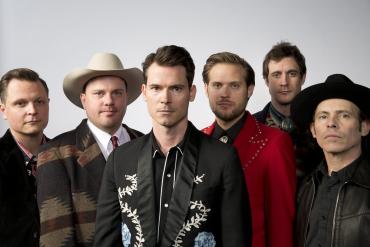 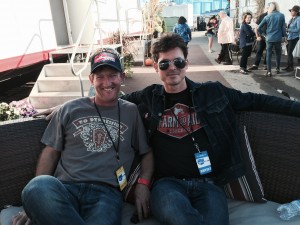 Ketch Secor is cool and collected when we are introduced. This is surprising since our interview takes place shortly after he led his band Old Crow Medicine Show in a scorching 30-minute set at Farm Aid 30. He wielded the fiddle with the skill of a champion fencer.

The Grammy-winning musician and I meet backstage. Settling in next to one another on a couch, across from the Imagine Dragons’ trailer, Secor is sporting Ray Bans and is diressed in a black Farm Aid t-shirt, jean jacket, and faded jeans. The sweat is still apparent on his forehead. He is mellow. He feels humbled that Willie Nelson included his band in the day’s festivities. We chat about “the archangel Gabriel,” a.k.a. Nelson, how it felt for Secor playing his first Farm Aid, the kinship he feels with fellow musicians at the annual benefit to support family farmers, and Old Crow Medicine Show’s journey from sidewalk buskers to Grand Ole Opry members.

We had a ball. It’s really cool being at Farm Aid. I really enjoyed putting it out there. They only give you 30 minutes, so you gotta pack it in. That guy, David Amram, he’s in On the Road, he introduced Bob Dylan to Allan Ginsberg, he was the understudy to Leonard Bernstein … he’s also so old that he calls Willie Nelson junior! Really a treat to make a new friend and share some music on the stage with him. It was our first time playing Farm Aid.

How did it come about?

Willie asked us and we were pleased to comply. Heck, I’ll go anywhere Willie asks us to go! I’d go to Waterloo. [Waterloo, Ontario, Canada is the town, west of Toronto, from where I hail.]

Anytime that a musician’s life is cut short like that it makes his body of work that much more important. There is something about singing a song that evokes more than just the music. Steve [Goodman] is from Chicago. Steve is the Chicago folk scene of the late 1970s. It is a great opportunity to evoke him here, plus we had Mickey [Raphael]. Anytime you get that guy … Willie Nelson has recorded a version and I first heard Arlo Guthrie’s version – didn’t hear Steve’s until much later – to get Mickey on that is so cool. We worked it out towards the end of the Willie Nelson tour we were on last month, working on “City of New Orleans.” David Amram was not rehearsed, however; Mickey introduced us backstage.

It’s kind of like standing on the stage next to the angel Gabriel. There is a deep spirituality that radiates out of him, out of his guitar, and out of him. Everything that is Willie Nelson has this spirit to it. I just want to bask in the light of this.

Looking back 15 years ago, is it hard to imagine how far you’ve come as a band, from playing the Grand Ole Opry to winning a Grammy for your last record and sharing the stage and touring with the legendary Nelson?

15 years ago I was standing outside of Willie Nelson’s bus, waiting for him to get off, to come say hello to the handful of fans that were there. I was probably higher than he was. I had my CD in my hand to give to him. It was our first record. He said he would listen to it. We got our picture made and we both had turquoise stones in our hats.

So it was fate then?

I had a feeling that I would see him again.

On Remedy (2014), winning a Grammy, and what’s next for Old Crow Medicine Show?

We are starting to write some new tunes and have just been thinking about Farm Aid for the last few days and here it is almost half-way over. It is such a particular thing. It’s like being invited to this family reunion and then you realize that you are related. You look around and you see your chin, and your eyes, and you know that you are kin.

So you feel a real kinship with not just the other artists, but the family farmers you’ve met today?

I feel a kinship with everybody here. I was a kid in 1985 [the year Farm Aid started] and it was something that my mom had me pay attention to. ‘They are doing something in Champagne, Illinois Ketch,’ she said. My mom voted for Walter Mondale the year before, so I knew that that made her different than anybody else. I didn’t know what was different about her, but she didn’t vote for Reagan.

Farm Aid Board Member Neil [Young] is very vocal about the family farmer issues; for him, part of the solution begins with pushing back against corporate America. What are your feelings on the Farm Aid cause and possible solutions? You said on stage, ‘Here we are Year 30, maybe we will solve this in Year 31?’ There has been progress, right?

I don’t know. There has been change, but is there ever really progress? Are those one in the same? Beats me. I also believe like Neil Young that a corporate hytocricy runs the show. It’s not true democracy. But, I don’t feel as a fiddle player that it’s my place to deal with those issues. I’m much more interested in making change on a community level. Talking to farmers here. I met this guy today on stage, Ben Burkett. Ben is a farmer from Hattiesburg, Mississippi. I asked him, ‘Have you read E.O. Wilson’s book, The Longleaf Pine, and he said, ‘Yes Sir and I’ve just plowed up 40 acres to do something about it.’

I come from the place that just might have the chance to save agriculture in North America. I wouldn’t ask Nebraska to lead the pack or Kansas or the Dakotas wherever the black soil is. Why shouldn’t they grow wheat for the factories? Why shouldn’t they grow wheat for the foreign markets? I live in the fertile American South and this is the place that can grow food. My state could grow food instead of California – you can grow food all year along in Tennessee, but we don’t. We grow corn like everywhere else. We grow whatever the market says is the thing to grow because of subsidies. I’m interested in helping to plow a new row in my home state.

For the rest of the day, I plan to enjoy the music, hang out, do some more press and share some fellowship with my fellow musicians. There’s Holly Williams [Secor points to the songwriter who brushes by us]. We talked about her grandfather, she’s great, she’s got a little baby. We were just talking about her grandfather’s museum in Montgomery, Alabama, where we just played. It’s a great opportunity to visit with other artists. We are all giving our time here. We are giving up our weekend to come together because we believe in Willie Nelson. Willie is the reason. We are all here because of our love and our respect for Willie Nelson. He is the great teacher. He taught us all, from Red Headed Stranger on down, what American songs can be about. You know, in all of them, they are about us.

Do you have a favorite Willie song?

Are you on the road again after Farm Aid?

We will play the Opry this fall, but touring is a little patchy at this time of year. We did our thing, it was great and fruitful. They call this, ‘laying by time.’ The reason that school starts so early in the south is because you had to hoe and chop because if you didn’t the cotton wouldn’t grow. We go to school August 8. It’s ridiculous. It’s 105 degrees out and kids wait for the school bus. These kids haven’t been in a field in three generations and these kids won’t go into a field and that field has a coming soon sign depicting a gas station with dozens of pumps and a grocery store with 6,000 parking spots.

And they call that progress?

Yeah, so 30 years of Farm Aid. Now, that said, I can walk a block from my house and buy goat cheese made two counties over wrapped in prosciutto that is cured in Tennessee. Then you go to the grocery store and everything is from California. The Canadian marketplace for food I find very progressive by comparison to the U.S. Because of the short growing cycle there is intensive agriculture. A grocery store in Quebec is amazing how much produce is grown there hydroponically. We eat Quebec tomatoes in Tennessee. They grow a bunch of damn tomatoes in Quebec!

Final thoughts, on No Depression.

I was glad to hear that No Depression is back on the shelves. It’s a good brand and was all through the 1990s. When we landed on the cover of it around 2003 or so, that was the only magazine that was ever going to put us on the cover and one of the very few that ever has.

A Kinship for the Land and the Music: Farm Aid 30 Kicks Ass in the Windy Ci...

Steve Earle: Chasing the Blues From Texas to Tennessee to NYC
Scroll to top