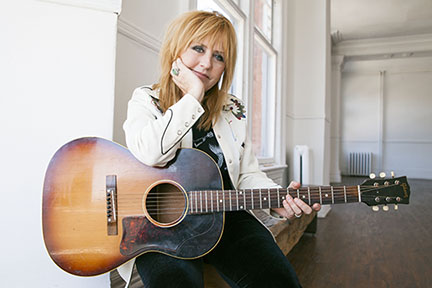 The first thing that grabs you is the voice. At times, it’s gentle as a summer breeze, at other times, its’ stronger than a hurricane blowing through town. The next detail one notices is the auburn hair. The third trait is the infectious laugh. That’s Lori Yates. On October 24, as the leaves fell throughout Southern Ontario, the Hamilton honkytonk queen — with punk and rockabilly roots and a long and storied career – picked up her Gibson guitar right where she last left off and returned with one of the years’ best roots records: Sweetheart of the Valley.

Yates and I meet on her home turf at the Mulberry Café on James Street North in downtown, one week before her sold-out CD release party at The Spice Factory. Over a latte and muffin, we share laughs and chat about the making of the record, songwriting, her love affair with Hamilton, and her ongoing musical journey.

Sweetheart of the Valley is Yates first solo recording since Book of Minerva (2011). Why so long? “I don’t know,” she says. “I have a family and it’s always a balance. People always ask, ‘Why don’t you just put out a record every year?’ It just seems to take me a long time.”

Right from the opening notes, the listener learns that it was worth the wait. Hey Stella! backs Yates. The all-star roots band is a group of old friends, who used to play a weekly gig at Ted’s Wrecking Yard, more than 13 years ago, when Yates lived in Toronto. The band features: Bazil Donovan (bass), Michelle Josef (drums), and David Gavan Baxter (electric guitar, mandolin and piano). The 12 songs were recorded at Baxter’s Hogtown studio (Knob & Tube).

The songs were all written over the past couple of years and the recording happened fast. “It felt like we were breaking bread together,” Yates comments. “It was a special time … I don’t think it will come around again.”

The storied songs speak to locales where she’s lived and the people who’ve touched her on life’s journey. Take “Corktown,” which describes the Hamilton rough and tumble tavern where Yates had a regular gig when she first moved to town.

Yates recalls the initial impetus to follow the white line from Toronto’s Parkdale neighbourhood to Hamilton more than a dozen years ago.

“The day we came to look for houses, it’s a cold February afternoon, I’m pushing the baby carriage and there is not a soul in sight,” she continues. “We walked down Jackson Street. I looked up and there is Frankie Venom (lead singer of Teenage Head) on his balcony having a cigarette. I turned to my husband and said, ‘Oh my god Terry there is Frankie’ because I’m a huge fan. He’s like, so what? But, for me, this was an omen … I never saw him again in the city, just that one day, and it just felt right.”

Everything about Sweetheart of the Valley also feels just right; Yates is so happy with the result. Spend an afternoon with these dozen tunes and you are sure to agree. Just listen to that voice and – like the wind – let it carry your troubles away.