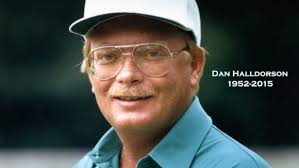 Richard Zokol gazed Thursday at a 23-year-old bottle of Dom Perignon on his shelf and wept.

The bottle of vintage champagne was a gift from his good friend, Dan Halldorson. The Canadian Golf Hall of Fame member died this week at his home in Cambridge, Ill., at the age of 63.

News of the native Manitoban’s death shook up the Canadian golf world Thursday. Zokol spoke about the special gift he received from his confidante, friend and former playing partner after Zokol won the Greater Milwaukee Open in 1982 for his first PGA Tour victory.

“I’ve never opened the bottle and I never will,” said the 57-year-old when reached over the phone in Vernon, B.C., where he now lives. “It brings back great memories.”

Zokol learned about his friend’s massive stroke when fellow Canadian Golf Hall of Famer Dave Barr called with the news. Shortly thereafter he reached Dan’s wife Pat, who confirmed the news; the pair shared tears and many memories.

“Dan became a very close friend over the years,” Zokol recalled. “He was a soft-spoken person and a man of few words, but he was lovely to be around. We spent over two decades travelling together, playing many practice rounds together, in major championships, and in regular PGA Tour events. We went out to dinner together often and drowned each other’s sorrows in the bar into the late hours of the evening when we missed cuts.”

At times, over the phone, Zokol’s voice was shaky as he shared memories about his departed friend. Now that he’s gone, Zokol stressed there will be a lot of celebration of his life – giving this quiet, unassuming friend, who not many truly knew, the tributes he deserves.

“It’s time to celebrate the great man that Dan was,” said the two-time PGA Tour winner.

Zokol shared one fond memory from a time the pair was playing the Dunhill Cup qualifying tournament in Singapore. “We were taking the ferry back from the golf course and Dan was exhausted. It was hot and I was in a kidding mood. He had to get away from me because he couldn’t rest with me around since I was always tickling him behind his ear.

“I waited for him to go find some solitude somewhere; he fell asleep and I walked up behind him and tickled the hair on the back of his neck. I remember him coming right out of his skin. I laughed like crazy. He got so mad at me, but that is what friends do.”

Coach. Mentor. Friend. Quiet and unassuming. Fun to be around. A gentleman of the game. Those are just a few of the words and the phrases shared by those who knew Halldorson well when asked to remember his legacy — on and off the course.

Lorne Rubenstein, a fellow Golf Hall of Fame member, and one of the finest golf writers this country has known, was saddened by the news.

“Dan was a great guy and a big supporter of Canadian golf … He was fun to watch. Like Bruce Lietzke, he always hit the ball the same way almost every time, he didn’t try to hit many other shots or mess around too much.”

Rubenstein added that, even though Halldorson was a quiet guy, whenever the golfer spoke, you listened. “You knew he just didn’t say things frivolously or for a quote. He put a lot of thought into whatever he said and he also had a dry and rye sense of humour. Besides the writer/golfer relationship, I just enjoyed being around him. He made you feel good.”

John Saksun who founded golf club manufacturer Accuform Golf in 1975 (which Halldorson represented his entire career) spent a lot of time with the professional golfer over the years; he always enjoyed his company. Saksun was shocked by the news of his friend’s passing.

“Dan was only four months older than me,” he said.

Saksun learned the bad news from Halldorson’s daughter Angie. Like Rubenstein, he spoke of his late friend’s great sense of humour. “He was a quiet guy, but he could really crack you up too,” he recalled. “I remember being at PGA Tour events and laughing most of the round with him … he had to back off many of his shots.”

Halldorson will be dearly missed by the Canadian golf community. He had many friends and spent a lot of time helping grow the Canadian Tour, ensuring that future generations had a place to hone their game and take one more step towards their dream of making the PGA Tour.

Appropriately, his widow Pat has said she will take her late husband’s ashes to St. Andrews, where they will be spread at the home of golf.

As the golf industry learned news of the Canadian golf legend’s passing, many via social media, the tributes followed fast from friends, fellow golfers, and industry colleagues.

Dan Halldorson’s competitive accomplishments as an amateur and professional across the provincial, national and international golf landscape included:

Keeper of The Greens: Tom Vlach