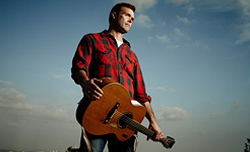 Corb Lund is a lover of all things country — well at least all things that are not mainstream Nashville country. That, he could do without. Lund is all about staying true to his rural Alberta roots and using his experiences as a way to explore universal themes in his music. On his latest disc, Hair In My Eyes Like A Highland Steer, the roots songwriter was lucky enough to work with some veterans of the country and folk music industry, namely Ian Tyson and Ramblin’ Jack Elliot. While driving through Saskatchewan, Lund recently took time out from staring at the endless fields of wheat to chat about his relationship with these musical icons, his thoughts on Nashville and the buzz of playing live, whether for 12 or 1,200 people.

ChartAttack: Your most recent album was recorded in Nashville, but I know you don’t characterize your music as mainstream? How did you end up in the Music City and what are your thoughts on this musical milieu?

The thing that is interesting to me is that in this day and age a lot of the straight country stuff is pretty formulaic. My thing is that I’m a real fan of regionalism. I know guys that are shooting for that mainstream radio play and they write songs about Nashville and they write songs about California… I’m not criticizing it, but it’s just not how I would approach it. There are so many people making fake music and I just don’t relate to that. I write about what I’m familiar with. Nashville really does have a really cool underbelly. There are guys that go there because they are great players. There is also a really wicked history there with The Grand Ole Opry and Patsy Cline and stuff. The other thing is that when you record there if you need a wicked ragtime piano player there are three of them in your Rolodex that you can just call up. Harry [Stinson, producer] knows the right guy to get the right vibe on a particular song.

Tell us about your relationships with veterans such as Ian Tyson and Ramblin’ Jack Elliot, both of whom make guest appearances on your new album?

One of the most satisfying things of this whole thing is meeting the older generation. I got to know the Good Brothers last year and that was cool. With Ian it was inevitable that we would meet eventually. We both live in Alberta and we both have the same Western themes in our songs and we are on the same label. I met him a couple of years ago and he’s been a really good friend, he’s a sweetheart. He’s been very supportive and helped me out with a lot of press, helped me on the front end of a lot of important shows. He’s become a really interesting friend to hang out with. After the first couple visits… every once in a while it will dawn on me that this is the guy that wrote, ‘Four Strong Winds’ We have good talks. He’s like a walking encyclopedia of cowboy history.

I met him when we played some shows together a few years ago and we hit it off. I called him up and asked if he wanted to sing on this blues song (‘The Truck Got Stuck Talkin’ Blues’) on the new album and he said sure. His whole thing is talking. We did a few takes of the song in the studio and he’s telling all these amazing stories, so finally we just said hit the record button because the story before was even better than the one before. He lived with Woody Guthrie when he was in his teens and he was a big part of the New York/Toronto folk scene in the ’60s.

I’ve heard that playing live is the ultimate high for you. What is it about the live experience that makes it one of your favourite things?

One of my favourite things to do is sit in front of like six people and just play songs and chat. The communication aspect of it is what I really like. I’ve always felt sorry for painters and novelists because someone might come up to them and say they’ve read their book or that’s a fantastic painting, but with music you get instant feedback. You play for an hour and a half and it’s like a conversation. And you can feel it when you are connected with people. It’s a rush and I love it. We have all been to one of those special gigs as an audience member and it’s even better if you’re the one playing… if it’s going well. When I was a kid and getting into bands, the guys I always thought were the real thing were the guys in the punk rock band that would pull up to your town in a dirty old van and get out all scruffy and walk out and they could kick your ass. The guys that could pull it off live were it.