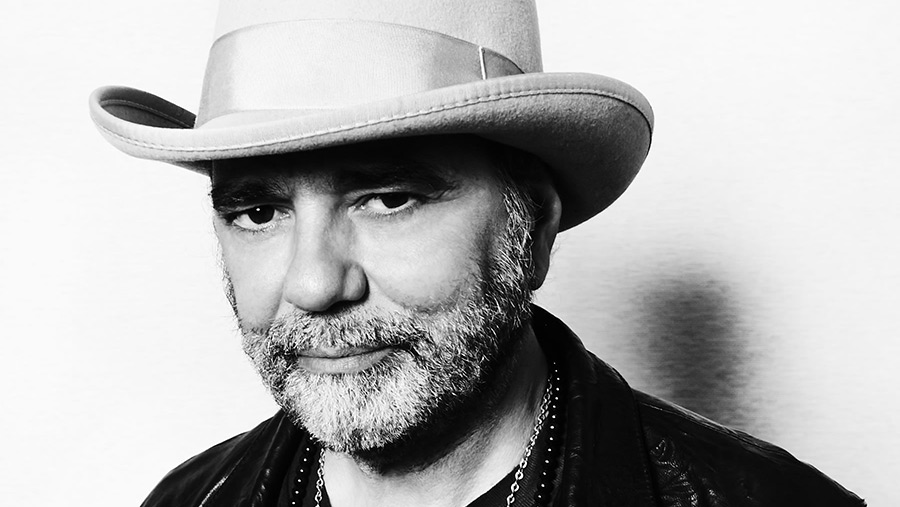 As I exit the elevator into the fourth-floor studio/loft, I spy 10-time Grammy-Award winning producer and singer-songwriter Daniel Lanois playing the piano, singing a song from his first feature film Here is What Is, which premiered at the Toronto International Film Festival this past September. Several assistants are busy answering phones and prepping for a TV interview later that afternoon; Lanois is lost, trancelike in his music. Lyric sheets and phone messages are scattered in the middle of the hardwood floor and instruments are everywhere — from a pedal steel he’s had since he was a teen to a wall featuring a dozen electric and acoustic guitars. There’s no questioning I’m in the presence of a mastermind.

The passion from this Canadian genius is genuine as we spend an hour chatting like old friends on the black leather couch in his Toronto studio. Surrounded by instruments, Lanois is like a child discovering music for the very first time, with each new sound he creates – whether it’s on pedal steel, acoustic guitar, or an antique player piano.

Sensing a fellow music lover, Lanois lets me play his Martin D-28 acoustic, crafted from the finest Brazilian rosewood. I strum a few chords and then return the guitar to the guru. Another vintage instrument — a Gibson SJ-200 (circa 1940), which he says was given to him by Emmylou Harris, is also on display; he tells me nonchalantly it’s worth about $20,000.

“I try to keep as many instruments around as possible,” he explains. “My old formula is still with me. When I was a kid, I wanted to work in a recording studio and I couldn’t get a job in one, so I started my own. I looked around at other studios where I was working as a session guitar player and noticed the Toronto engineers would let the band set up and then they would accommodate that setup by pulling the necessary microphones out of the closet and building the technology around the band, which makes sense.

“But, then I discovered a more Jamaican way of working,” Lanois continues. “The Jamaican folks had their sounds all ready in the studio before the musicians came in. They didn’t wait to be dictated to by the combo. As Chris Blackwell told me once, reggae music was not invented on the street … it’s not a thing that was happening in the parking lots, the roadsides and the hills as you might think, but it came out of the recording studio. The studio people like Lee Scratch Perry were highly inventive. They built up their own sounds with their own echo machines and with the limited equipment they had, they developed a sound. Then the singers and players would come in and they would cater to that feeling that was already set up.”

From early on, Lanois followed this Jamaican model in the studio: building his own sounds to set himself apart from his contemporaries.

“I started plugging stuff in when I was a kid and discovered sounds I liked,” he says. “Then, when people came into the studio, I would show them my sounds … people were always excited … having my own sound meant I stood out in the crowd a little bit … I wasn’t like every other record maker, which is a good piece of advice for anyone who wants to do this kind of work.”

He likens this approach to a door-to-door salesperson.

“When I show up at Sinead O’Connor’s house or U2’s studio, I don’t just turn up with a toothbrush,” Lanois says. “I’ll present The Edge with a new pedal perhaps that he doesn’t know about or I’ll present a riff that I’m excited about … I let them hear it and see if it rocks the house.”
Over the years, the über producer has been lucky to rock the house and share riffs with everyone from Bob Dylan and Emmylou Harris to Aaron Neville and U2. While Lanois’ learned a lot from all these musicians, it’s fellow producer/musician Brian Eno with whom he shares a special relationship.

“We share an interest in soul music of the past and the future,” Lanois explains. “We grew up with similar influences. Eno grew up near a U.S. military base and there was a lot of rock ‘n’ roll and do-wop music at the base, so that always resonated with him. Eno is an incredible innovator and loves to challenge every situation with his sonics, which is fantastic.

“Eno and I are full of surprises,” he adds. “We are good in a workplace because we can conjure something up right on the spot. That’s what’s fun about having us in the room and I believe that’s our most valuable commodity to U2.”

Currently, Lanois and Eno are working together on the new U2 record. He says he’s keeping his mouth shut about the sessions, which have taken place in Fez, Morocco and France to date, but he does say that “we’ve got some gems already.”

Speaking of gems, when it comes to musical influences, Lanois is partial to the cultural revolution of the 1960s, which is a touchstone he always returns to – artists like Jimi Hendrix are innovators he always admired.

“I liked the fact I was living at a merging point,” he explains. “I was hearing Buffalo and Detroit radio stations, which had a really good serving of rhythm and blues and soul music. Then, when the psychedelic era came, it was just an extension of this merging … people who were singing folk music were now rock singers … they were not loud sounds, but they had rock in their souls. That always stayed with me … I’m still fascinated with mixtures and think there is plenty to still invent through crossing musical styles and riffs.”

Lanois reveals his secret to success is due to “feel.”

“Feel is a place you hope to get to when people congregate,” he says. “You hope spontaneity will be your friend and there will be some kind of combustion that relates to that moment, which funny enough usually operates outside of the confinement of preconception. Unlike architects, we of the music world can make something up on the spot and improvise … that’s the luxury of our position. It’s really an area of strength for me to look around the room and say, ‘I see what we have access to here,’ whether there is a certain kind of mood to that morning. It’s almost the responsibility of that team to accommodate that mood rather than tell it it needs to be something different.”

As I exit the elevator from the musician’s studio, I slip on my iPod. As the first notes begin to take me away, I can’t help but wonder if I’ll ever come close to appreciating music in the same way as the master I just left behind.