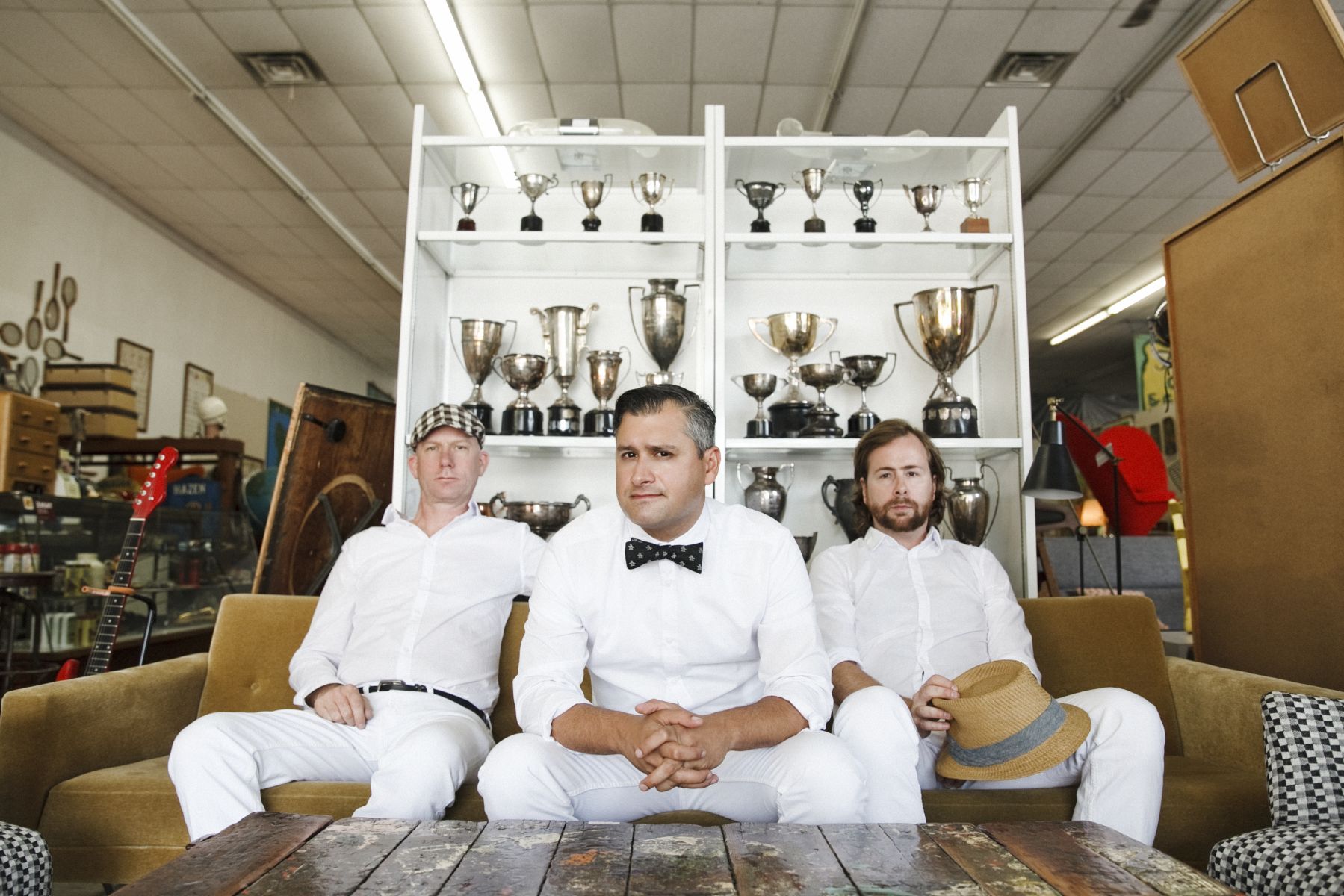 Elliott Brood isn’t out to conquer the world, they just want to make a living doing the thing they love: making music. Moving from Toronto to Hamilton allows them to do just that.

  On a grey day in early January, I meet two-thirds of Elliott Brood — Mark Sasso and Stephen Pitkin — at their rehearsal space in downtown Hamilton. Inside, a collection of guitars, uku- leles, banjos and mandolins greet me — the tools that shape the band’s sound.

Pitkin sits on a row of seats taken from their tour van; Sasso straddles an amp. On the floor behind Pitkin
is a beer fridge, a 12-pack of empty Heineken bottles and a case of Coke.
Sasso and Casey Laforet (the third member of the group) grew up in Windsor. As teens, they bonded over Neil Young, The Band and The Flying Burrito Brothers. Pitkin later fell into the group after working sound at one of their concerts when the trio lived in Toronto. The band’s name derives from a bastard- ized homage to the femme fatale character in The Natural.

Elliott Brood started with a punk DIY ethos. These days, they treat the band as a business, but the punk at- titude remains. The band’s sound has matured over the past decade. 2008’s Mountain Meadows was shortlisted for the Polaris Prize and Days Into Years won a 2011 JUNO for Roots Album of the Year. Their most recent disc, Work and Love, also received a JUNO nod. The songs on their last record were shaped by the members’ move out
of the GTA — a decision sparked by a desire to live somewhere less expensive and more family-friendly.

“Hamilton feels a bit like the 1950s where kids can still run around and be kids … that is what we fell in love with,” Sasso says. “There is also opportunity here. You can use the city as a jumping off point as opposed to when I grew up in Windsor; if you were a band in Windsor you died a band in Windsor… you had to leave to ‘make it.’ In Hamilton, it’s not that way.”

“You don’t feel like there are obstacles the same way you did in Toronto where everything is expensive, there is so much to do, you have to work to live…more of a New York atmosphere,” Pitkin adds. “Here, it’s like a fresh breath.”

As 2016 begins, Elliott Brood is planning its next record. Prior to Christmas, the trio encamped to a cabin on a lake in the Kootenay Mountains near Kaslo, B.C. They hunkered down and recorded the skeletons for three tunes. “One of
the songs just jumped out while we were sitting on the porch,” Sasso says. “The songs are interesting…a little bit quieter; hopefully, they stay that way.”

Whatever way the new songs stay, Elliott Brood are just happy they can work full time in their chosen craft.

“We didn’t set out to conquer the world,” says Pitkin. “We are just a bunch of guys who love making music together.”
“It’s a great path,” Sasso adds. “Sure, we would love to make way more money, but we are doing great. We are playing music for a living. Isn’t that success? You get to raise your children and do the thing that you love.”