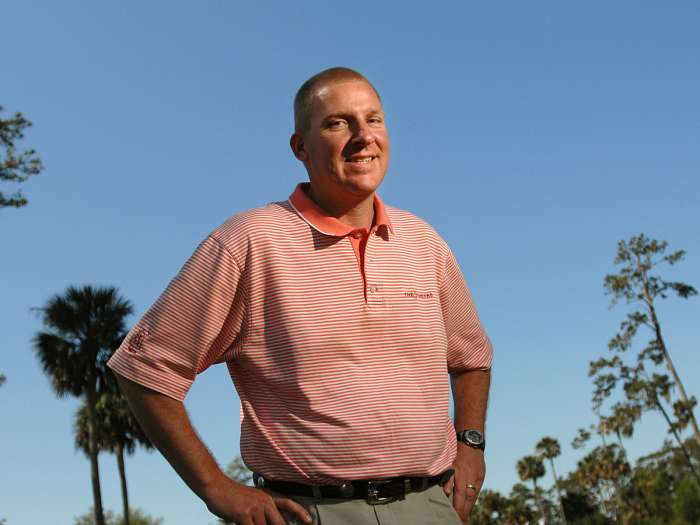 There’s more to the sport of golf than swings and slices. With an assist from the UW’s soil science department, this Badger turned his interest in the game into a career, helping others to get the most out of their golf experience.

Tom Vlach ’91 keeps a large white- board next to his desk, though very little white space is left on it. It’s filled with scribbled plans, procedures, key dates, and weekly schedules.

The board is Vlach’s road map for the work that lies ahead in the weeks and months to follow: his detailed plan to make sure the Stadium Course at TPC Sawgrass in Ponte Vedra, Florida — where Vlach serves as the director of agronomy — is ready to host the world’s best golfers when the PGA Tour’s Players Championship comes to town in May.

Agronomy is the science of soils and plants, meaning that Vlach does more than watch the grass grow. He applies the tools of research to maintain his course in top condition.
Prepping for the Tour’s “unofficial fifth major” — with its purse of nearly $10 million, and sixty thousand specta- tors expected daily — is no easy task.

It requires long hours and a collaborative effort: measuring soil temperatures, growing the grass to the right heights, aerifying greens, monitoring green speeds, trimming trees that could endanger spectators, and working with countless contractors who install the acres of corporate tents, skyboxes, and television towers. The task list seems endless.
And as soon as the PGA Tour leaves town, Vlach and his crew start preparations for next year’s event.
Running a top-level golf course leaves little time for leisure. Maintaining the greens where the well-heeled play and fans watch the sport’s best perform takes a talented team of seventy-five full- and part-time staff and an addi- tional eighty volunteers. Vlach’s role is to “cast the vision,” and his staff carries it out. But it took a Badger education and a career’s worth of experience to teach him how to see what a course could be.

                    Vlach grew up in Lake Geneva, Wis- consin, where he spent his freshman year of high school before moving with his family to Coral Springs, Florida, for his sophomore, junior, and half of his senior year. The move south was fortu- itous — it exposed Vlach, up close, to the PGA Tour. At the time, the Honda Classic was played at nearby TPC Eagle Trace. A teenaged Vlach volunteered during the event, working with the turf and maintenance crew to fill divots and rake bunkers. Cue Vlach’s Aha! moment.

“I realized this is what I wanted to do for a living,” he recalls.

But it was the UW that taught Vlach how to turn that interest into a career. His family returned to Wiscon- sin at the end of his senior year in high school, and he enrolled at Wisconsin due to its reputation. “It was big in agricul- ture,” he says, “and it was also close to home.” As an undergrad, he connected with adviser Wayne Kussow, a profes- sor in the soils department. “He took a personal interest in me,” Vlach says. “He guided me into classes when he felt I was ready for them, not what the cookie- cutter approach was. … He opened his lab for me right on campus, making it convenient to always have a place to study in between classes.”

After graduating, Vlach discovered that being a Wisconsin alumnus auto- matically made him part of an elite club. He quickly found his first job at TPC Sawgrass as a crew foreman.

“I got some experience, and then I made my next career jump,” he recalls. “From there I went to my first superin- tendent’s job. At twenty-three, I was the youngest superintendent in the country and also the youngest nationally certified greenskeeper in the United States.”

He soon became head superinten- dent at Twin Rivers in Obiedo, Florida, and two years later was superintendent at a Golf Digest Top 100 club: Pine Tree in Boynton Beach, Florida, just south of          Palm Beach, where he served as the direc- tor of golf maintenance in the mid-1990s.

“That was a big jump up,” Vlach says. “That club was the wealth of America, and they had high expectations. Mem- bers included Rush Limbaugh, Mario Lemieux, as well as golfing greats Sam Snead, Karrie Webb, and Beth Daniels. It was definitely a ‘golfer’s club.’ ”

Vlach spent five years at Pine Tree rebuilding the golf course, then moved on to Birmingham, Alabama, where he settled for ten years. In 2008, he received a call that a longtime friend at TPC Sawgrass was retiring. The opportunity — and the itch to return to a course that hosted a PGA Tour event — were too strong to resist. Five years later, he still loves the daily challenges of his job here.

Two months before the 2013 PGA Tour tournament, Vlach and his crew are in overdrive mode, knowing that the details of landscaping can make the difference between the event’s success or failure. The PGA Tour is Vlach’s boss, and its headquarters are on site. Each year, the Tour requests changes to the Stadium Course: challenges for the world’s best golfers, and enhancements to make the fans’ experience — whether in person or on TV — more enjoyable.

This year the club decided to construct a series of buildings to house permanent restrooms for the players and patrons so that it can dispense with portable toilets. But adding plumbing to serve tens of thousands of impatient spectators is no simple task.

“That’s a lot of bathrooms to build!” Vlach jokes. “But one of the biggest comments we get from customers who purchase tickets for a nice skybox is that they have to go to the bathroom in a portalet. We are really trying to change that image and let people know that if you are flying here from Spain to watch a golf event, we can at least provide you
with a bathroom.”

In addition, Vlach has had to re-landscape the spectator mound behind the seventh green to make it easier on fans. The slope must be steep enough so that those in back can see over those in front, but not so steep as to hurt their ankles as they stand for hours. “There’s a certain pitch we aim for,” he says. In the coming years, he’ll have to match that pitch on other holes as well.

These are the concerns that drive modern golf courses.

“Greenskeeping today is becoming much more of a business,” Vlach says. “You need to be a well-rounded superintendent. The days of just being a good grass-grower are over. You have to be able to manage budgets, and you have to be able to work with people. You are not on an island down in the shop anymore.”

  Lessons from the Gridiron
Golf and football may not have much in common, other than that both are played on grass (or a rea- sonable facsimile). But Tom Vlach cites Barry Alvarez, the UW’s former football coach and current athletic director, as an indirect mentor.
In 2003, Vlach was working as the director of golf maintenance at Greystone Golf and Country Club in Birmingham, Alabama,
when he was elected president of the Alabama Golf Course Superintendents’ Association. Alvarez heard this news and sent a congratulatory note, saying that he had made Badgers everywhere proud.

“That was a very motivational letter, which I still have today,” Vlach comments.

Since then, Vlach has followed Alvarez’s career. Last fall, the superinten- dent returned to Madison to show his two eldest daughters the campus. While there, Vlach made sure they attended the football game against the University of Texas-El Paso. On game-day morning, he ran into Alvarez, who posed for a picture with Vlach and his daughters.

“It was neat being at the UW while [Alvarez] was rebuilding the foot- ball program,” Vlach says. “The team was horrible when he arrived, so it was great to see someone come in with a plan and a vision. I learned a lot from his philosophy, which was, simply: ‘You can overcome obstacles if you surround yourself with good-quality people.’”
  
   
By the Numbers: The PGA Tour’s Players Championship Preparation
    $80,000:
Total expenses for TPC Sawgrass’ volunteer program
170:
Total tournament staff for 2013 event
80:
Number of volunteer turf staff brought in from around the world
24,000:
Number of annuals planted prior to the tournament
200:
Approximate tons of Florida Rock 302 T sand added to bunkers begin- ning in February to repair sand traps after resort guests’ use
30:
Number of staff required to rake
the bunkers by hand each day begin- ning one week before the Players Championship
18 BADGER Insider
30:
Number of semi-trucks of pine straw applied throughout the property
10:
Number of turf crew who run hoses
each evening to treat hot spots
60,000:
Approximate number of people who attend the Players Championship daily during the tournament