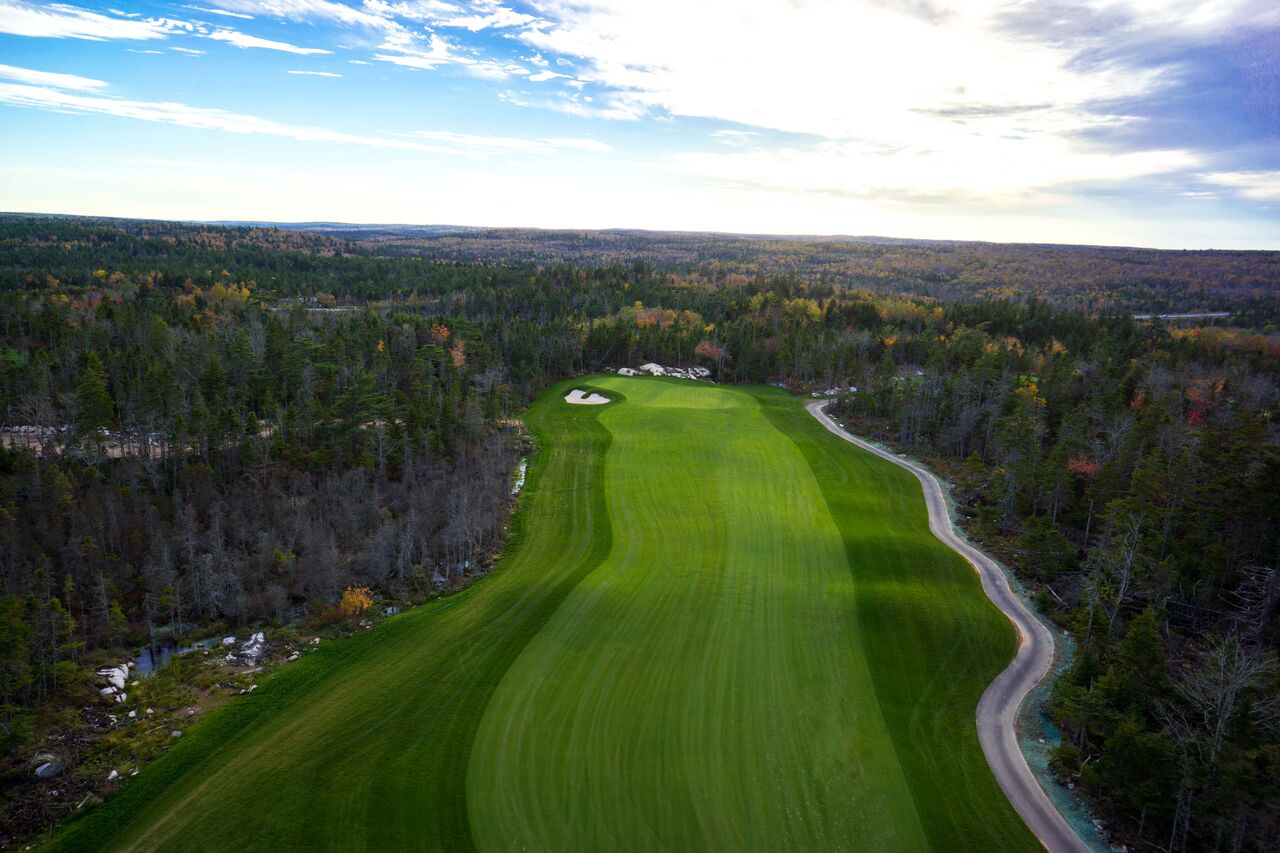 It’s been 20 long years, but early reviews indicate the wait was worth it when The Links at Brunello—the first new course to open in Halifax, N.S. in two decades—takes its first tee time come July.

“Everyone last summer was making a joke that we haven’t had a new golf course locally for 20 years,” says superintendent Chris Wallace. “Now we’ve got Brunello and Cabot Cliffs opening this summer; there’s also talk of a new Jack Nicklaus course in the works. That many new courses in one province is almost unheard of in the golf industry today.”

Originally from Prince Edward Island, Wallace joined the Brunello team last summer during the grow-in, coming from Big Sky Golf Course in British Columbia where he had spent more than 20 years as general manager and superintendent. “I always wanted to come home, I just didn’t know it would take this long,” he laughs. “It’s a very good ownership group and the course is going to be outstanding.”

The Links at Brunello is part of a 3,200-unit master planned community that covers approximately 520 acres. The vision of a pair of cousins (Rob and Glen Dextor), 48 per cent of the site remains golf course or natural green space.

“In the world of land development, that is quite an achievement,” says vice-president of development Andrew Giles. “The owners had quite a vision of a top-quality community that was well-built and well-designed. That also formed the underlying principles for the golf course construction.”

Award-winning Canadian golf course architect Tom McBroom (Rocky Crest, Lake Joseph, Tobiano, Crowbush Cove) was retained nearly a dozen years ago. The project took a while to come to fruition since the client didn’t want to start construction on the golf course until the real estate part of the development took shape.

“We had a terrific site with rambunctious land and lots of trees and rock,” says McBroom. “It has a Muskoka or Tremblant feel. One of the things I tried to do in the design, even though it was part of a big real estate development, was I didn’t want to have the residential impede on the golf course. There is residential around it, but we’ve tried to set it back as much as possible, so it’s out of sight and out of view.

“I also tried to take inspiration from the way classic courses looked … ones that don’t feel modern,” the architect adds. “This was a great opportunity to do that because the land was so strong. If we could go at it with a classic vision in mind, the lines would tie back to the natural grade and there would be very little artificiality in the presentation of the course.”

Once the construction was in full swing, McBroom was hands-on.

“It was a pet project of mine,” he says. “I was probably in Halifax 40 times in the last two years … it’s got my fingertips on it that’s for sure!”

The golf course is surrounded by almost 20 hectares of wetlands; that was one of the challenges faced by the project team. The team disturbed only 3.9 hectares of these environmentally sensitive areas with either the golf course or residential development. McBroom rerouted the course to take these wetlands into consideration. The architect managed to get all 18 in on a full course with minimal impact to the wetlands.

“We had to tweak and massage the design to incorporate the wetlands,” he says. “That’s tricky because you don’t want them to come into play. The golf market today is all about playability; fun is more appropriate than toughness or difficulty. We didn’t want toughness, length or difficulty, but the course will still be a challenge from the back tees.”

Golf course construction started in 2013 and spilled into the winter of 2014. That’s when the course really got going. The first phase of the residential development had already been completed a couple of years previously and there are many more phases to come for the planned community. After a tender, The Links at Brunello hired Montreal-based NMP Golf Construction.

McBroom had specified a sand cap on the entire course. The team spent about 18 months doing field tests to make sure they chose the right fill. Besides NMP, experts hired and consulted included: John Kelly, a golf course drainage expert also from Montreal, and USGA agronomist Jim Skorulski. Once the sand cap was chosen, about 110 tons of the material were imported to the site from 120 minutes away.

A key for the owners, according to Giles, was they wanted the course to drain quickly after a rain event, so carts could get back on the fairways without delay.

“That is part of why we wanted to ensure the right sand cap,” he explains. “We accomplished that by time and by hiring the right experts. The other key was taking John (Kelly’s) drainage advice. He put in a lot of swale drainage (about 3,500-plus metres) after construction, which helped drain the sand cap, and that’s what allows the carts to go on shortly after a rain.”

A need for the right seed

The other aspect the Brunello team spent a lot of time researching during the planning phase was the selection of the grass seed. This important decision was mainly left to Paul Stephens from Pickseed in Ontario, who recommended a Mackenzie and Tyee creeping bentgrass blend.

“This grass fits the climate,” says Wallace. “The nice thing about this area is we have a lot of wind, which is a great complement. Nothing I saw in my first year showed it was going to be tough to maintain this grass based on our climate.
“New bentgrass has an advantage for the first five years since it’s pretty tough,” he adds. “A long winter like we just had, with lots of snow, actually helps it.”

The project was broken down into key deliverables. Excavation on the site started in 2013 and when the spring of 2014 came, the team was in a good position to finish the irrigation, drainage, sand cap and seeding.

“We did 18 holes from May 2014 to Labour Day,” says Giles. “NMP had a full crew of 50 guys, plus there were dedicated irrigation guys working here, too, seven days a week, non-stop.”

“We had a very dry summer, which was a bonus that no one could have predicted,” Giles adds. “Because it was so dry, and we were doing the grow-in on 18 holes, the water demand was big. To alleviate this, three artificial ponds were built on site. We had the capacity for about 10 million gallons of water in these ponds and used nearly all of it.”

When they open this summer, Wallace says the biggest challenge he and his crew will have from a turf and maintenance point of view is simply managing the course with all the projected traffic.

“Early season bookings are already substantial,” he says. “We are going to be busy right out of the gate. I’ll need to keep an eye on the overall product to make sure it doesn’t get beat up too much.”

Wallace initially plans to have a crew of between 15 and 20 as he figures out the proper mowing and maintenance schedules this may change.

“The biggest hurdle to maintenance is how spread out it is,” the superintendent says. “Carts are mandatory because of the separation of the holes.”

Leave the last word to McBroom; he says The Links at Brunello is a great addition to the Halifax market.

“They have not had a good golf course since Glen Arbour opened about 20 years ago. You think of other major golf markets, you had a lot of new courses in the boom years from 1995 to 2008. They are playing catchup now. Coupled with the two Cabot courses, Nova Scotia is going to be back on the golf tourist map.

“What I like about the course is that it feels like it’s been there for 100 years. That is something I’m pretty proud of.”