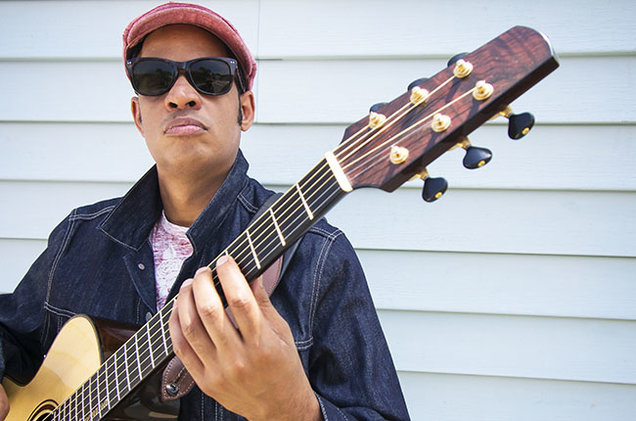 With performances on David Letterman, The Tonight Show With Jay Leno, and The Late Late Show With Craig Ferguson behind him, plus rave reviews already in for his major label debut State Of Mind, New York-based songsmith Raul Midon continues to turn heads. His live performances are known to leave people breathless and hypnotized with his soulful delivery and accomplished percussive finger-style guitar playing. Midon’s father was a professional dancer, originally from Argentina and he tried to get his son to dance, but Raul was too self-conscious. Instead, he admits that he banged on things as a kid and that’s how he developed his unique guitar style, along with a lifelong love for songs and songwriting.

ChartAttack: As a blind person, how do you “see” the world?

Raul Midon: The closest way that I see the world other than living in it is through literature. In literature pictures have to be described with words, so it really helps me imagine a lot of things, which is what you have to do when you are blind. In a way, it’s also a disadvantage as a songwriter because I tend to be very psychological as a writer. I mean, I ask myself, “Can I write about a sunset if I’ve never seen one?” The answer is that the sunset has to be symbolic in some way for me to write about it… maybe it always is anyway. I know that I’ve worked with DJs and they are always looking out and seeing how the audience is responding to something and performers do that. Maybe it’s better to just be yourself and let them respond the way they are going to respond.

What makes a great song?

I think there has to be a central idea that you’re talking about… an idea with a twist. I always like to be surprised. I like good melodies somewhere in there and then the twist in the lyrics, a song that you thought was about a great relationship turns out to be about a relationship that never was, anything like that is something that I love. And I just love great wordsmiths.[Midon quotes the Cole Porter love song “Laura”]”Laura is a face in the misty light/ footsteps that you hear down the hall/ a laugh that floats on a summer night/ that you can never quite recall”
That’s an incredible lyric.

Writing a song is not writing poetry, the words have to sound good and they have to sing good. You may have a lyric that is very meaningful, but it doesn’t sound good. There is a lyric that I love from Tapestry. I always love the song “Too Late”… “Something inside has died and I can’t hide and I just can’t fake it…” It just sounds great to sing, it’s a great lyric.

Who influences you outside the world of music?

I’ve always been influenced by people who transcended. I mean Martin Luther King knew he was going to give his life for what he did. Malcolm X, Gandhi is a transcendent person, maybe some people who died for what they believed in. It wasn’t a media hype thing. What is so ironic about it is that they died; yet they are immortal. They are going to be influencing people from now until the end of time.

Corb Lund: Embraced By the Old-timers