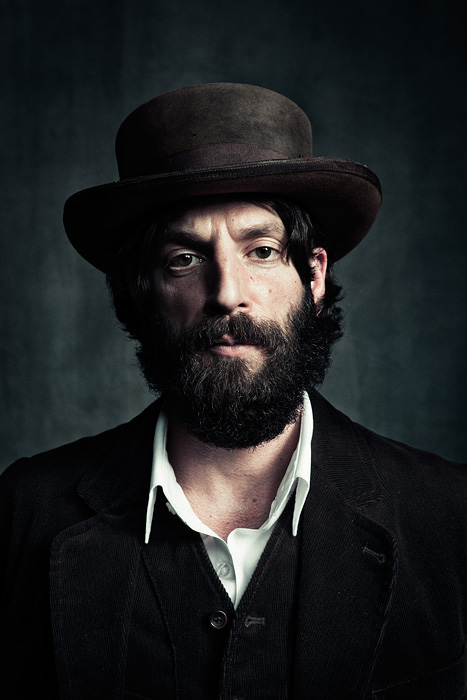 On the title track from his major label debut Trouble, Ray LaMontagne sings that he’s been “saved by a woman.”

Resting at home in Freeport, Maine with his wife and two sons – before heading back on the road to promote Trouble – the humble 31-year-old songwriter talks about his musical journey. There’s no doubt that a woman helped save LaMontagne from his troubled past, but initially this worried man’s soul was saved by music.

It was a day like any other six years ago when LaMontagne’s alarm clock radio went off at 4 a.m. and he had an epiphany. The sound that came from this early morning wake-up call was unlike anything he had heard before. The song was “Tree Top Flyer”, the artist was Stephen Stills, and something in the music moved LaMontagne, awakening his spirit. He didn’t go to his job that day, which at the time was a stint at a shoe factory in Lewiston, Maine. Instead, LaMontagne spent the day browsing the local record stores, finding the Stills’ album Stills Alone, and starting to dig all sorts of music.

“I just got really psyched about music all of a sudden,” he says. “I hadn’t really before. I’ve always liked music. My father was a musician … I don’t really know my father and I don’t really want to at this point … that’s a whole other story.

“There was music in the house when I was really young,” he continues. “I dabbled with instruments as I grew up: saxophone, drums, but I never stuck with anything for various reasons. Then as I got into my teen years I totally pushed music out because it was like my dad and I didn’t want to be like my dad at all, so it became totally out of the picture.”

Listening to Trouble, one gets a clear picture of the pain and suffering of his past through his emotive voice and personal lyrics. LaMontagne is candid about his life before he had this reawakening.

“In my early twenties I went through a really hard time,” he reveals. “I had bouts with serious depression and suicide. Then I discovered Stephen Stills and I got really excited about music and I just started listening to records all the time.”

These records — from Bob Dylan to the Band — became LaMontagne’s refuge and his education. “I had no friends, but I had records,” he says. “Man, I just lived in those records. I would listen to one side, flip it over, and then flip it back to side one again … I consider it like my schooling.”

LaMontagne has been busy making records independently since 1999. He made three on his own and then signed with a publisher (Chrysalis) before he had a record deal. This came about through a chance encounter with a fan that had a friend in the music business. Six months after Chrysalis signed him, he made Trouble with Ethan Johns (the Jayhawks, Ryan Adams) with the hope that maybe an independent label would pick it up. What ensued was a bidding war, which RCA Records won.

When LaMontagne initially signed the publishing deal, which he stresses was “really modest,” he hoped that other songwriters might cover his songs. “That was my first thought,” he says. “I remember coming home and being excited and talking to Sarah [his wife] and saying ‘maybe someone will sing a song or maybe we will get a song recorded by someone else and make a little money.’ That’s a pretty exciting thought from where we were. I was just working carpentry, playing gigs here or there and hawking my own records at 10 bucks a pop whenever I could.”

Making the transition from carpentry to composition, it’s no surprise that it took the songwriter a long time to discover his approach to penning words and music.

“In the beginning I tried the disciplined approach and tried to write every day, which just led to so much frustration that I wanted to blow my brains out,” he says. “I eventually have come to figure out that for me the melodies come and they come often and I just put them on tape.

“Then there comes a point … it’s like the train in the distance thing … you know that they’re coming,” he continues. “What happens is that I know that I’m having a creative spurt coming. It usually lasts about three weeks, sometimes a month. For some reason the stars are aligned, who knows, but for that month I can take things from beginning to completion.”

From working in a shoe factory to singing songs for a living, Ray LaMontagne’s musical journey is far from complete. With a voice that combines the soul of the late Ray Charles, with the grit of Otis Redding and Van Morrison, LaMontagne is poised to make a career in the music business.

“I just hope that I can earn a fan base that will stick with me for another record and another and another,” he concludes. “If that happens I’ll be a happy man.”

For Corin Raymond There Will Always Be a Small Time