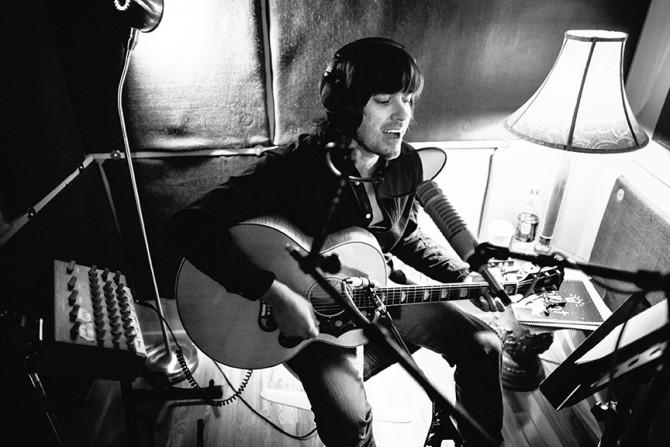 When I speak with Rhett Miller he’s enjoying some rare quiet time at his home in upstate New York’s Hudson Valley. Things are especially quiet today because his wife took their two-year-old son Max and one of his friends off to the mall to get their pictures taken. As 2005 draws to a close, Miller can especially use this R&R since next year is set to be a busy one. The singer/songwriter is currently taking a break from his Old 97’s mates, but that doesn’t mean his muse is slowing down. Miller will release his second solo disc, tentatively titled The Believer, on the relaunched Forecast/Verve label at the end of February. He’ll tour behind this release with a new hand-picked band. He’s excited to be on a label that was once home to seminal artists Frank Zappa and Velvet Underground one – of his favourite bands growing up. Miller and the Old 97’s also recently played a part in the romantic comedy The Break Up, starring Vince Vaughn and Jennifer Aniston. The brainy Miller took time recently to chat with ChartAttack about this Hollywood experience, music and politics, amongst other things.

ChartAttack.com: Tell us about your experience working on the upcoming Vince Vaughn/Jennifer Aniston romantic comedy The Break Up?

Rhett Miller: The penultimate scene takes place at an Old 97’s show in Chicago where [Aniston’s character] gets stood up and sits in the front row of the balcony crying. It was pretty cool… it was kind of a big deal. It comes out the same week as my solo record, so I figure it will do some good for the whole enterprise. Vince Vaughn is a fan and the guys he wrote the movie with are fans and apparently they listened to us a lot as they were writing the movie. The Old 97’s performed four songs in front of like 1,200 extras. It was bigger than filming a video because there were all the extras and Jennifer Anistonâ€™s security team were presidential in scope. It felt like a big deal because this many years into your career without having any gold records or huge success, it was nice for the little perks to come along and remind you that you havenâ€™t been entirely forgotten.

What inspires you to do a solo record?

I’ve always known that I would do solo stuff because the Old 97’s are such an opinionated, democratic situation. There is a lot of “no” that got said. There still is, but that’s the nature of a band because it’s the four different takes on what sounds good that makes a specific sound. So, I finally got to do it because the other guys were starting to have kids and we had been together long enough that it felt like we didn’t have to be constantly out there killing ourselves on the road. Artistically it’s been great because I get to do all sorts of stuff. On this new record coming out in February there are a lot of strings and some bigger, grander sounding moments on it that I never would have been able to do with the Old 97’s. It has kept the whole career fresh for me because I can do everything… I feel lucky that I get to have both.

How do you feel about Texan George W?

I don’t know if you’ve noticed but our president is a joke … it’s a little embarrassing. While I’m a proud Texan, I’m not so proud of the Lone Star State representative in the White House. I felt so bad during Bush’s first term when one of your politicians [Carolyn Parrish, a former liberal who remained in office as an independent] got drummed out of office because she called Bush an idiot.

How do you reconcile your personal politics with the music?

I don’t talk politics at Old 97’s shows. I’ve done it a few times and I ran into trouble. I did contribute a few songs to a pro-John Kerry, anti-Bush project before the last election. It’s a weird time now where you can point out so many things going wrong in our world, but I don’t feel you can do anything about it. And, frankly, I’ve never felt like it was the job of the musician to constantly comment on society. I would rather write an op-ed piece for The New York Times, rather than sing about it. I don’t like to listen to songs about politics, so I wouldn’t want to sing them. I just sing about girls and stuff like that.

What do you like to read and where do you find inspiration for your songs?

I like stories… the arc of a good story. You can’t escape the truth and there is a lot of non-fiction out there that is interesting and moving. But I really like fiction, contemporary stuff like DeLillo and David Foster Wallace and older stuff like Nabokov. I read a lot, but there is so much in life that you go through personally and you watch your friends and loved ones go through that there is never a shortage of fodder.

Tom Wilson: The Age of Battles

Corb Lund: Embraced By the Old-timers
Scroll to top