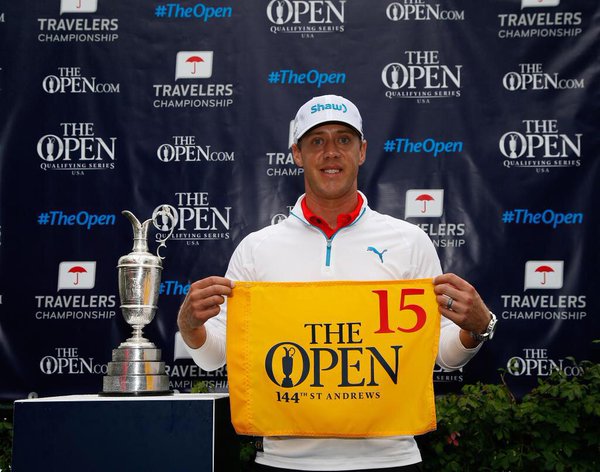 From Fear the Beard to Shear the Beard. Sometimes, as the saying goes, a change will do you good. Graham DeLaet can attest to this adage. His decision to shave off his facial hair certainly played a mental role in the Canadian’s play this past weekend at The Travelers Championship.

“I was playing some bad golf this year, so I kind of just needed a change,” DeLaet told the Hartford Courant last weekend about this new look.

That change — and more importantly his improved on-course play — contributed to DeLaet’s best finish of the season: fourth place at The Travelers at TPC River Highlands in Cromwell, Conn. It was his first top-10 finish since February. While that first PGA Tour win continues to elude the Canadian, he can take a lot of positives from this performance.

Despite getting off to a sluggish start with a double-bogey at the opening hole and finishing his round with a bogey Sunday, DeLaet produced four birdies in between to finish with a one-under-par 69. Watch his beautiful approach on the 71st hole.

With the top five finish, the Weyburn, Sask. native vaulted 20 spots in the FedEx Cup race — from 103 to 83 — and he’s also closing in on $1 million in earnings for the season ($942,167). Most important, he punched his ticket for The Open next month at the home of golf – St Andrews.

DeLaet entered the Travelers Championship ranked No. 92 in the world rankings. Since only the top 50 as of mid-May get an automatic entry into the British Open, he had to play his way into (the four highest finishes by golfers not otherwise qualified at the Travelers received exemptions) the major. The 33-year-old was the highest finisher without a spot already locked up, so that’s not a bad consolation prize. The Canadian makes his third consecutive appearance at The Open.

Here’s what he told The Open.com after getting the invite:

“I was standing on the 18th tee knowing that I had the third spot in The Open. When I hit my tee shot in the bunker all I could think was, ‘I really hope this doesn’t cost me my spot’. But it ended up being just enough. It’s an awesome Championship and it’s at the home of golf so I can still leave here with a smile on my face.”

Oh Canada, we stand on the tee for thee

Looking beyond DeLaet, the top Canadians in the FedEx Cup race are: Nick Taylor (85) and David Hearn (88). Besides this trio, more homegrown players than ever are teeing it up most weeks on the PGA TOUR including: Mike Weir, Adam Hadwin, Brad Fritsch, and Roger Sloan, but the top-10 results are not there.

It’s just the nature of golf. The difference between the top 50 and top 150 is a couple more bogeys on the card, a few wayward drives, and some missed putts. Those tend to be the result of mental mistakes. Several of the Candadians are closing in on $1 million in earnings or have already surpassed that figure (Taylor thanks to his win last fall at the Sanderson Farms). Many a 9 to 5er would be happy with that kind of money for eight months’ work.

Hearn not taking his foot off the pedal despite homecoming

Serena Ryder: Is It O.K.
Scroll to top