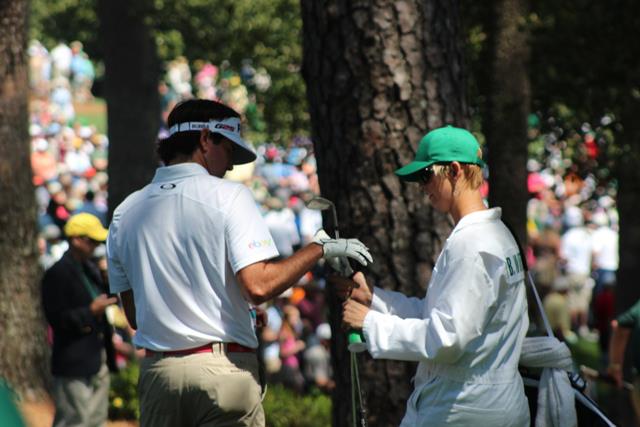 One pimento cheese sandwich: $1.50. A no-name domestic draft in a plastic Masters cup: $3. A pair of kids’ T-shirts from the souvenir shop: $48. One patron pass to stroll the rolling fairways of Augusta National Golf Club the day before the first round of the 2013 Masters: priceless.

On Wednesday, April 10, I visited the hallowed Georgia golf grounds for the first time. It was a pinch-me moment from the time my pass arrived in the mail until I boarded my return flight from Charlotte, North Carolina back to Toronto.

Many Canadians make this same pilgrimage each April. Some drive; some fly. Some come with buddies; others with wives. Some rent a house in the Augusta area. Others stay 60 miles away across the state line. No matter where they rest their heads, or from where they come, all make the journey for the same reason: to experience what makes the home that Bobby Jones built so special.

The 2013 Masters was extra special for Canuck golf fans as it marked a major milestone. Flash back 10 years: Mike Weir – the loveable lefty from Bright’s Grove, Ont. – became the first Canadian to win the green jacket in a moment the nation will never forget.

Weir played the back nine alone on Wednesday afternoon, trying to work out the kinks with his caddie. After searching for him all day, I met a group of Canadians near the 17th tee who had been following his practice round. Like me, the four friends from our nation’s capital were making their inaugural trip to Augusta. Tax season was not going to stop these accountants from creating their own Masters memories. Two are retired while the others still practice with the Carleton Place accounting firm of Nephin Winter and Bingley.

How did they get tickets? “It’s a long Story,” laughed Bob Winter. The short version: his wife’s dentist won four day passes in the Masters lottery last year. Somehow, after asking around, Winter and his three number-crunching colleagues were the lucky recipients of the tickets.

From meetings like these to watching the par-3 contest, my Masters experience was magical. There are too many memories to cite them all, but here are a few more highlights of this whirlwind trip.

On Tuesday evening I attended Canada Night at the house Golf Canada rents near Augusta National each year. Grilled steaks and casual conversation were the order of the evening. I met many golf industry executives and fellow members of the media Lorne Rubenstein and Bob Weeks. Rube, a mentor of mine and friend, kindly introduced me to newly-inducted Canadian Golf Hall of Fame member Jim Nelford and others in attendance such as USGA Executive Director Mike Davis and Steve Mona, CEO of the World Golf Foundation.

By 8 a.m. Wednesday morning I was seated aboard a media shuttle inside Augusta National’s gates being whisked to the press building. While waiting for the Golf Writers Association of America’s AGM, I perused a golf magazine in the green arm chairs. Gerry Dee – the star and producer of the award-winning CBC TV show Mr. D – walked by. We shared a few words. The Canadian comedian is also a part-time sports journalist for The Score.

Flash ahead to 3 p.m. that afternoon. As my dream day at Augusta came to a close, I spotted Weir under the big old oak tree – the famed spot where media gather to catch players for impromptu interviews. In the shade of this mighty oak I chatted with Kevin and Mary Bennett of Seaforth, Ont., who drove 15 straight hours to attend their fifth Masters. Kevin’s brother Steve is a longtime friend of Weir’s.

All these Canadians came to Georgia in April for the chance to be a patron for a day. To see the tree on No. 10 where 2012 Masters champion Bubba Watson hit his miraculous snap-hook in last year’s playoff. To see the magnolias, azaleas and dogwoods in full bloom. To see how green and pristine Augusta National really is. To sit awhile at Amen Corner and eat a pimento sandwich. Like me, they came to witness, up close, what makes this golf tournament a “tradition unlike any other.” Let me tell you, the experience is priceless.