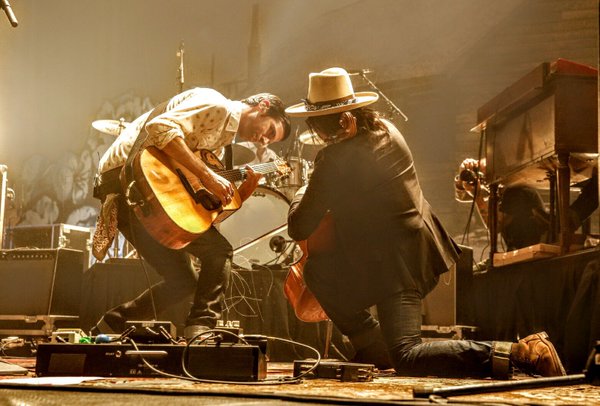 Scott Avett passes time at the Starheel in Charlottesville, Va., as his heavily touring band the Avett Brothers get ready to open up for Michelle Shocked that evening. The band is busy working on a few new songs, so this helps pass the time that Scott labels, ‘hurry up and wait.’ During this waiting period, the 27-year-old banjo picker is only too happy to talk about his band’s unique brand of mountain music.

“I always like talking to someone that is willing to listen.”

Upon a first listen, the simple, honest, back porch songs weave their spell on an unsuspecting listener. Soulful singing and two-part sibling harmonizing is combined with some hooting and a hollerin’ and some rhythmic pickin’. It occupies a space somewhere between bluegrass, alt.-country, juke-joint era jazz and folk. Groups such as The Band and early Uncle Tupelo share some of the Avett’s acoustic leanings.

The Avett Brothers, based out of Concord, N.C., near Charlotte, are currently touring throughout the U.S. promoting their fifth release – Mignonette recorded this past spring with 17 songs and more than 70 minutes.

The title was taken from Neil Hanson’s book The Custom of the Sea about an English yacht – the Mignonette – that sank in a storm in 1884 off the coast of Africa. Four survivors escaped in a small dinghy without food or water. After 19 days, the men killed and ate the weakest member of the crew. Five days later they were rescued and the Captain Tom Dudley – a man of honor – told the story of the cannibalistic act they had participated in to the Crown. His honesty got he and his surviving mates a charge of murder brought against them and a date with the Gallows Pole.

The Avett Brothers stumbled upon this story and found Dudley’s honesty an inspirational tale that helped shape their album. This broad concept of candor was then weaved into the thematic structure of many of the songs.

“When the concept came, it helped us to conclude it and put it all together,” says Scott, describing the album’s evolution. “We were really moved by that – a true story that was amazing – and felt it was really noble what he (Dudley) did, and we couldn’t really let go of that.”

“Swept Away (Sentimental Journey)” the hauntingly beautiful track that opens “Mignonette” features a duet with the Avett’s sister Bonnie.

“Bonnie had never recorded before, so it was something we knew would be as natural as you can get,” he says. “It wasn’t going to be someone jumping in there – a senior at it…she was definitely a freshman at it, but we knew that it would probably capture some of that, which would be great because she’s got a great voice.”

The lyrics to this song epitomize the Avett’s honest and simple approach to songwriting with words such as “Who cares about tomorrow/What more is tomorrow/ then another day.”

Making music for the Avetts is truly a family affair, and without brotherly love, this partnership wouldn’t have survived the rigors of the road. The two brothers (Scott on banjo and vocals and Seth on guitar and vocals) comprise two-thirds of the unorthodox power trio. Bob Crawford on standup bass joins them. The group originally started in 1998 as a side project to their then rock band, Nemo.

For “Mignonette,” their father Jim Avett also contributed his original recording of “Signs.” Seth’s wife Sarah also adds a violin on the latest of the “Pretty Girl” series of songs, “Pretty Girl at the Airport.”

“As far as working with family, Seth and I get along real well,” Scott says. “Early on we had taken some trips on our own – self-motivated panhandling trips across country where we would just play wherever we could. During those trips, our father had told us you are each other’s best friend and you are going to get irritated with each other and frustrated with each other. But, you can’t let that take over…there is a lot of bad out there, and you have to depend on each other.

“If we are going to start to argue, eventually we just shut up.”

Mignonette adds three new songs to the now five-song pretty girl canon – the aforementioned “Pretty Girl at the Airport,” “Pretty Girl from Cedar Lane” and “Letter to a Pretty Girl.”

Scott explains how this repeating group of songs came about. “There’s a story in that,” he says. “It started with a song that was going to be called ‘A Song for Robin,’ but in an attempt to disguise it for the sake of one of the fellas in the band in trouble with his girlfriend, we changed it to “Pretty Girl from Matthews.” In that change, we thought about it and were like well Jimmie Rogers did that with Blue Yodels and just numbered them and just did that over and over… the subject matter is endless.”

“They are not necessarily love songs…I don’t think really any of them are,” he continues. “They are just experience songs with the person in mind that we are writing about…that’s just where it’s just kind of carried on.

“I mean there are zillions of beautiful woman. So, the series may never end.”

Until more pretty girls are found, Scott reveals that a live record from 2004 shows has been recorded and needs mixing. Here, according to Scott is where the band’s sound is best appreciated. “Our live show is truly how people get it (our music) a lot of the times,” he says. “It’s much more raucous than the record…they can be similar to a hard rock show sometimes.” The band hopes to release this new offering in next six months.

“We don’t really know how much time we have in this life,” he philosophizes. “So, the way Seth and I go about it is by continuing to write, continuing to write and just try to put as much as we can. I got a feeling that before we know it, we’ll be old and we’ll be looking back, so we are going to get as much recording down as we can.”