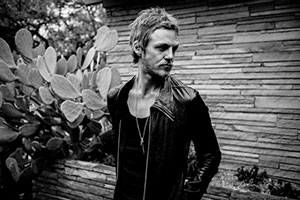 A southern drawl drips from Charlie Mars’ lips between sips of coffee as he deconstructs the South – the musical milieu from where his songs were spawned. Over lunch at Toronto’s Rivoli, a day before his show at the legendary Horseshoe Tavern, the 29-year-old songsmith looks like a man that has been surviving on little sleep. The rock singer is a little haggard since he’s been on the road for more than six months, averaging six shows per week and eating a few too many cheeseburgers. Sporting a Willie Nelson tour T-shirt and a black jean jacket, Mars drowns himself in caffeine.

Mars released three independent records from 1995-2000 and recently signed with V2 Records. Since his self-titled big-label debut was released this past May, rave reviews in major music magazines such as Rolling Stone and Tracks have followed. In his early days of touring, Mars followed the well-traveled path of rock ‘n’ roll excess, but wisely realized that this couldn’t continue.

“You start a band, you make a record, and the next thing you know you’re being paid to play rock ‘n’ roll and there’s free alcohol and a lot of time to drink it,” he says. “I was a little younger and wanted to have a good time, meet people, get drunk, party and experience all that that had to offer, but hey, at some point the party is over. “I think I have a much better balance now.”

Like his name, Mars’ sound is a little otherworldly; it features an atmospheric ambience that echoes Coldplay, mixed with vocals that emulate U2’s Bono to create a hook-laden Southern Rock opus. Mars hails from Oxford, Mississippi, a rich cultural area where Nobel Prize-winning writer William Faulkner spent most of his life. Mars’ blood runs deep in the South. Raised on chicken-fried steak and sweet-potato casserole, his great, great grandfather was from Mississippi and his family still calls the area home.

As he jokes, “If you ever get arrested down there, give me a call and I can help out.”

“The tradition of secrecy that exists there is conducive to the confessional aspect of singing and writing songs,” he says.

“If you read Faulkner or a book by any Southern writer that’s what comes into play. To a large degree, that’s why I started writing songs. If all you’re seeing is the sunny and the light it’s [the dark side] there somewhere and nobody’s talking about it. The artists usually end up being the ones that carry that weight.”

“I also think that the humidity, the heat, the climate of repression and the shame that is carried culturally from slavery, and the need to compensate for that provides further inspiration,” he continues.

While Mars is enjoying the rock ‘n’ roll ride – adding his own chapter to the South’s songwriting history – he has no false aspirations about his musical future.

“You got to roll the dice and then when everything falls apart you pick up the dice and roll them again,” he concludes. “That’s the way the music business works – expectations are just a resentment waiting to happen.”