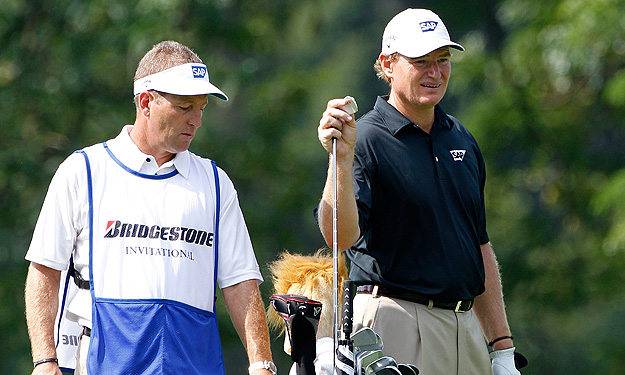 Of the two caddies that Ernie Els employs during the year, Ricci Roberts was on the bag last week at Royal Lytham & St. Annes when Els claimed his second British Open title. But don’t feel too bad for the other guy.

Several hours after Els hoisted the Claret Jug on Sunday in England, Dan Quinn won The American Century Championship — a celebrity tournament; Quinn is a former NHL player — across the pond at Edgewood Tahoe Golf Club in Nevada to complete one of golf’s most unique daily doubles.

The two are reunited at this week’s RBC Canadian Open. On the car ride Wednesday to Hamilton Golf & Country Club, Els and Quinn discussed the fact that it wasn’t the first time they had won both events on the same day.

“He started winning that tournament 20 years ago; he won there in 1992, and also in 2002 when I won my other Open,” Els said. “Then, I win the Open this year and he wins the same tournament also in the same year …

“It’s funny how things come together.”

Quinn watched early action of the British Open on Sunday before heading out to his tournament. While Els made a back-nine charge and took advantage of Adam Scott’s collapse down the stretch, Quinn followed a few hours later by overtaking former NFL quarterback Mark Rypien to win the event in Tahoe.

“The players at the British Open teed off at 6:10 a.m. my time, so I would wake up, have breakfast and then watch three hours of golf before getting ready to play my game,” Quinn said. “I didn’t see the final putt or final hole as I was playing, but it was a special day I’ll never forget.

“He’s such a great player,” Quinn said about Els. “I was so happy for him after all the hard work that he’s put in.”

Els and Quinn became friends through their daughters, golf, and a couple of barbecues. This later led to a caddying gig that became serious in 2010 when Quinn did a full-time share with Roberts — each of them working 14 events for Els that year.

What some may not know is that Quinn was a key cog in the Calgary Flames’ run to the Stanley Cup in 1986, and later played alongside Mario Lemieux with the Pittsburgh Penguins. Now the Canadian is back in his home country in hopes of extending Els’ winning streak in national opens to two consecutive weeks.

“It’s going to be great to have Dan back and listen to him,” Els said. “It will be a nice change of scenery.”

Quinn admitted he’s feeling a bit more pressure this week following Els’ major victory. By the time they hit the first tee on Thursday, however, he’s sure his nerves, and any butterflies his boss may have, will settle fast.

“Once Ernie and I get out there, he hits that first ball and we get inside the ropes where he’s the most comfortable, we will be fine,” Quinn said.

After a celebration with his family and friends in London on Sunday — and a day of rest Monday sleeping in and hanging out with his kids — Els arrived at the Hamilton course by helicopter Tuesday afternoon to play five holes.

On Wednesday morning, he played with Gord Nixon, President and CEO of RBC, the sponsor of Canada’s national open and one of Els’ main sponsors.

The 19-time PGA TOUR winner has never seen the historic Hamilton Golf & Country Club before this week. Neither he, nor his caddie consider it a negative factor.

“A lot of times if you haven’t played a course you don’t know where the trouble is,” Els joked. “Maybe that’s a good thing. You get your yardage, you hit your spots and from there you go to your next spots.”

While the course is not familiar to Quinn, he’s happy to be in well-known surroundings this week.

“My mom, brother, sister, and a lot of my friends live in the area,” Quinn said. “Growing up, I was a huge golf fan and I used to watch in person when the Canadian Open was played at Glen Abbey for years.

“Last year, to be inside the ropes at Shaughnessy and then Hamilton this year, feels great. I’m really excited about the week.”

After this week, Quinn will carry Els’ bag for the next three weeks, including the last major of the year — the PGA Championship at Kiawah Island.