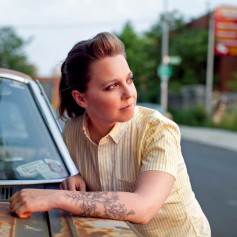 While attending college at Brown University in Providence, Rhode Island, Virginia-born singer-songwriter Erin McKeown lived in an art co-operative; this is where her true education occurred. Earlier this summer, following an early morning wake up for an appearance on Canada AM, and prior to killing time before her headlining show at the Drake Hotel later that evening, the cerebral 27-year-old songsmith took time to chat about her university education, her love of Latin and her iPod.

Erin McKeown: What helped my musical career was to be in classes with people that didn’t think anything of the fact that I would leave to go on tour with Ani DiFranco. I needed two weeks off in my senior year because I had been asked to go do that tour. The other people that I was in class with were leaving to go make a movie or their father was the King Of Monaco. It really wasn’t a big deal because of the kids that were at the school that I went to, so it just drove me to work harder.

Providence is an amazing city. I didn’t live in the part where the university is. I lived in another part of Providence, in the downtown, which is a redeveloped Arts District. I was a resident artist in a cooperative space there for three years. It was there that I learned how to have a daily life as an artist and to figure out what I needed to do to pay my rent, to have regular shows, to meet other people who for the last 20 years had made their lives as artists; even something as simple as there was a seminar they offered us once on taxes for the self-employed, functional things about being an artist and then more life-sized things. I wouldn’t have found that if I hadn’t gone to college in Providence.

Why all the Latin phrases on the album?

The whole record is built around a phrase “Per Ardua ad Astra.” It’s the motto of the Royal Airforce and it means “Through struggles to the stars.” At the time that I was starting to formulate my ideas about this record I heard that phrase and I had taken a lot of Latin at school and it just kind of hit me. It’s just a sentiment that I really liked. The word ardua means hardships and another word for hardships is “aspera.” It’s more of an adjective than a noun. It can mean rough or difficult, and it can also mean thorns or brambles. So, “par aspera through brambles to the stars” forms a theme for the whole rest of the record. “Through troubles, through hardships to the stars such that birds in flight and the sky” this idea of lifting through difficulties is carried through on all the songs. I think it developed into a more spiritual thing.
There is a second part of the phrase that literally means “my body may change, but my spirit will stay” which is the words to the middle section of the song “Aspera.” Again, that is something that is carried through on the rest of the record. There will always be these changes that happen in your life, but at the centre of it there is still something that’s you.

Why did you choose to record the album in New Orleans?

A friend of mine who lives there came to see my show and afterwards she said “let me show you New Orleans,” so we took about a day and a half not sleeping and just visiting all these great places. It made me fall in love with the city. It was important for me to see it during the day and it was also important for me to see it at night.
There’s a real spirit to the city. It’s rundown in a lot of ways, but not defeated. It’s just a really beautiful place architecturally and even in the most dilapidated parts there is still a lot of beauty. It seemed like the right place to come back to and spend a month making a record.

Tell me about your iPod?

My iPod is my best friend. I love to put it on random and just see what comes up. I don’t have a TV and I only just recently got high-speed Internet, so iTunes is a new world for me. I’ve been enjoying that a lot. I’m likely to download any kind of song. As a musician it made me like music again. So much of how you hear music for the first time is about the context of it. That’s the great thing about the shuffle. All the time stuff that’s on my iPod that I didn’t remember is there or hadn’t listened to in a long time will come up and I think “Man this is so good.” If I had sought it out or someone had put it on my desk and I had to listen to it, I probably wouldn’t feel about it the same way. It’s just in that set up of complete surprise when you are open to the newest things.

Cycling is Like a Drug For Jeremy Fisher
Scroll to top