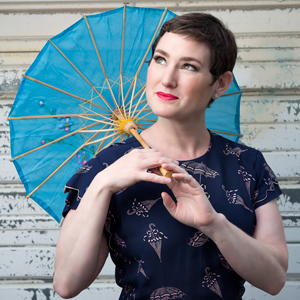 Growing up in Vancouver in the post-punk days, singer/songwriter Oh Susanna – a.k.a. Suzie Ungerleider – was surrounded by a generation who harbored a lingering attitude that it wasn’t cool to have ambitions. Thanks to her parents and her belief in her music, the giggly and gregarious woman with the engaging voice overcame this slacker mentality.

“When I was growing up you had to act like you really didn’t care about your future or becoming successful,” she says.

With a voice as powerful as Dolly Parton’s and an attraction to the Americana tradition, Oh Susanna has taken her music to a wider audience. Her latest album – a self-titled effort on Nettwerk Records – features an all-star backing band that includes producer Colin Cripps, Blue Rodeo’s Bazil Donovan, The Sadies’ Travis Good and Luke Doucet. To date, her previous disc (the independently released Sleepy Little Sailor) has sold 20,000 units worldwide. While it’s still too early to compare life with Nettwerk versus doing it independently, Ungerleider clearly sees the advantages.

“It helps me to relax and not have to organize so much,” she says. “With Nettwerk, I feel that there is this whole structure supporting me. I feel now I am ready to trust someone else to do it, whereas when I first started, I didn’t know that much of how labels worked and all I heard were horror stories.”

Ungerleider was born in the United States and moved to Canada at a young age. While she feels Canadian, she has always been drawn to our southern neighbors; to their culture, their history and to their music.

“When I was a kid, I was very aware that I was from another place,” Ungerleider says. “My dad lived in New York and Miami Beach, and he met my mom in California. American Graffiti was set in the town where my parents met and at the time, they were graduating from high school, so they told me, ‘That’s what our existence was like.’ They felt this Hollywood interpretation was their life. I was envious of that and I developed a fetish for ’50s cars, Marilyn Monroe and James Dean.”

It’s not surprising that Oh Susanna often draws from these American pop culture traditions as the muse to her songs.

“The expression of woe and despair and being trapped in this factory job or murder ballads … that was all a part of the imagery that I grew up with,” she says.

Americans love myths and creating figures that are larger than life; this is what attracts Ungerleider to the U.S. culture.

“All the stories of America are so flamboyant,” she explains. “I find Americans are braggers, so they’re masters at propaganda and storytelling. That’s the whole thing about the great figures in American history. They’re almost charlatans; they created this myth about themselves so they would be successful. I think Canadians are more humble, so they’re not as good at publicity and manipulating.”

I’ll Carry for You: Artist Pens Tribute to Henderson Sisters
Scroll to top