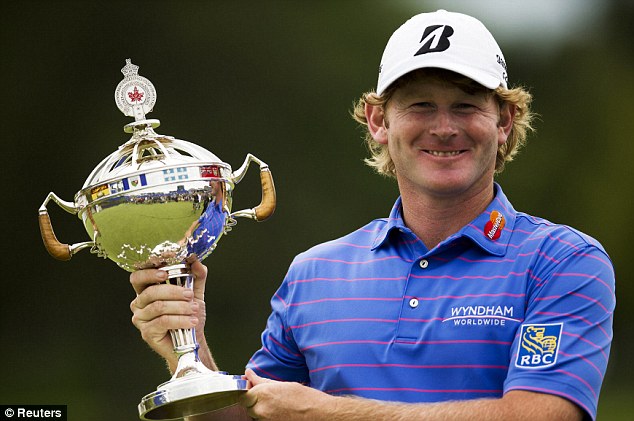 Sipping a bottle of Molson Canadian beer during the media press conference, Snedeker was all smiles. He talked about how much it meant for him — and his caddie — to win Canada’s National Open.

“I’m just ecstatic,” Snedeker said, reflecting on his sixth PGA TOUR victory. “This is a tournament I said early on in my career I wanted to win just because my caddie is from Canada and it’s his national open. It meant a lot to him and it meant a lot to me. It’s the third oldest tournament on TOUR and it’s got some great history to it, and now to put my name on that trophy it means a lot.”

After an eventful Saturday that featured a weather delay, the overnight leader Hunter Mahan withdrawing, and loads of low scores, normalcy returned to Glen Abbey on Sunday. Gusty winds — especially in the Abbey’s valley — made birdies elusive. Not that it mattered to Snedeker. He made four birdies to go along with two bogeys for a 2-under 70. That was good enough to notch his second victory of the season and sixth of his career.

“I hung in there really well and made the key putts I needed to and I was able to survive,” said Snedeker, the reigning FedExCup champion who, with the win, moves up one spot to No. 3 in the 2013 FedExCup standings. “That’s what today was all about.”

Snedeker is in great position to become the first FedExCup champion to qualify for the TOUR Championship by Coca-Cola to defend his title. The previous five FedExCup winners all fell short of a return trop to East Lake.

Thanks to a flawless 63 Saturday, Snedeker started the final round with the lead. And, he kept it. When questioned after the third round about the importance of this position, he said that was crucial.

“My last two wins on TOUR have been from in front, so I know how to handle it, know what to expect tomorrow,” he said Saturday. “Especially on a golf course like this, the lead doesn’t really mean a whole lot. It can change in a hole.”

Dustin Johnson found that out the hard way on Sunday. With one swing of his driver everything changed and Johnson’s chances to win his second tournament of the year were squashed. Even having his celebrity girlfriend Paulina Gretzky being police-escorted alongside him Sunday afternoon couldn’t alter fate.

After an eagle putt on 16 that narrowly missed, Johnson tapped in for birdie to temporarily tie Snedeker — who was playing two holes back. Then, the unthinkable happened. The 29-year-old stepped to the tee on the 436-yard par-4 17th and opted to use driver instead of a fairway wood. The result: Johnson sailed his tee shot out-of-bounds right — his first wayward drive of the day. His second swing wasn’t a whole lot better. His ball landed in the bunker on the left side of the fairway.

Facing a steep lip, Johnson took two swings to get onto the green, followed by two putts to make a triple bogey. He bounced back with a birdie on 18 to finish in a four-way tie for second.

“I was playing really well,” Johnson said when asked about his choice to pull out the big stick on 17. “I was really confident and swinging the driver really good … it’s a driver hole for me, but I just blocked it a little bit and made a poor swing.”

“I had no clue,” he said. “I don’t look at leaderboards because you can’t control anything anybody else is doing. My whole goal today was to go out there and shoot as low as I possibly could … and that’s what I did.”

By the time he strolled down the 18th fairway, Snedeker felt like the tension was out of the air. “I felt like I had a chance and a pretty cushioned lead to get it done.”