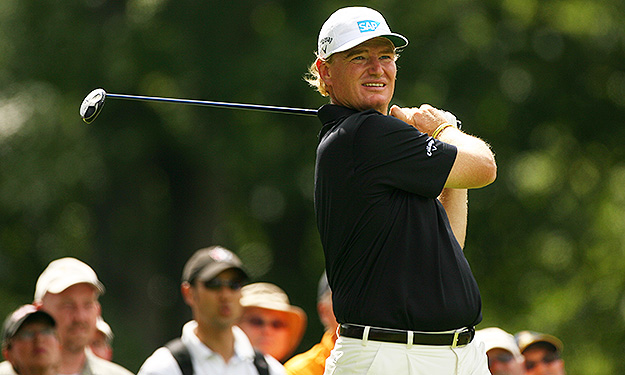 Despite Hamilton Golf & Country Club being set up for low scores — major thunderstorms softened up the course the night before — Ernie Els just couldn’t find his rhythm on Thursday in the first round of the RBC Canadian Open.

While Scott Piercy shot a course-record 62, Els struggled to find the steady swing that helped him win the Claret Jug last weekend.

“It’s a scoring golf course if you get it in play, which I didn’t do enough of today,” Els said after carding a 2-over round of 72.

Despite the score, Els was all smiles. Playing alongside friends Vijay Singh and Matt Kuchar, he exchanged many laughs and plenty of casual conversation with his playing partners.

The problem was his shots found the rough too often, which cost him a few strokes, especially on the 481-yard 11th, where he made a triple-bogey; his caddie Dan Quinn called it “a little meltdown.”

Els was scratching his head and shaking it a lot on Thursday afternoon. After several missed putts that came up just short, he shared this frustration with Quinn.

On Wednesday, the pair admitted they knew little about the Hamilton layout. It looked that way for most of the day, as they were feeling their way around, relying too much on the yardage books, rather than on experience. Many shots were left behind the hole, which are difficult on the severely-sloped greens.

“As much as we thought we could do it, this golf course is tough to play blind,” Quinn said. “I think Ernie can shoot a good score now that he has seen the course once though.”

Els also looked tired as he walked the fairways alongside Quinn. One wondered if jet lag was a factor, but the South African said fatigue was not an issue. He shot even-par 35 going out; and, while it looked like he might finish eagle-birdie-birdie to get close to even par for the day, a chip, and a couple putts came up just short.

On 17, his second shot hit the spectators’ box and dropped down pin-high in the rough. Els then flopped a beautiful chip from two-inch rough that just missed falling for eagle, despite a little dance he did trying to coax the ball in. Instead, a tap-in birdie was the result.

Then, on the final hole, after a long drive down the right-hand side of the fairway, Els hit his approach to 10 feet. Walking up to the green, the British Open champion received loud roars and shouts of “Canada loves you Ernie!” Ever gracious, he doffed his cap, and waved to the crowd.

After Els signed his card, The Big Easy stopped to sign hats and flags en route to the range where he hit a few balls, trying to find that sweet, easy-flowing swing again.

“It’s not that I didn’t have some great chances,” Els said. “I was just a bit sluggish today … trying to find that rhythm to my swing that I had last Sunday at the British Open. But, it wasn’t quite there today.”