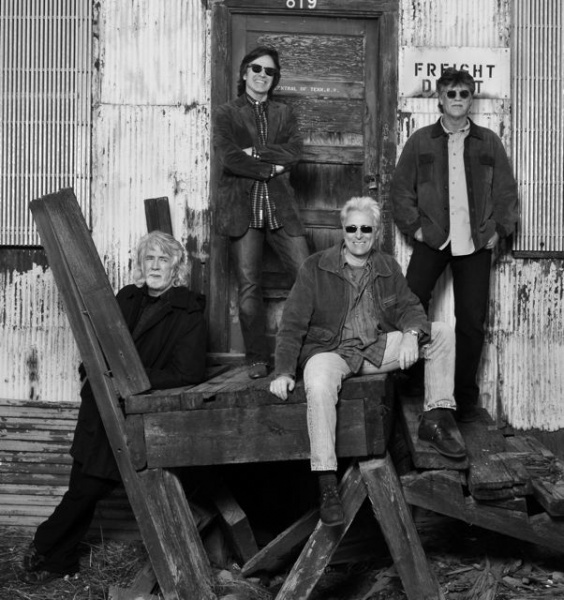 When we chat on an early September morning, Jeff Hanna is keeping cool at his home in Nashville, Tennessee, before he hits the road again with the Nitty Gritty Dirt Band. First, they’re heading to Shreveport, Louisiana, and then they’ll add more miles to the odometer, bouncing around North America for the rest of the year.

The latest tour sees the group celebrating the release of Nitty Gritty Dirt Band and Friends – Circlin’ Back: Celebrating 50 Years. The concert album, recorded live at Nashville’s venerable Ryman Auditorium, features Hanna and the other original members: Jimmie Fadden (drums/harmonica/vocals), Bob Carpenter (keyboards/accordion/vocals), and John McEuen (banjo/fiddle/guitar/mandolin). The recording drops September 30, as an individual record or as a CD/DVD combo, on the band’s own NGDB Records.

The Ryman was an obvious host for this nostalgic celebration. “It’s where a lot of the music we loved lived, and still lives today,” says Hanna. “It was a natural choice on several levels. As a Nashvillean, there is nowhere I would rather go to hear or play music.”

One wonders, a half-century on, if climbing those steps — and settling aboard a tour bus — ever gets old. Not really, says the 69-year-old Hanna. “There is something comforting about a tour bus. You have all your stuff on there and you are travelling with your pals.”

As trailblazers in the Americana, country-rock, and roots music traditions, the Nitty Gritty Dirt Band decided there was no better way to mark 50 years together then to make a record and document a special evening, inviting a bunch of their musical compadres and those who’ve played some part in their storied success to the party. As a retsult, Sam Bush, who guests on the classic tune from the American songbook “Nine Pound Hammer,” called the beefed-up version of the band, who appear on this recording, the Nitty Gritty E-Street Band.

“This was just a gathering of our pals to celebrate this milestone,” Hanna explains. “Everyone involved in the show has had a significant impact on our career, and all the songs we chose to play and record are touchstones for us.”

The 18 cuts on this new record are all musical threads of the rich tapestry that comprise the Nitty Gritty Dirt Band’s catalogue. Many of these tunes also appeared on one of the trio of classic Circle records such as the Grammy-winning Will the Circle Be Unbroken, released in 1972.

Similar to how that album featured a number of their musical friends and heroes, even more of the group’s heroes accompany them this time around. John Prine was on hand to sing and play on a pair of his songs: the classic folk tune “Grandpa Was a Carpenter” and a spirited take on “Paradise.” NGDB chose the latter because it’s one of their all-time favorites. “We’ve been singing that song in soundcheck for 30 years,” Hanna says.

Another song long in the band’s repertoire, that makes an appearance on Circlin’ Back, is Texan troubadour Jerry Jeff Walker’s melancholic tale of “Mr. Bojangles,” one of NGDB’s bigger hits, which rose to Number 9 on the Billboard Hot 100 pop charts back in 1971. “We hadn’t played with him in 25 or 30 years, so it was great to reunite,” Hanna adds.

Rock and Roll Hall of Famer Jackson Browne is another artist who Hanna and his bandmates reunited with for the new retrospective record. Browne sang with NGDB in the early years, when they were still a jug band, but he had never recorded with them before now.

“We did one of the old jug band tunes with him — ‘Truthful Parson Brown,’ along with ‘These Days,’ [which was] a song he wrote during his time singing and playing with us in the 1960s.”

“Truthful Parson Brown” is a traditional tune from the 1920s that Browne’s father taught him. On this recording, the song sounds as relevant and fresh as when it was written nearly a century ago.

Jimmy Ibbotson, a member of band for 30 years, who left the group a decade ago, returned to play a couple of tunes with his old friends. Among them were Cajun numbers like: “Fishin’ in the Dark,” songs that were integral parts of the band’s set for years. Other guests on Circlin’ Back include Vince Gill, Byron House, Allison Krauss, Jerry Douglas, and Rodney Crowell.

Fifty years since they first gathered together to play music, these four horseman still sound oh-so-good. Their harmonies ring and instrumentations sing.

When I ask Hanna if he ever imagined the band would stick together for this long, he laughs. “No way,” he says. “The majority of us were teenagers when we started. We thought, ‘This is a band that will be fun for a couple of years.’ The band then went through a few direction changes musically. We started as a jug band, then a few years into it, about the time when the country-rock revolution was happening in California with Poco and the Flying Burrito Brothers, we saw that as a natural evolution for our sound. We were always also fans of Buck Owens and the Everly Brothers … those artists all influenced us in 1969 when we changed direction.

“Until then, we had done four records of mostly jug band music,” he adds. “That was the first time we felt we could do this for a living, but we would have laughed you out of the room if you had said we would be together for 20 years — let alone 40 or 50. Lo and behold, we are all — knock on wood — healthy, and we’ve made it to this milestone. We get along like most families. We are a little dysfunctional, at times we fight, but we are grateful we get to still play together and hang out.”

Hanna says one thing that’s helped the band stay together for 50 years is that they all have musical side projects outside the Nitty Gritty Dirt Band. Everyone does sessions with other musicians and Jimmie Fadden has a trio (Suitcase Full of Blues) based in Florida with whom he plays regularly. For his part, Hanna does a lot of singer-songwriter guest spots on other people’s records; he also performs as an acoustic duo with his wife from time to time, which he says is fun and different from his “day job.”

No matter what job he’s doing day to day, despite a drifter’s existence for the first half of his life, Hanna is happy to have called Nashville home for the past three decades.

“I moved to Tennessee in 1985,” he recalls. “We made our first Circle record here in the summer of 1971. Then, in the early 1980s, we came back to Nashville and started to make a record aimed at the country market. I’m proud of those records we made in Nashville in the 1980s, even though we eventually returned to our acoustic-based sound.”

On the road, as the band celebrates its first 50 years, there’s no reason why they can’t keep the music going for at least another decade.

“People have been happy to light the birthday candles with us,” Hanna notes. “It’s been a real celebratory year. We are very grateful to have a fan base that has shown up and bought our records for so many years. It’s not lost on us how lucky we are.”

Jack Ingram’s Seven-Year Journey Is Worth the Wait