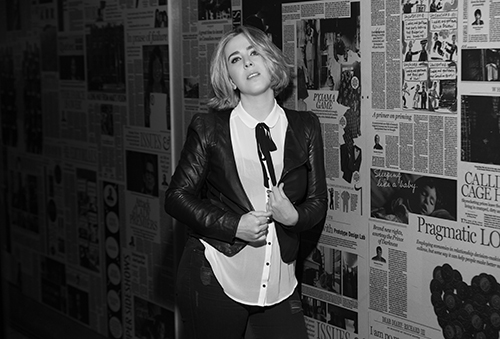 After four rigorous years on the road that included a broken heart, singer-songwriter and pop star Serena Ryder was burnt out, physically and mentally. So in 2014, she moved to Los Angeles, with no plans other than to take a break from music. The then-31-year-old, who has openly and publically battled depression before, checked out for a while – taking time to rest, rejuvenate, and just hang out at the beach.

“I was going through a break-up and winter was coming,” says Ryder. “I just wanted to feel warmth and sunshine on my face, and in my heart.”

The ocean had always called her name, so L.A. was the perfect place for Ryder to seek refuge. It took almost a year just to “get my shit together,” she says. Only after Ryder started feeling like she was back to her old self did the desire to write return. As she combined the inspiration of living on the West Coast with a host of new co-writers, it wasn’t long before song sketches started to fill in the blank canvas for the follow-up to the JUNO Award-winning Harmony (2012). Utopia is set for release in November 2016, and while its final track list isn’t yet set at press time, Ryder has recorded more than 50 songs.

Sir Thomas More coined the word “Utopia” for his 1516 book of the same name; it describes a fictional island society in the Atlantic Ocean, and has come to mean an imagined place or state of things in which everything is perfect. For Ryder, Utopia means something different. “The title came from the First Nations story of The Two Wolves,” she says. “It’s an old parable of the battle that’s going on inside every human. Two wolves, a dark wolf and a light wolf, represent this battle. An elder tells this story to their grand-daughter, who asks: ‘If there’s a battle going on between the dark and the light wolf, which wolf wins?’ The elder replies: ‘The one you feed.’

Ryder credits her long-time management, Pandyamonium, and her record company, Universal, for allowing the six-time JUNO Award winner and two-time SOCAN Award honouree to achieve this balance; neither of them pressured the musician to deliver a new batch of songs within a set period of time. Not having a schedule worked to her artistic advantage; it allowed the songs on Utopia to come together organically, in their own time.

“I was blessed to have that,” she says, “because a lot of artists finish one record and they feel this pressure to put out another one right away. It’s like you have a baby, and it’s two years old, and you’re told, ‘Now go have another baby!’ I’ve been lucky I’ve been able to do some living in between. There’s definitely more of a variety, storyline, breadth and depth of emotion in the songs because I had that time.”

Did Ryder’s break-up play a role in this new batch of songs?

“Everything I experience in my life plays into my music,” she says. “I didn’t consciously write about my break-up. I was writing about my relationship with myself… That’s the one that ends up affecting all the other relationships you have.”

“Got Your Number,” the first single from Utopia, is an infectious, upbeat song that originated during one of those L.A. afternoons. Ryder was just chilling, hanging at her place with a couple of friends. She set up a drum kit in the living room and started to groove. “I always strive to write a song that makes people want to move and feel the beat,” she says. “I was playing on the drum kit, looking for the right vibe. I had this New Orleans scene in my head of people street dancing, and playing drums and horns, and I just started rapping.”

While Ryder usually starts writing songs with a melody in mind, on this occasion it was the drumbeat that fuelled her muse. “I just started spewing out lyrics,” she says. “It all happened organically. My two friends, [songwriters] Derek [Furnham] and Todd [Clark] were there, just writing stuff down as I said it. I like being the monkey in the middle: throwing the lyrics and the melody out for them to record. It was a really inspiring writing session; I believe that energy transferred onto the song.”

Utopia was also about finding new songwriting partners, including fellow SOCAN member and multiple award-winning professional songwriter Simon Wilcox, who’s become one of Ryder’s “best friends on the entire planet.” The pair, first introduced by Ryder’s keyboard player Hill Kourkoutis, write a lot together, but mostly they just hang out and do yoga. More than half the songs on the new disc are co-writes with Wilcox and another highly celebrated pro songwriter and SOCAN member, Tawgs Salter.

“I love that other people mirror stuff back at you,” says Ryder. “People end up working better when they work together. That’s just my experience. Some people work really well alone. Maybe my next record I’ll write by myself. I have no idea why, but for this record, community was really important.

“I like working with people who are opposites of me,” she says. “Tawgs knows music theory and how to use a computer and track songs, so that’s what happened on this record. I wrote most of the lyrics and the melodies and then I had a producer or writer do the tracking and add in the musical theory.”

While 50 per cent of the songs on Utopia were written during Ryder’s sojourn in L.A., the rest of them were written in various locales around the globe, including Nashville; London, England; Australia; and Toronto. One new songwriting partner Ryder discovered in the U.K. was John Grant. “I wrote ‘Killing Time’ with him,” she says. “I fell in love with working with John, and I flew him to Toronto a couple of weeks later and we wrote another song called ‘Back to Me.’” Another was Colin MacDonald of The Trews, who ended up becoming her fiancé.

No matter where she writes, one wonders if Ryder follows a set songwriting formula. We ask whether, like recent U.S. Songwriting Hall of Fame inductee Chip Taylor, she gets chills when she knows a song is a keeper.

“It all depends,” she says. “Songwriting is so ethereal to me. I write on real intuition and feeling. When Chip talks about those chills, sometimes that happens to me… sometimes I get melodies in my head, and sometimes someone will say something that sparks a whole other idea.”

Ryder compares that moment before an idea arrives to an artist staring at a blank canvas. “When you have a blank canvas, you have an open invitation to take a color you like and put it on there,” she says. “For me, I play around with melody like it’s one of my favourite colors… I think about how this note tastes on my tongue, what word makes that sound happen and then I’ll write down that word and ask what it means to me… In that moment I’m just like a pre-school kid sitting and playing with their favourite colours.”

Nitty Gritty Dirt Band Circles Back to Its Roots

No time like now for Steve Strongman
Scroll to top