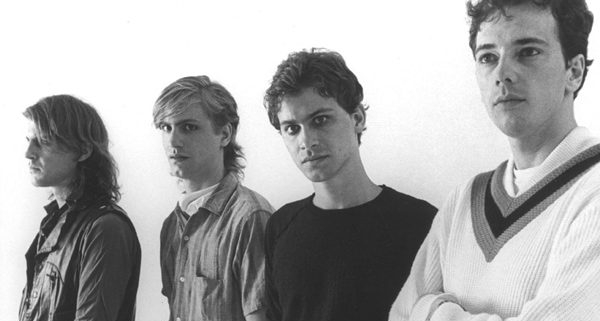 “I got the message and the message is proof / There really is a thing they call the rhythm of youth / It will pick you up and it will make you wiggle this way / Et c’est facile a dire and it’s easy to say.”

– Rhythm of Youth, “I Got the Message”

Created in the fertile milieu of Montreal, Quebec in the early 1980s, the band took its name from the fact that founder Ivan Doroschuk and his two brothers (Colin and Stefan) never wore hats during cold Montreal winters. Their musical inspiration derived from the disco craze and punk movement of the late 1970s. Call it a new wave, or simply a new dance craze. No matter the moniker, these songs make you want to move.

Yet beyond the simple melodies, the synth sounds, the lead baritone, and the bouncy infectious beats, lay deeper messages. Just listen to the words in songs such as the hit single “The Safety Dance,” “Ban the Game,” and “Living in China” that speak to socio-political issues from censorship and global warming to communism and wars on foreign shores. Forty years on, these songs stand as strong as the moment Doroschuk penned them during an intense two-week watershed songwriting session.

For the latest Record Rewind, Amplify caught up with the founder and lead singer of Men Without Hats to look back on the making of this seminal record and look ahead to what Doroschuk and the band are up to now.

THE ROAD TO RHYTHM OF YOUTH: A BREEDING GROUND FOR NEW SOUNDS

Men Without Hats was formed in Montreal in the late 1970s. The original lineup featured Doroschuk along with his siblings Colin and Stefan. They later added percussionist Allan McCarthy. Montreal, circa 1978, was a breeding ground for all sorts of music. There were no boundaries. The influx of musicians from across Canada created a melting pot of styles and genres.

Though the English music scene was small, it was eclectic. If you strolled along the sidewalks of Sainte-Catherine Street or St. Laurent Boulevard on a Saturday night, you would hear a mishmash of sounds bursting from the clubs and speakeasies. Unlike Toronto, where the so-called ‘music-industry’ lived, Montreal was bereft of corporate decision-makers and their influence. This created true artistic freedom.

“Montreal bands knew that there wasn’t going to be a record executive with a big cigar and a wad of cash at the back of the room ready to sign them to a big deal, so they were free to do what they wanted,” explains Doroschuk from his Vancouver home. “They didn’t have to conform to be the next Parachute Club or The Spoons—big 1980s Toronto bands—this left us a lot more freedom to experiment.

“Montreal was a unique place to come from musically,” he adds. “It was championing bands like Pink Floyd and Genesis way before the rest of the continent. When those bands came to Montreal in the early 1970s, they played the Montreal Forum, then, they would go to New York and play the Bottom Line for 300 people.”

When it came to progressive music, Montreal was ahead of its time.

“I’ve always referred to Montreal as the Little Apple,” Doroschuk says. “The city had a huge disco scene in the 1970s that was connected to the New York scene. We would go down to Dutchy’s Record Cave on Crescent Street every Friday afternoon and get the latest singles shipped up from New York City. Then, punk broke, and we just combined the two.”

Doroschuk and his band of brothers defined new wave as a mixture of disco and 1970s prog-rock by bands like Genesis, Pink Floyd, Yes, and King Crimson.

“I had grown up taking piano lessons my whole life,” he recalls. “I was ready … I had all the tools and all the chops.”

“WE CAN DANCE IF WE WANT TO”

“The Safety Dance,” with its freedom of expression message: “We can dance if we want to,” was the second single off Rhythm of Youth that skyrocketed Men Without Hats to international stardom. The song earned a Juno nomination in 1984 for single of the year; that same year they also earned a Grammy nomination for best new artist. Doroschuk wrote this protest song after getting kicked out one too many times from clubs for a dance deemed too dangerous.

“The legend behind the song’s origin is true,” he says. “I was getting kicked out of these clubs in the dying days of disco. DJs, during the course of the night, would slip in some Devo, a B52s song like ‘Rock Lobster,’ or Blondie’s ‘Heart of Glass.’ As soon as those songs began, my friends and I would hit the floor and start to pogo dance. Nobody had seen that before; the bouncers thought we were fighting. Pogoing was the pre-cursor to the mosh pit.”

The early 1980s was the heyday of music videos. Men Without Hats’ record label pushed the band to make a video to accompany this catchy single.

“It was a new thing at the time and everybody was making them,” Doroschuk recalls. “The magic was that Tim Pope, who directed the video and did videos for other new wave bands like Soft Cell, Talk Talk, and the Cure, and I had the same vision. We exchanged ideas and wrote letters across the pond and both of us had this Pied Piper idea… it was almost like Tim was a member of my family. I flew over to England and appeared in the video; it was a magical experience and helped propel the single up the charts.”

The song peaked at No. 3 on the U.S. Billboard charts and stayed on the Hot 100 for 24 weeks. A remixed version hit No. 1 on the Billboard Dance Chart. In the U.K., “The Safety Dance” peaked at No. 2. In 2020, the song—along with the band’s “Pop Goes the World”—was inducted into the Canadian Songwriter’s Hall of Fame.

Reflecting on this song’s success, did Doroschuk imagine such incredible response for this protest composition that became an anthem for generations?

“When you are a budding songwriter, at least I speak for myself, I thought everything I wrote was a hit,” he comments. “If I wrote 10 songs, I felt there could possibly be 10 No. 1 singles there, we just needed to work it properly. ‘The Safety Dance’ wasn’t even our first single released in Canada; it was ‘I Got the Message.’ We had a song on the radio and were super stoked and planned to go into the studio and make a second record. Then ‘The Safety Dance’ dance mix hit No. 1 on the Billboard dance charts and that changed everything. We were yanked out of the studio, put on a bus and sent on tour for the next two years to promote Rhythm of Youth.

“We have now been assimilated into pop culture to such a degree that that song is way bigger than me… way bigger than the band,” Doroschuk adds. “I feel like a museum curator travelling around the globe and presenting this musical artifact to people that procures immense joy. That is one of the reasons our fans are still listening to our music and enabling us to play live.”

Forty years since the release of Rhythm of Youth, with many stops, starts, and lineup changes over the ensuing decades, Men Without Hats is back in 2022 with its first record of original material in 10 years, Men Without Hats Part 2, recorded on Vancouver Island during the pandemic and released earlier this month. The band is climbing back on the bus and excited to perform live with an extended tour, starting in May in the U.K. and featuring two distinct sets: Rhythm of Youth in its entirety, followed by fan favourites and new songs in the show’s second half. Colin is back in the band, along with his daughter Sahara.