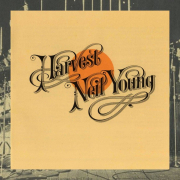 “There’s baseball on the radio, and I’m playing Harvest by Neil Young;
Mom says singing songs like that you could save everyone.”

These lyrics, cited from one of my favourite Joe Crookston compositions, speak to the undying love artists have—not just for Neil Young, but for Harvest. Long before the Internet, generations of aspiring musicians sat in their bedrooms with acoustic guitars listening to Harvest and learning the songs, chord by chord, verse by verse, dropping the needle, picking it up, and then repeating until the grooves in the vinyl were worn.

Julian Taylor is one example. As a kid, he learned piano to appease his parents, but it was not his instrument of choice.

“When my older cousin lent me her classical acoustic guitar I was thrilled,” recalls the JUNO-nominated musician. “She showed me a few chords and I was left to my own devices. Harvest was one of the albums that helped me learn how to play. It’s sound and simplicity drew me in and I listened to it daily. I’m grateful to the album because it’s helped me define part of my sound. Even though my styles vary, I’m a vampire folkie at heart.”

Harvest was Young’s fourth record, following the self-titled Neil Young (1969), Everybody Knows This is Nowhere (1969), and After the Gold Rush (1970). Young wrote many of the songs that appeared on Harvest and workshopped them during a solo North American tour in 1971. A back-injury had forced him to mellow his mind with painkillers and reach for the acoustic more frequently. The resulting record released February 1, 1972 was the highest-selling album in the United States that year and featured a pair of singles that made the Billboard Top 100 charts: “Old Man,” which peaked at No. 31, and “Heart of Gold,” Young’s only single to reach No. 1.

Critics were lukewarm. Writing in Rolling Stone, John Mendelsohn called the album “a disappointing retread of earlier, superior efforts by Young.” In a recent interview with David Fricke on SiriusXM, Young stated, in typical Neil Young fashion, “Harvest is just another record.”

But who cares what the critics think, let alone Young. Harvest is a 10-song masterpiece; a touchstone for singer-songwriters. The album opener “Out on the Weekend” moves from the opening two-note bass line and whispered drumbeat to the minor chords that follow. Soon after, a loner’s imperfect voice singing words from the deepest recesses of his mind hypnotizes you. Existential. Abstract. Simple.

Since its release a half century ago, the record has influenced and inspired a myriad of artists. No matter where they were when they first heard Harvest—in Toronto where Young was born, in Winnipeg where he spent his formative years, in Vancouver on the West Coast, or in a remote northern community like Attawapiskat—the album attracted them in equal measure. GRAMMY-winner Colin Linden, who bought the LP upon its release, captures the spirit of the record in a single word: “kindness.”

In researching this piece, I listened deep to these expressions in song. I heard the kindness and the sadness. My father’s well-weathered vinyl copy guided my journey. Harvest’s pull first grabbed me during my teenage years. Re-listening to the record today, it still hits with the same feelings. The record is a portrait of an artist as a young man struggling with fame and asking existential questions. As Young was deeply in love with actress Carrie Snodgrass—the mother to his son Zeke—bliss permeates many of the songs.

The making of Harvest begins with happenstance. Young was in Nashville to tape an episode of The Johnny Cash Show. Out on the town, Young ran into Elliot Mazer. The audio engineer invited him to record some songs at his two-storey Victorian home studio, Quadrafonic Sound. On short notice, Mazer recruited a trio of session musicians to back up the singer-songwriter: pedal steel guitarist Ben Keith, bassist Tim Drummond, and drummer Kenny Buttrey. James Taylor and Linda Ronstadt, who were also in town for The Johnny Cash Show, joined the band for a couple of songs. Young and these killer players clicked. He later dubbed them The Stray Gators.

The result of these spontaneous sessions at Quadrafonic were four cuts for the record: “Harvest,” “Out on the Weekend,” “Heart of Gold,” and “Old Man.” Later, The Stray Gators, convened at Young’s Broken Arrow Ranch. Producer Jack Nitzsche used a remote recording system, set up PAs in Young’s barn, and converted this space into a makeshift home studio. Three more songs are captured: “Alabama,” “Are You Ready for the Country?” and “Words (Between the Lines of Age).” Young’s pals David Crosby and Stephen Stills add backing vocals to these heavier—both sonically and lyrically—tracks. The final pieces, “There’s a World” and “A Man Needs a Maid,” were recorded in London at Barking Town Hall with the London Symphony Orchestra using the Rolling Stones Mobile Studio, which now resides at Studio Bell in Calgary. Nitzsche arranged the pieces and Glyn Johns (Led Zeppelin, The Who, The Eagles) produced. The final piece of this seemingly disparate puzzle, “The Needle and the Damage Done,” was taken from a live performance at UCLA in 1971.

The early 1970s in popular music is often described as the singer-songwriter era. Following the psychedelic 1960s, where loud guitars ruled, artists like Bob Dylan, Paul Simon, J. J. Cale, James Taylor, and Joni Mitchell made it OK to reveal your innermost feelings in song. Young led this charge, but he also deviated from it—telling his contemporaries and future followers that it’s OK to not restrict yourself to one genre. From the country-tinged Americana of songs like “Out on the Weekend” and “Harvest,” to the grittier electric sounds of Young’s Gretsch White Falcon speaking to you in otherworldly tones on “Words” and “Alabama,” to the beautifully-arranged and lush “A Man Needs a Maid” and “There’s a World,” Harvest offers a bounty of styles.

For Luke Doucet (Whitehorse), who grew up in Winnipeg hearing Harvest regularly in his household, this is what makes the record so vital.

“I’m not a music historian, but to me Harvest feels like the archetypal post-genre record,” he explains. “It’s such an incredibly diverse record that defies genre. So many bands have benefitted from the precedent Harvest set. Think of Wilco. Without a record like Harvest, they might never have been able to land on such diversity in their output. Young paved the way to jettison the conservative restrictive notions of genre.”

In the liner notes to Decade, the early career retrospective album Young released in 1977, the songwriter wrote: ”’Heart of Gold’ put me in the middle of the road. Travelling there soon became a bore so I headed for the ditch.” While Young might have tired of the success his only No. 1 single brought, artists cannot choose which of their creations the people will embrace. Despite his ennui for the song, “Heart of Gold” connected with generations of artists.

Just ask Adrian Sutherland, a songwriter from Attawapiskat First Nation, a fly-in Cree community on the coast of James Bay. Flashback to 1992: 16-year-old Sutherland borrows a harmonica from an Elder, and after fashioning a homemade harness using a coat hanger, two sticks, and elastic bands, he teaches himself to play “Heart of Gold.”

“Neil Young was one of my biggest musical inspirations and ‘Heart of Gold’ is one of my favourite songs,” says Sutherland.

Flash-forward to 2018: Sutherland and his band Midnight Shine release a unique cover of the Young classic and receive rave reviews. In his version, the artist pays homage to his Indigenous culture with powwow singing and a verse in Mushkegowuk Cree.

“We wanted to cover it, but in a way that’s different from everyone else,” the songwriter adds. “So we gave it a little ‘shine’ of our own.”

Suzie Ungerleider, who formerly wrote and performed under the name Oh Susanna, admits the first time she heard Young’s most successful single during her formative years in Vancouver she was nonplussed.

“When I was a kid I heard ‘Heart of Gold’ on FM radio almost every morning and it drove me crazy,” Ungerleider recalls. “I hated it but was also kind of obsessed with it. I couldn’t really stand his voice. But then years later my friend was living in the Czech Republic and on a visit there we listened to ‘Powderfinger.’ My friend said, ‘It’s so intense! Listen to the lyrics: ‘Raised my rifle to my eye!’ And, he mimed raising a rifle to his eye. My friend then looked at me and said, ‘It’s so powerful!’ After that, I started to understand the fascination and the attraction/repulsion I was feeling.”

“I started listening to Harvest Moon on cassette and fell in love,” Ungerleider continues. “And then I went back to Harvest, the source. And, I fell in love again: the imagery, the symphonic arrangements, the country influences, the stories, the mystery, etc. I remember listening to Harvest on cassette in the car taking two ferries to Powell River to play a festival. I was a young and hungry songwriter and the music finally clicked.”

Jim Cuddy was 16 years old when Harvest was released and a self-described “closet guitarist.” The record resonated, leaving a lasting impact.

“Harvest opened a door and I went through it,” he says. “All of a sudden that whole record became songs you could learn and moved me in the musical direction that I followed religiously for the rest of my life.”

For Cuddy, it was not just Young’s acoustic playing that inspired and influenced him, it was the subtleties of the record and its production. “I just loved the overall sound of that record from the flatness of the drums to the ‘thumpiness’ of the bass,” he explains. “Many times in my recording career, I’ve tried to get that organic rhythm sound…just let the acoustic guitars ring and the rhythm section stay contained.”

Colin Linden grew up in Toronto, Ontario, but now resides in Nashville where the album’s most iconic songs were recorded. He agrees with Cuddy. Harvest also opened a door to a new sonic world for him. The record’s depth, created by the sound of The Stray Gators, combined with Nitzsche’s beautiful arrangements, are just a couple elements that struck Linden from his first listen.

“Kenney Buttery is like the heartbeat of it and Ben Keith is like the blood—what flows in and out of it,” he says.

What also makes the record unique is that it was recorded in different spaces and places, yet it still feels cohesive.

“Harvest features four disparate ideas that are brought together in an incredibly focused and unlikely way,” Linden adds. “It reminds me a little bit of the Duke Ellington record Black, Brown, and Beige, which had three different longer pieces to it… different palettes of sound and writing, but somehow it worked together conceptually. In retrospect, listening to Harvest, I feel it has a similar cohesion.”