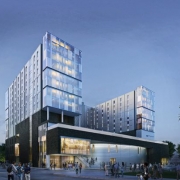 DAVID MCPHERSON
SPECIAL TO THE GLOBE AND MAIL
PUBLISHED SEPTEMBER 3, 2019

On a recent morning in late August, suitcases spilled from minivans as a steady stream of first-year McMaster University students arrived on campus. Some were apprehensive of what lay ahead, while others couldn’t wait for their parents to leave. No matter their state of mind on that exciting first day, their transition from high school to post-secondary life is destined to be memorable and enjoyable in their brand-new home away from home for the coming year.

These lucky learners were the inaugural occupants of the recently opened Peter George Centre for Living and Learning (PGCLL) – the first new residence to be built on the campus in 15 years.

Peter George was an esteemed and personable economist and professor who, prior to his retirement and death in 2017, served as McMaster’s president and vice-chancellor for 15 years. The residence that honours him is located on the north end of the campus, on a site chosen to encompass as much green space as possible – and the couple of Quonset huts, utility buildings and tennis courts that came down to make room for it are not much missed.

With 350 rooms, 518 beds and seven floors of housing, PGCLL helps McMaster narrow the current shortage of campus residence space. With its completion, the University does not have enough residence beds to meet student demand. Several other residence projects are in the planning stages to further narrow the gap.

But this $110-million, 11-storey building is more than just a space for students to rest their heads. PGCLL is also a community hub – a 335,000-square-foot hybrid high-rise that brings together a diverse collection of university functions under one roof.

In addition to three auditorium-size classrooms ranging in capacity from 410 to 640 and a Student Wellness Centre, it’s also the new home of the McMaster Childcare Centre – a modern, state-of-the-art daycare facility with large windows and an outdoor play area carpeted with artificial grass. Situated on a secure second floor that is separated from the rest of the academic and residential sections of the building, parents and kids ride up in a dedicated elevator to gain access to the Centre.

“Peter [George] was a champion for all aspects of student life,” says Sean Van Koughnett, associate vice-president of students and learning and dean of students. “This building is a fitting tribute and symbol to his time at McMaster.” Further contributing to that lasting legacy are inspiring quotes attributed to the educator and student advocate that are displayed in every elevator lobby on the seven residence floors.

As available space on campuses decreases – and student enrolments rise – colleges and universities across Canada are looking for creative and innovative ways to meet these growing demands for capacity and enhance the student experience. The process of planning for how to accommodate McMaster’s future space needs, for about 31,000 students, began six years ago.

“We knew we had a growing student population, and we also understood that the types of teaching [and] learning spaces we needed to provide were evolving,” Mr. Van Koughnett says. “We understood the value that living in residence brings to students, while there was an increasing need for services such as health and wellness, which previously was crammed into the basement of the student centre.”

After many brainstorming sessions, the idea of a building that could accommodate all of these needs in one place began to take shape. From initial discussions to completion was a five-year process wherein “the whole would become greater than the sum of its parts,” Mr. Van Koughnett says.

Toronto-based Diamond Schmitt Architects – who are responsible for the Ontario Science Centre, the Weston Family Innovation Centre and the Four Seasons Centre for the Performing Arts – took up the challenge of designing the facility.

Using all of their available resources and creativity, Diamond Schmitt designed a space where the various uses of the new learning centre and campus residence would work together seamlessly. The result was a new building, now the largest on the Hamilton campus, unlike any the university has ever seen.

Within the learning resource there are academic spaces where three large rooms are stacked on top of the other. The lower two house the auditoria, which with their raked floors and seating capacities of 650 and 500 give the university much-needed space to hold large exams and host supersized first-year classes. The upper room is an active learning area, which can seat 400 at 45 large round tables and is lined with large TV monitors that allow for interactive discussions. All of the walls are finished with whiteboard material to facilitate writing and sketches.

Gone are the days where students sat rigidly at their desks and listened to a professor lecture for an hour while they frantically took notes. Many university instructors now take a more free-flow approach to teaching, walking around and engaging in active discussions, breaking the classes up into working pods and using the latest technology to share information between the students’ laptops and giant monitors on the walls. Even the furniture was designed so that students can turn around and face their peers for group discussions to further facilitate this new learning style.

“Our biggest challenge was to make sure each of the spaces were defined and secure,” explains project architect Antra Roze. “All traffic into the building comes and goes through the main space where a helical (curved) staircase is the central visual, in the middle of the atria, that guides people up, giving them views and cues as to where to go next and encourages people to stop and look out over the spaces.”

MULTITASKING FACILITIES MAKE THE SMARTEST POSSIBLE USE OF SPACE

Another McMaster department that stands to benefit from the PGCLL – both practically and economically – is the conference and events team. With three lecture halls of different sizes, study and breakout spaces, plus food services and 350 rooms, the new facility is ideal for hosting conferences and special events during the summer months when most of the students have left.

“It’s a smart use of resources to have activity in our buildings 12 months of the year, rather than sitting dormant for four months in the summer,” Mr. Van Koughnett says.

PGCLL BENEFITS SURROUNDING CITY OF HAMILTON AS WELL AS STUDENTS

From the lounges on each of the residence’s seven floors, expansive windows offer unobstructed views of Cootes Paradise, a nearby natural sanctuary and wetland surrounded by forest, and McMaster’s athletic fields. At 20,000 square feet (nearly double the space it previously occupied in the basement of the student centre), the new Student Wellness Centre is filled with natural light and reflects well-being. It is staffed by a variety of specialized health professionals to meet the physical, mental and emotional needs of McMaster students.

The Peter George Centre for Living and Learning not only benefits current and future McMaster students, it also aligns with the university’s mission statement by contributing to the greater good of the City of Hamilton.

“McMaster is a huge player within the City of Hamilton,” Mr. Van Koughnett says. “Our mandate is to be economically and socially integrated into the city by generating and attracting business to the region – not only is that good for the city, but it’s good for the university.”