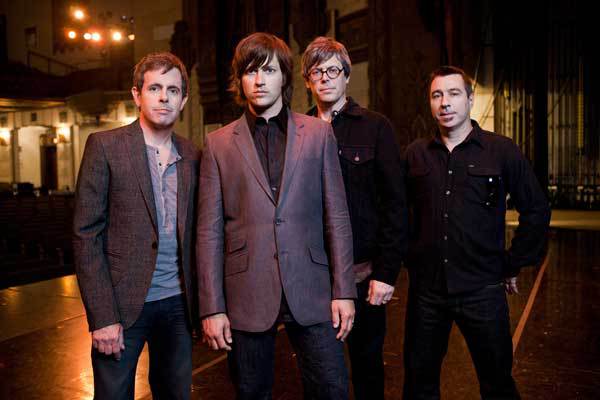 American Songwriter caught up with Murry Hammond, bassist for the Old 97’s, right before Thanksgiving. He was at the post office, and doing some other last minute errands getting ready to host 14 of his in-laws. The band is currently on tour promoting their stellar new album, The Grand Theatre Volume 1, recently released on New West Records. Come spring, the band is set to release a second volume. Hammond talked about how proud he is of the rawness of this record and how its songs hark back to the Old 97’s earliest recordings.

Fifteen years on, The Grand Theatre Volume 1 returns to the band’s roots and early influences in terms of its garage-rock, loose sound. Did you purposely try to rediscover that rawness?

I’ve always thought that the 97’s at our best are the 97’s at their rawest and ‘garage-iest.’ The rawness is always there, but the edges are taken off by the studio experience. Working with producer Salim [Nourallah], he allows that rawness to come through, especially on this record.

We walked into the studio this time with the philosophy that it was going to be all about the spirit over perfection on every single track. That’s how you get great records. Think of your favorite records and that’s what they did. You can’t talk about liking the Kinks, The Beatles or whoever, and then go into the studio and do something that they wouldn’t do, such as getting too precious with your music and ignore the raw, greatness of what you do. We are lucky to be one of those bands. There might be a little bit of sloppiness to it, but there is so much mojo heaped on top of it that it becomes a magical thing. I’m very proud of that, and I’ve always wanted to be in a band like that.

What’s the secret to keeping that mojo alive? Does having side projects help?

I don’t think the side projects play a major role in what keeps things fresh. The four guys have this permanent chemistry. It’s there despite anything, it doesn’t need any help. We are very fortunate that way. We just show up in the same room and it’s there. The thing the little side projects do for the guys who write a lot of songs is that they get to have more than one outlet for their music. But, for that truly magical thing, it happens in the 97’s.

I understand you are pretty proud of this record.

I’m probably as proud of this record as I’ve been since Too Far to Care. I like all of our records, but I like this one about as well or better than anything we’ve done since the early 1990s. It’s just a really good period for us and it reflects that great mood that is in the band. It’s a good indicator of how many red blood cells we’ve got left. I’m really, really proud of my band right now.

You recorded so much material that you’re putting out The Grand Theatre Volume 2 in the spring. Why not put out a double disc now?

We thought it was too much music when we went to listen to it. Maybe we got a little tired of listening to our own record. So, we turned it into a positive. We thought if we add more music to it, we could have two full albums all at once. We took a record that was already a double record length and added an additional six songs that we had not touched the first time around. Did it in the same studio, the same way, and then re-recorded a couple of songs. We had enough material for a double record with outtakes and bonus tracks. We now have this 29-song monster period; we will always look at this period fondly for how prolific it was.

Tell me about the songs you contributed to this record. What’s “You Were Born to be in Battle” about? It has a real Johnny Cash feel.

I’m very pleased with my contributions. It’s not easy to stand alongside a Rhett Miller as a songwriter because I’m not Rhett. It’s all I can do to show up a couple of times on a record and try to match him. Regarding “You Were Born to be in Battle,” I tend to write a lot of songs in that frame of mind. I wrote it talking to my son about life and what’s in store for him … the good and the bad. It became very Johnny Cash-like, because not only does it have a bit of that sound, it also has a bit of the big, old stuff that he would so often write around. That is where my compass points when it comes to songwriting. The stuff I gravitate towards subject wise is not really relationship stuff, it tends to be more about big questions — good and evil, life and death, etc. The more ‘heavy’ stuff without being too grizzly about it.

What about ‘You Smoke Too Much’?

I don’t write a ton of relationship songs, but that was one of them. It’s a song about letting go of something you need to let go of in the romantic world. It was a tough song. Like everything else I do, it’s fairly autobiographical. It’s about something you are clinging onto, like a vice. After a point of you not letting go, it becomes the little raccoon that is holding onto the little shiny disc while the hunters are coming along with a club and they are going to bash your damn head in. You know what to do, but are unable to do it and you are mad about it.

Any of Rhett’s compositions that really stand out?

There is a pair that I really get a kick out of: “Love is What You Are” going into “Please Hold On While the Train is Moving.” I just love that it is about eight psychedelic minutes between those two songs. There is just this sonic, Technicolor thing happening. It is like a lot of the records I love from the Sixties, like The Zombies and The Electric Prunes.

Any comments on working in this new age of delivering music digitally, and the decline of record stores?

Everything has to change and whether you like it or not, with the good comes the sad. For me, the sad is the record store going away. At the same time, as time goes further on, I’m just going to be some old fart that remembers the record store and nobody else is going to give a shit or wonder why I would be sad about that.

It will sound like old-timey stories when I tell them what it was like to go to a store, flip through a bunch of bins and look at the covers and wonder what a band sounds like and get to know the people who work there. Even now, it’s starting to sound old-timey, but it’s really going to be an old fart grandpa story one of these days. Bring it on I guess, I’m sad to see it go, but can’t stop it; there will be record stores in a sense, but they sure won’t look like they used to. Our challenge is to find that human interaction in the new place that it is going to happen; it will happen, but it’s our choice to make it happen.

A Long, Twisted Road for Lori Yates
Scroll to top