BOGOTA, Colombia — Colombians are a friendly people, full of passion for their country and for life; they exhibit a joie de vivre, which, despite hardships, allows them to look on the bright side and keep perspective. Sure, the birthplace of PGA TOUR player Camilo Villegas, 30, has its problems, but that’s only part of the story; it’s also a place rich in coffee, culture, history, and yes, even golf.

Golf in Colombia is gaining ground. Villegas’ success — he’s won three times since joining the PGA TOUR in 2006 — has spawned more interest and growth in the game. Still, the golf scene there is not that well-known outside the country. Yet, famed architects such as Jack Nicklaus, Robert Trent Jones, and Gary Player have all left their designs on Colombia soil. When it comes to golf in this fourth-largest South American country, the only risk is you’ll have so much fun discovering the various campos, you’ll want to linger on the links longer.

Country Club de Bogota, the host of this week’s season-opening Nationwide Tour event — the Pacific Rubiales Colombia Championship presented by Samsung — is just one of 50 courses in this charming country of more than 44 million people. Colombia’s capital of Bogota boasts more than 7.3 million inhabitants alone. It’s a modern, metropolitan city with fine-dining, shopping, world-class theater, museums and vibrant barrios such as the Zona Rosa and Usaquen.

Leave Bogota by car and within 20 minutes you’ll encounter yet another postcard featuring more shades of a green than the paint aisle at your local hardware store. A few other noteworthy courses in Bogota, and its surrounding savannah, include: Los Lagartos, San Andres Golf Club, and La Pradera de Potosi Club.

Golf in Colombia is an extraordinary and unique experience — from sipping a tinto (small black coffee) on the tee to having a caddy carry your bag and give you tips and camaraderie throughout your round. Since Colombia has no true seasons, the temperate climate allows you to play golf year-round. 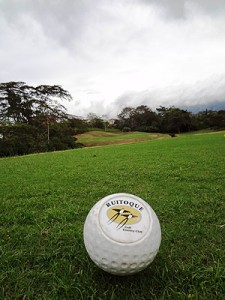 Where else can you play a Nicklaus-designed course (Ruitoque) in the province of Santander near Bucaramanga in the morning, then drive for a couple of hours and board a 6.3 km cable car to cross the Chicamocha Canyon to view spectacular panoramic vistas in the afternoon? Another course in Santander is the Club Campestre de Bucaramanga.

Ruitoque is filled with many classic Nicklaus’ design traits — from large fairway bunkers to strategic pin placements. The most interesting tale about this private course, which opened in 1997, is why it was built. As the story goes, a well-heeled developer, who was a member of the Club Campestre Bucaramanga, showed up late for his tee time for the annual club championship and was refused entry into the tournament. So, to spite his former friends and members, he built an exclusive condominium development — locating it up a winding mountain road.

TINTO ON THE TEE

A tinto in Colombia sparks conversations and is drunk anytime of the day. The black, aromatic liquid is ingrained in the culture. The Coffee Triangle (Triangulo del Cafe), which consists of the departments of Caldas, Quindio and Risaralda, produces some of the best coffee in the world.

Everywhere you turn, it’s a postcard. Imagine sipping a tinto before you tee off, gazing out at green, lush mountainous landscapes and coffee plantations. Above, the towering trees such as the grand eucalyptus look down on you — forcing you to take time to ponder what life means and Mother Nature’s beauty.

Besides its friendly people, Colombia’s charm resides in its landscapes. It has diverse climates — from the tropical Cartagena that borders the Caribbean Sea in the north to the Amazon jungle basin in the far southern reaches of the country. In between, the Andes Mountains define the Colombia’s topography; it’s the only country where this mountain range breaks up into three chains.

Go beyond the one-sided headlines. Discover for yourself Colombia’s enchanting beauty, both on and off the fairways, and you’ll soon subscribe to the tagline of Proexport Colombia, which promotes tourism in the country: “The only risk is wanting to stay.”

Villegas Confident Golf Will Continue to Grow in Colombia

Mahan Withdraws After Wife Goes Into Labor
Scroll to top