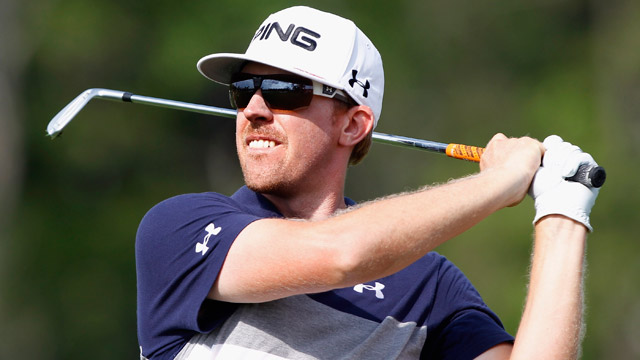 “Kandi and I are thrilled about this addition to the Mahan family and we look forward to returning to the RBC Canadian Open in the coming years.”

Mahan grabbed the lead at Glen Abbey after shooting 67-64 to take a two-shot lead over John Merrick heading into Saturday’s round. With Mahan’s WD, Merrick played alone in the final group.
The final group was delayed 80 minutes due to an earlier storm, so Mahan and Merrick were one of the few groups who had yet to tee off. Golf Channel showed images of Mahan taking a phone call on the range, and moments later, he departed from the premises.

Brandt Snedeker surged into the lead with a 63 on Moving Day, and only learned Mahan had withdrawn when he didn’t see Mahan’s name on the leaderboard while waiting to hit on the seventh tee.

“With him leaving, it left the leaderboard wide open,” Snedeker said. “It changes the complexity of the tournament. The way Hunter was playing, he was going to be hard to catch … anyone can win now.”

Mahan had played his best golf of the year this week in Glen Abbey. He was in good position for his first win of the year after a solid summer that produced top-10s at both the U.S. Open and last week at The Open Championship.

Dustin Johnson, who eagled 18 to shoot 63, played with Mahan in the first two rounds. He said the news was unexpected, but wished his PGA TOUR colleague well.
“I actually didn’t know that [his wife was due] until my caddy Bobby told me on 18,” he said. “Hopefully everything goes all right. I know it’s one of those situations where you probably wouldn’t expect him to have to leave.

“But sometimes that’s just how it works. He’s playing really well right now, but yeah, I mean, things happen, and obviously I’m in a good position for going into tomorrow.”