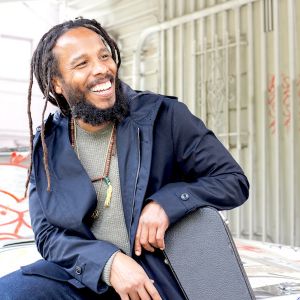 Ziggy Marley was just a young lad when his father Robert Nesta Marley – in most reggae circles known simply as Bob – passed on in 1981. Twenty-five years on, the songwriter is continuing to advance his own music career, while never forgetting his father’s legacy. He feels he knows his dad more now than ever and he communicates with the reggae legend through his dreams. With Bob’s good vibes confirming to him that he’s on the right spiritual path, Marley is taking the inherent message of his new disc Love is My Religion around the world. Released August 29 in Canada, Love is My Religion veers more towards the spiritual side of the human condition; yet, several songs still champion equal rights and justice, and lament the struggles of the oppressed. He talked with Chartattack recently about the power of dreams, his newfound spirituality, and the need to hang on to our freedoms.

Chartattack: On Love is My Religion you embrace spirituality in your writing and stray a bit from the emancipation anthems you wrote early in your career. Why is that?

In my early days I did a lot of social commentary, which is where my father left off, but he was heading into where I am now with songs like “Redemption Song.” Imagine my father’s career coming from “Get Up Stand Up” and “Slave Driver,” songs like those, to the later days where he was becoming more into that spiritual side too … “Redemption Song,” mental slavery, not physical slavery anymore … it’s that evolution that I kind of went through too and evolved.

Now, especially with this record, I find myself writing more songs about spirituality more than physical or social things. For many years I’ve found myself drifting away [from writing social commentary songs] because how much time can I spend singing about the poor, suffering and injustice … I still do it, but I do it less and less. I’m singing more about the spiritual condition of mankind and the spiritual thoughts and concepts like “Love is My Religion” and “Lifetime” where I speak about reincarnation. I’m going deeper right now in my songwriting.

I could go on blaming the system everyday. I could say the system causes so many problems and I could sing about that and about what the system has done to us. But over the years I have looked more within myself and realized that we as human beings need to change something inside of us more than change something outside of us like the system. It is okay to change the system, that is a struggle and that is something we should look on, but you should never ever forget yourself and the inside of you that needs to change also because in a way the system exists inside of ourselves … it is not just governments, politicians and extremists.

Chartattack: The song “Keep on Dreamin’” on your new record talks about how you communicate with your father and connect with him through your dreams. Tell me about that?

I know there is a connection. Many years ago after he passed I began having dreams. The dreams are strong. It’s not a joke. They have meaning. I feel camaraderie with him. That’s how we are in dreams. He supports what I’m doing and he shows me that support in the dreams and he wants me to keep on going and keep evolving. He’s into what I’m doing that’s all I can tell you.

It’s like, for me, the more I grow the more I understand him. I don’t know if it is as an artist or as a man. I think a lot of what I feel and know is what he knew, but people didn’t see. People saw the image of Bob Marley … the militancy of Bob Marley. What I feel now is that there was another side to him that I’m realizing that didn’t come out at the time … the spiritual side and the gentle way of putting things. I feel much closer to him now. I feel like I know him and I know he knows me.

Chartattack: While spirituality is now at the root of your songwriting, the struggle of the oppressed is still present in your songs. This is especially prevalent in the powerful song “Still the Storms” that shows how the wounds of slavery in North America still have not healed. Tell us about this song?

I studied history and slavery in school and I know the triangle of trade. I’m not singing that song from any kind of pulpit. I’m personally upset … it’s a feeling of no justice. I feel like the family of Africans has not been vindicated by that injustice that was done to their humanity. I don’t know if there was even an apology. I don’t feel like the world was sorry. It’s like people want us to forget it. I can’t forget it. It affects us today. No matter how many years go by I still can’t forget and people would want us to forget that it ever happened.

Justice is a thing that until there has been some sort of redemption or coming to terms with that injustice there will always be a force in the universe that is seeking that. The universe has a way of finding justice for itself, so that is what that song is about. I used the hurricanes and storms as an analogy because of the routes that the ships took from the West Coast of Africa up through the Caribbean coming up the south of the United States, New Orleans, Florida, even Jamaica … all those areas that get hit by the hurricanes where slaves were taken. I use that as a way to express my frustration.

Chartattack: “Be Free” is another song that expresses your frustrations at the erosion of our freedoms. Tell us about the message you are trying to get across in this song?

“Be Free” is another song that I think is important because now with the politics of fear playing such a great role in what’s happening in the world we are losing are freedoms little by little. It is happening and people are going to let it happen because of the fear and it’s sad. Just as terrorism is an oppression, that is another oppression. It’s like we are getting double oppressed: one from terrorism and one from the world of government that has taken away our freedoms and our rights. There is going to be a little group of us that are not going to want to let it go and we are going to have to be the new freedom fighters.

I just want to remind people to be free and don’t take it lightly. We don’t have to give up our freedoms. It’s bullshit. It’s just a trick to gain more control of innocent people. Our freedoms are not the freedoms that should be taken away … it’s the freedoms of the people that are killing people.

Ray LaMontagne Saved By a Woman