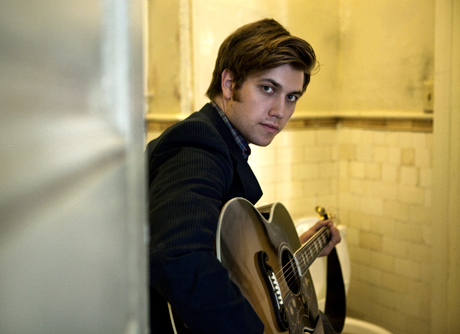 Every day songwriters send their songs out to the world. Usually it’s the voice that grabs you and makes you listen longer. That’s the case with this new voice from across the pond. From the moment Bobby Long’s songs burst from the speakers, you are captivated with the world-weary, blues-soaked tones that this young songwriter possesses. Think the soul of John Lee Hooker mixed with the storytelling knack of Bob Dylan. His poetic songs paint pictures of the universal landscapes we inhabit and the daily sins we commit. Like Henry David Thoreau, Long seeks inspiration from nature and from the ghosts and words on the page of writers’ past. Produced by Grammy-winner Liam Watson (the White Stripes’ Elephant), A Winter’s Tale features an all-star backing band and a live-off-the-floor feel. With a mournful, hypnotic guitar driving this journey, Long lets his words float in the spaces in between the instruments; his simple observations capture large landscapes, tackling life, loss and love. The bluesy “Who Have You Been Loving?” speaks to an unfaithful act and features lovely backing vocals. Long repeatedly questions the faithfulness of a lover and puts the onus on the one who wronged him to “owe an apology.” Listen to this voice. Let its soul seep into your soul. It’s time well spent.

Your blues influences really come out on this record. How did you become attracted to the blues growing up in England?
My dad was into it. I really liked it. When I first picked up my guitar, I discovered you can learn so much from blues players. It’s a sinful form of music and there is so much emotion in it. The lyrics, with topics such as “this woman’s left me” or “the devil’ or ‘drinking,” all that kind of stuff, as a kid, I found cool and exciting. The stories of the artists, such as Robert Johnson and SunHouse, felt otherworldly; I felt like these guys were from another planet.

Did you channel that otherworldliness into your music?
It’s had a lyrical effect, for sure. Topics like your girlfriend leaving you, not having any money and somehow being oppressed, those subjects all come out on A Winter’s Tale.

Any particular songs that are more soaked in this blues influence than others?
“Who Have you Been Loving?” asks that blues-kind of message. I think of the blues as you versus the world; I felt that way with that song. As a songwriter, you always feel like it’s you against the world.

The Best Golf Courses in the World