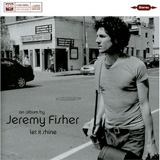 Over coffee at Toronto’s Rivoli, Vancouver songwriter Jeremy Fisher happily chats about his new album and his love of riding on two wheels. After getting lost the night before driving back from Buffalo to a show in Kitchener-Waterloo the Hamilton-born guitar-slinger is feeling a little fatigued to say the least; nothing a little cup of joe can’t cure.

“You caught me at a good time, after my morning coffee,” he says. “The first sip is like a placebo effect for me, really. I think the caffeine manages to dull out the headache I would otherwise get.”

Listening to Fisher’s major label debut, Let it Shine, released October 12 on Sony Music, headaches aren’t likely. Fisher’s music literally shines with hook-laden melodies, smart, honest lyrics and a soulful delivery that would make even the most curmudgeonly critic smile. Think the early folk tales of Bob Dylan mixed with the pop sensibilities of today’s troubadours such as Jay Farrar and John Mayer and you begin to picture Fisher’s muse. The 11 tracks that comprise Let it Shine are heartfelt compositions that showcase Fisher’s reflections on a life that he often doesn’t understand.

“I find that I don’t understand my life at the moment,” he says. “It’s only when I can look back five, 10, 15 years that I can gain an understanding for what was really going on in my psyche.”

During the past decade, Fisher’s music has allowed him to travel many roads and delve into the profundity of life. From busking on the sidewalk in Seattle to playing cover songs for drunken jocks, Fisher has traveled across the country several times. He’s no different than the average aspiring rock star, but what makes Fisher’s journey unique is that he’s crisscrossed North America on his bicycle. During his last trek across country, entitled One Less Tourbus, Fisher performed more than 30 shows and covered 7,500 kilometers from Seattle to Halifax over six months riding his two-wheeler.

“It changed my life the first time I did it,” says the perpetual pedaller. “It gave me faith in humanity and it makes you feel great. Getting to a show after riding a bike 50 miles may sound rough, but you get all the endorphins going and it’s better than sluggin’ back a few beers.

“Cycling is like a drug,” he adds. “It really gets your energy level up, and it also gives you something to talk about on stage. I feel really alive when I’m touring around that way.”

With Sony’s backing, Fisher’s days of pedalling from show to show will be more limited as the demands on his time increase, but this major label support is welcomed. It allowed him to film his first video – “Lemon Meringue Pie,” which was taped outside Toronto in a man-made western town called Dockville. The video was added to MuchMoreMusic’s play list in mid-September.

“It was tons of fun,” he says of the experience. “I was dreading it because I’m not a big fan of photo shoots. I thought it was going to be like that, but worse. We had a cast of 25 people and because it was a fairly plot-heavy video and there was such a big cast, I just got to watch for a lot of the day.”

With dogged determination and sincere stories, watch for Fisher to continue to shine for years to come.