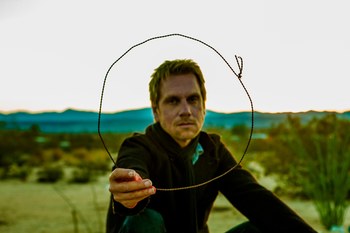 Once you find the right subjects in which to engage singer-songwriter David Poe in conversation, youâ€™ll find the critically acclaimed musician has no shortage of opinions.

Catching up with Poe via cellphone in Newmarket, NH, where he was prepping for a show that evening with fellow songsmith Duncan Sheik as part of the Yellow Umbrella Tour, the New-York based artist chatted about his new record (Love Is Red), the new project he’s involved with ( www.theartistsden.com) and his views of the current state of the mainstream music industry.

ChartAttack: I understand you recorded your most recent record Love Is Red in Germany in the middle of winter. How did you choose this location and tell us about the experience?

David Poe: It kind of got chosen for us. We had plans to make a live album on our last European tour and logistics dictated that we hunker down in a studio and do it there. I think it was the German label guy that found this strange, old studio in Berlin near where the Wall used to be. It was basically a glorified studio for heavy metal bands. It was funny because we went there and the guy who was in the heavy metal band and also the engineer said “I have 50 amplifiers…” we said “great,” but what he didn’t mention was that he had 49 Marshall Stacks and one Roland jazzcore amp that was in disrepair in the corner… another reason why it became an acoustic record. That combined with the cold and general greyness of Germany in winter. The cool thing about it was that [the engineer] had a bunch of old vintage gear that really lent themselves to making a record like that, which is essentially a live record. We maybe put four overdubs on the record.

Tell me about The Artist’s Den [theartistsden.com]?

This is a group that believes that great music deserves a great audience. It’s doing independent, strategic marketing for amazing musicians and basically getting those songs and those performances out to the people that still care about this “thing.” This is the thing… you have a lot of people that will pay $100 to go see Neil Young at Madison Square Garden and they have never heard of Ryan Adams, Regina Spektor, Ed Harcourt, Duncan Sheik or whoever. I mention those artists specifically because they are artists we have worked with and put on this compilation.

We are getting sponsorship from non-musical, hopefully non-evil companies to underwrite some of these tours and some of these shows. What it [theartistsden] is, is that we put on concerts in unusual and intimate venues: lofts, galleries, black box theatres. We have done one at the Apple Store in Soho and Christie’s Auction House in midtown Manhattan. So far we have launched in eight different cities and we will probably be 15 by the end of next year, including Canada and parts of Europe. It’s really about getting the music to the people that are going to like it by building up databases in each town. So if we are trying to fill a 500 seat venue we’ve already got 5,000 people that want to come to the show even if they don’t know who the artist is, but trusting us as a curator for something that is significant. If you are living in the suburbs or not in an urban area or you have kids or you are out of college or you don’t have time to surf the internet for the latest Modest Mouse download. It’s very difficult for those folks to find out what’s happening and thus every once in a while you have a gorgeous record like the Norah Jones record or the O Brother Where Art Thou? soundtrack and then all these people, after repeated impressions, poke their heads up and buy the record in droves because it has been vetted by the culture. But, there is nothing on the radio for the most part, there is no MTV for people who write songs with great words and great melodies and for people who are really fantastic songwriters and bands.

What do you think of the mainstream music industry today?

The record companies figured out a long time ago that most people don’t like music. Record companies figured out a way to sell music to people that don’t really like it. They can’t really be blamed for being the arbiters of taste for a culture because they are businesses with shareholders and now more than ever businesses with shareholders need to show a fast return or if not you are going to get fired. The heyday and zeitgeist of Elecktra Records in the ’60s and ’70s or the way Capitol used to be or the way IRS was in the ’80s or Sub Pop was in the ’90s is pretty much gone. The record companies put out a lot of crap and they spend a lot of illegal payola to get stuff on the radio. They do all those things, but they are just businesses, so we shouldn’t expect more from them. Now, not only because of the internet, but because there is a part of the mass culture that really is interested in something genuinely good. Whether it is an amazing glass of wine or a special coffee, or they want to make sure their sweaters were not made by sweatshop workers, so they pay a little more for it; the same thing is true of music. You do the math. I sold 100,000 of my first record and the company was not particular interested in taking it from 100,000 records to one million because so much money has to be spent. But, to me, I was like, “I just sold 100,000 fucking records!” It blew my mind. There is 100,000 people out there that are ostensibly listening to my shit. If I put up the money to make that record and then made the money from selling that 100,000 records everything would be groovy.

Erin McKeown: On Latin And iPod Love
Scroll to top