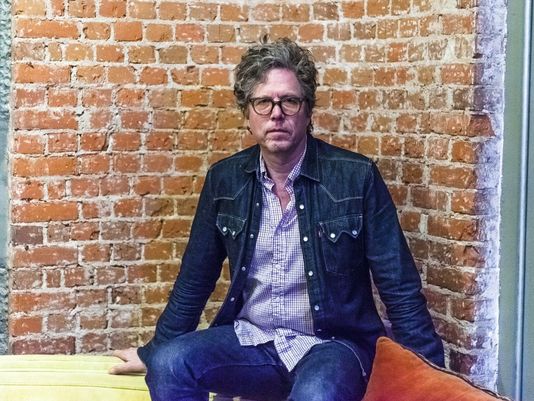 It only took 20 years, but Gary Louris finally meandered down that road that most songwriters seek and put out a solo record.

“I’ve been in a band for quite awhile, and it took up most of my time, and I felt like I had enough of my personal stuff expressed through The Jayhawks that I didn’t need to put out a solo record,” he says. “Now that that band isn’t together anymore, it was just time.”

As a founding member of The Jayhawks and their lead singer and guitarist on three of their critically acclaimed recordings “Sound of Lies,” “Smile” and “Rainy Day Music,” a member of the alt.-country super group Golden Smog, and a producer and mentor for other roots rockers such as Canadian psychedelic-country group The Sadies, Louris needs no introduction to those in the music industry.

“Vagabond,” released in mid-February on Rykodisc, is an introspective affair featuring 10 well-crafted and emotive songs. The low-fi acoustic recording allows the listener to focus on the lyrics and Louris’ most powerful instrument – his voice.

“I certainly was at a crossroads trying to figure out what I wanted to do with this record,” he explains. “I can be all over the board musically. I can be poppy, and I can play around with synthesizers and stuff like that, and I can make stuff that sounds more modern, or I can do the more organic, rootsy and traditional thing, which is what I felt like doing right now…that’s what felt most comfortable to me.”

“My voice being what it is, which is somewhat of a quiet instrument, I thought it would be best served by a quieter backdrop,” he continues. “That’s what lent itself to the more acoustic feel. I’ve always had a battle with that on stage with the guitar to get my voice heard. So. I thought let’s make something that is really about my voice, the guitar and the song, and I was a little more diligent on my lyrics this time, and I worked a little harder, kept coming up with more verses and more choruses.”

For the recording, 40-plus songs were whittled down to the 10 that make the disc.

“I’m never short on ideas,” Louris laughs. “They are not always good ideas, but I have a lot of ideas…some songs rose to the occasion and peeked their head out and became real winners and other songs I thought were going to be the heart and soul of the record, didn’t even make the record…it’s funny how that works.”

On the opening “True Blue”- one of these heart and soul songs that made the record – Louris sings softly in the chorus, “strip it down to what you can believe in.”

This search for meaning in life’s madness continues in the second track, “Omaha Nights” where the songwriter simply asks: “Will we find what we want/along this finite journey.”

This questioning sums up the spiritual path the songwriter trod for this solo introspective journey where Louris and the listener learn together that the questions is what matters, not the answer since the reason for our existence often can’t be found.

“You finally figure out that you are not going to find the answer…well maybe if you are a Tibetan monk, but I don’t know…most people don’t figure it out, and there are books and books to prove it,” he says. “There are people who have been here way before us and with greater minds than my own who have never really solved life’s questions. I figure it’s the old proverbial ‘it’s the journey, not the destination,’ but you still can’t help but be frustrated that you’ve been here so long and still you don’t have a clue as to why you are here and exactly what you are doing. Some of that frustration and mystery came out in the lyrics.”

Despite this spiritual searching, when it comes to the reasons for making music, Louris has realistic expectations for his art. He doesn’t have aspirations that any of his songs will be a top-40 hit, and he’s fine with that.

“That’s the beauty of not being a failure, but not being a huge success either,” he says. “I’m not chasing radio play or anything, so in certain ways I’m free. I don’t want to say I envy myself, but there is a certain freedom to not trying to do something that is going to fit in with some format.”

“Vagabonds” was recorded at Sage and Sound Studies in Los Angeles and engineered and co-produced by Thom Monahan, who has worked with J. Mascis and the Pernice Brothers.

Chris Robinson of the Black Crowes – an old amigo of Louris’ – produced the record.

“Chris brought a comfort level to the studio,” says Louris. “He’s somebody I trust who gives you his full attention…you know he is embracing it 110 per cent where some people you are just one project of many. For Chris, this was a sacred thing. He’s a big fan, he’s been my friend for a long time, and he’s not a yes man. He’s got a strong personality.”

“I knew he would handle it with care, and he did.”

“Vagabonds” was recorded live and has an organic vibe to it.

“I was trying to figure out the best way to make this record,” Louris explains. “I could have played with my studio wizardry and worked with my ProTools in my basement, which I know how to do, but I like the synergy and the weird cosmic energy that happens when people are in a room together and are playing together at the same time.”

“I’ve done it many ways, and some of my favorite records have been looped and sampled and done in crazy ways, but I still think the best thing for me and my kind of music is when you have people capturing a moment in time, live, in that room…it’s magical because it’s kind of that frozen moment from the past. Instead of ‘well the bass was done on Tuesday, and then someone came in and sat in the control room and played along, which is not very emotional, you look across the room, and you see somebody else bobbing their head getting into you, and then you feed off of that. That’s the greatest music.”

Ames enjoying having son on the bag
Scroll to top