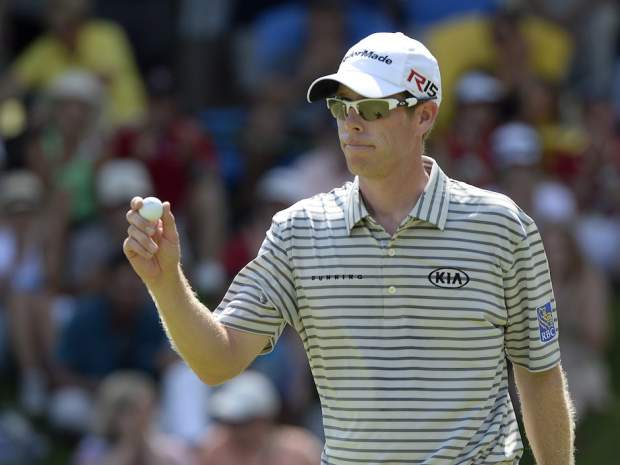 While the Pan Am Games-related traffic jams scared Canadian David Hearn from sleeping at his parents’ this week in Brantford, Ont. (where he grew up), he’ll still feel many of the same creature comforts.

“This is as close as we get to me being at home,” said Hearn on Wednesday, whose best finish on the PGA TOUR this year was a runner-up at The Greenbrier Classic two weeks ago, where he lost in a playoff. “I obviously get a lot more friends and family coming out to watch. It’s fun to play golf in front of everyone.”

Before the real golf begins Thursday, Hearn took time to give back to the local community by announcing the launch of a new charitable foundation. The David Hearn Foundation will support the Alzheimer Society in improving the quality of life for Canadians affected by Alzheimer’s disease and other dementias, with initiatives to build awareness and raise funds.

“I’ve had a relationship with the Alzheimer’s Society for a number of years now,” he explained. “We’ve been raising money through a golf tournament that I host after the Canadian Open every year. To finally take that next step and form a foundation it means a lot to me to be at that point in my career where I can give back and do charitable things through this foundation.

“It’s been a lot of hard work getting it going,” he added. “But we’re excited about it, and I’m excited about putting in time and giving back and the efforts that we can do through the foundation.”

After more than 150 events, Hearn is still searching for that elusive first PGA Tour win; for him, winning any tournament is his top goal. He’ll begin this quest on Thursday when he tees off at 12:35 p.m. with Venezuelan Jhonattan Vegas and American Kevin Chappell. And, if that victory came this week — on home soil —it would just make it that much more sweet.

“Winning the RBC Canadian Open would mean a lot, without a doubt,” said Hearn. “Winning any PGA Tour tournament would mean a lot. It just doesn’t happen that often. To be able to do it in Canada in front of everybody here would be the highlight of my career. We’ll see what we can do.”