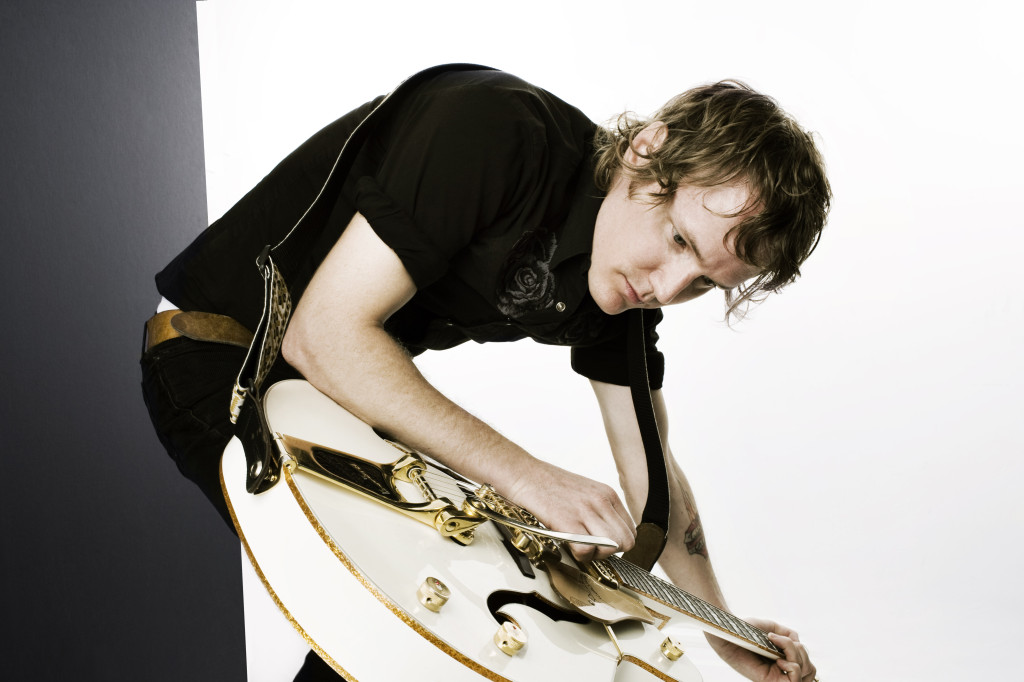 You’d expect that Canadian indie musician Luke Doucet would log serious mileage on a cross-continent tour. But how about 100K per week on his legs?It’s all part of staying happy, says the five-time marathoner.

Luke Doucet has an insatiable appetite to achieve. Whether it’s honing his guitar chops or improving his last running times, the songwriter is driven by a passion for perfection. Currently in the midst of a North American tour with Whitehorse (the duo he plays in with wife Melissa McClelland), the musician is a relatively new runner. He started running three and a half years ago. At the end of his first week of running every day, he ran a half-marathon. Since then he’s completed five marathons and three half-marathons. In April, he was scheduled to compete in the Boston Marathon for the first time.

When the songwriter and I connected, he and McClelland had just crossed into the U.S., driving to Minneapolis, Minn., where Whitehorse was playing a gig the next night. Running is therapeutic, Doucet says. “It’s the most enjoyable part of my day,” he says. “Melissa will tell you that I never come home from a run in a worse mood than when I left. I’m always a nicer person – a happier person. It sounds like something that would be hard to squeeze in when you are on tour, but it’s actually become an essential part of my mental health.”

How does the musician squeeze in these training sessions, logging between 90k and 100k per week, with long runs up to 33k?

“I get a lot of help,” Doucet says. “We arrive in a new city in time to load in. In the hour it takes for the road crew to load the gear into the venue and set up before sound check, I can go for a good run.”

Doucet admits this rush to squeeze in a run is a blessing in disguise. “I’m usually conscious of the fact that I have to be back for sound check in 45 minutes,” he adds. “As a result, I tend to run fast because I’m trying to keep up with my schedule.

While Doucet does not listen to music during a run, it does inspire his writing. “I run quiet, but as a result, I write a lot of music when I’m running because it’s a very rhythmic thing. You’re breathing in time with the pace of your feet, so, in effect, your whole body is dancing,” he says. “I find running is a very musical experience.”

Songs such as “Devil’s Got a Gun,” from the latest Whitehorse record, The Fate of the World Depends on This Kiss, was a product of running. “I had the guitar hook in my head for literally years before Melissa and I actually sat down and put words and chords together,” he reveals. “Our last record, Emerald Isle, which is about running to some degree, was also written during one of my runs.”

Last fall, in between Whitehorse gigs, Doucet ran both the Philadelphia Marathon and the Atlantic City Half-Marathon. In Atlantic City, he surprised himself with a personal best of 1:21, good for second place in the 30–39 category. “At about the eight-mile mark, my Nike+ watch started showing consistent declines in my average pace,” he recalls. “I freaked out because I felt like I was really pushing. So I pushed harder until about Mile 11 when I realized my watch had lost the satellite. Then I really panicked because all of a sudden I was running blind. I had no idea what kind of time I was running, so I pushed even harder. I had no idea I was anywhere near the front until they announced the winners.”

Doucet closes our conversation by crediting running coach Tania Jones who helped him train for several marathons in the past two years. “I suffer from a couple of problems. As a new runner and someone who approaches things ambitiously, I run the risk of injuring myself by being cocky,” he concludes. “Having somebody like Tania in my corner has been really wonderful.”