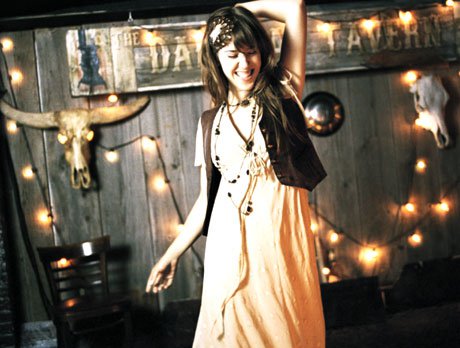 “Ive been broken too, how about you? Thats the theme of Ryders new record. Following the success of If Your Memory Serves You Well, which went gold and won a Juno, the 25-year-old returns with a disc that oozes angst. The cathartic collection finds the singer with a broken heart searching for the “truth that exists deep within us all.” Rather than running from it, she confronts it with music. Right from opener “Sweeping the Ashes,” one feels this anger and sadness, and these feelings are sustained throughout the remaining 12 songs. Closer “Dark as the Black” epitomizes the emptiness Ryder felt when she penned these songs. The melancholic, acoustically-inclined ballad, with its “one world/one love” message of hope, hints at U2 and Bob Marley. And, like those prophetic artists, Ryder shows the world is in pain through well-crafted lyrics. She sings, “Theres a crack in the ground from old New York all the way to Minnesota/I can hear by the way 10,000 lakes are screaming for more water.” Ryder’s message is that our world is like our broken hearts: it’s cracked and can’t be mended until we acknowledge its sickness. Deep, yes, but delivered with her world-weary voice it’s a message that hits home, showing the continuing maturation of this expressive songwriter.

Why is this record filled with so much angst?
It’s based on things I’ve experienced in the last little while. The world only caters to the fact that people are supposed to be happy and enjoy life, and sadness and anger are not really dealt with. It’s a painful world; there are a lot of things going on in the world that are really painful. There are a lot of broken hearts walking around in denial. I noticed in myself there was a lot of that going on. It was okay to be happy but it wasnt okay to be sad. It’s one of those things that before the beginning of time, you just want to be happy all the time and I think the only way to achieve that true satisfaction with your life is to acknowledge your true feelings. This is a record of acknowledging where I was coming from and what I was going through at the time. It’s been a very successful couple of years and Im doing what Ive always wanted to do with my life: perform, live and tour around the world and play music. How great could that be? It’s been amazing but then there have been all these ideals that can be shattered, like the idea that being a touring musician is a dream and it’s all just a party and a lot of fun. But there is another side to it. You are going out there and sharing your very personal, true places of yourself with other people in the hopes that you can connect and communicate and feel like you are part of the same family. There is nothing like having someone know where you are coming from but that can also be painful to consciously be in that conversation.

It’s a little ironic then that Is It O.K. was recorded at the same studio where Rumors was born.
Absolutely. I was down to two producers for the record, both who I really loved. They were awesome people and I couldnt choose between them. I was out with one of them and I sent a little message out to the universe while he was up getting our food. “You have to help me out here, universe, and let me know if this is or isnt the producer I’m going to be working with, I asked.” He sat back down, we started talking and I said my favourite record is Fleetwood Mac’s Rumors and he said, “no way, that was recorded in my studio,” so it was a done deal. Another of my favourite producers, T-Bone Burnett has a space in his studio as well. Later, I learned the Maharajah recorded there with the Beatles and the Stones; it was pretty awesome.

Did you feel like you were channelling Stevie Nicks a little?
Not really but I definitely felt the history in the building. There was a magic that was there that you could almost catch it and taste it. The history in a building is something I have always been intrigued with and I’ve always been pulled to; I can feel the energy of what has gone on before. When I got there I definitely felt that and it was a huge inspiration. Recording the songs in Stevie Nicks’ vocal booth was absolutely surreal; they lit candles for me and there were stained glass and mirrors everywhere. It was a total throwback; it was amazing. It felt like a vacation to me, like I was inside a movie.

What’s the significance of the title, Is It Ok?
Its really about connecting, taking the time to connect with that inner voice to really find the truth to what is going on outside of you. You need to take time and make space to have quiet time and listen to that part of yourself to see what’s going on and live a life of truth.

Tell me about album closer “Dark as the Black.
I wrote several of those songs after I had just lost someone in my life who was really close to me. Bonnie ODonnell, who was my co-manager; she was an amazing woman, died young of pneumonia at 32. It was very sudden and very tragic. It totally threw my world for an absolute loop and still has. It’s very odd to not have her around because we worked together for about six years and we were close friends. That led to an onset with a lot of my connection with sadness and darkness. That particular song starts out about a relationship and how there is sadness when you have your heart broken. Then, the second verse is about that relationship in regards to the place you are at in your life: your relationship with your surroundings, your home. The last verse is about how that is a total microcosm of how the world works and how the world is in a lot of pain. Yes, there is a lot of good in the world and a lot of amazing things happening but there is this overriding sadness and sickness that is happening and has been for a long time. You cant get any darker than a really deep hole. You can’t see the end of it [but] it just needs a little spark of light to change it. Everything in the world that is alive has a voice and thats the line about “10,000 lakes screaming for more water. Connecting our personal experience in our body to that of the world, it is really the same thing. We can find all the answers to what is going on out there inside ourselves and that can be really painful, but I think that is the most important and courageous thing that we can do.

You’re already a seasoned songwriter at 25. Do you have any reflections on your career?
The more I do this the younger I feel because there is that saying, and I dont even know if it is a real saying, but it’s something I thought of that I’m sure has been out there for a long time: the more that Im alive the less I know and the more I think I know the less I know. Im finding that with being a musician and touring and just being alive in these times.

There are photos of Toronto’s Dakota Tavern in the liner notes. Any significance?
Dear friends of mine own it and I was there a few days after they opened it. I was sad I missed the exact opening day, as I was on tour. It means a lot to me. That’s where I go when I want to see my friends when I’m home from tour because I know they’ll be there.