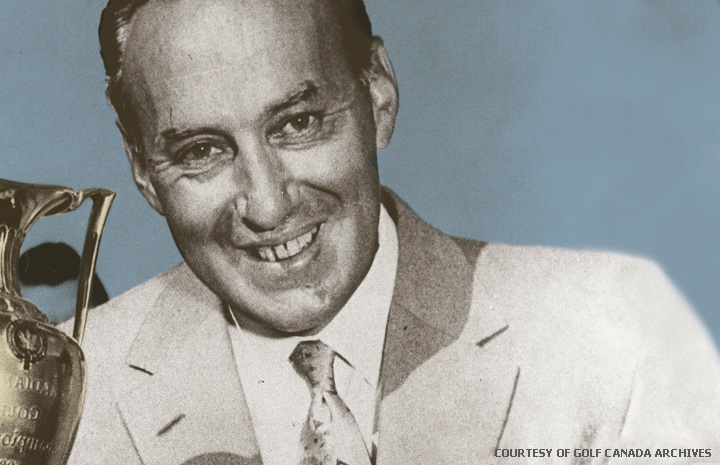 In most sports, home-court or home-field advantage — with fans cheering your every move — is the deciding factor that makes an athlete, or team, rise to victory. We’ve certainly seen that the past two weeks with Canada’s record performance at the Pan Am Games.

So, why is this not usually the case in golf? Sure rowdy crowds during team events such as the Ryder Cup and President’s Cup, often help, but what about all those decked out in red and white at the RBC Canadian Open, which returns to Glen Abbey this week?

The pressure is more than most Canadian pro golfers can handle. It’s now been 61 years since Pat Fletcher won our national Open. Imagine the euphoria and swelling of national pride if one of our own won this week.

With 16 Canadians teeing it up at Glen Abbey – which will host the tournament for the 27th time – there’s a good chance this drought could finally be snapped. And the tournament organizers, as Stephen Whyno of The Canadian Press reported this week, are doing what they can to give the “hometown” contingent an advantage over their international competitors.

First-year tournament director Brent McLaughlin heard from players that there’s not enough “Canadiana” at the RBC Canadian Open. They’ll get their wish on the course this week with the addition of many Canadian flags, including a 30-by-15-feet one behind the 18th green.

It’s all an effort to make the Canadian Open more Canadian.

“I think we’ve struck a balance of the Canadiana,” McLaughlin said in a phone interview last week. “We’ve lost touch with kind of the stuff that makes us uniquely Canadian: the Mounties and kind of those stereotypes that you always hear.

“I know we don’t like it when it’s talked about about us, but it’s nice when we can sort of say, ‘Yeah, you’re in Canada. It’s a little bit different here.'”

Graham DeLaet – a little jet-lagged after a Monday finish at the Open Championship – comes to the Abbey at No. 84 in the world golf rankings. DeLaet and David Hearn both arrive in Oakville, Ont., in fine form. DeLaet finished fourth at the Travelers Championship a few weeks back and Hearn had his best finish of the season with a runner-up at The Greenbrier Classic a fortnight ago.

Other Canadians to watch this week include PGA Tour rookies Adam Hadwin, Nick Taylor, and Roger Sloan. Hadwin is no stranger to the Open, but this is his first time playing as a full-time Tour member.

“Normally this event is a bit of a one-off for me,” Hadwin told reporters Tuesday. “To come in having played a full season on the PGA Tour thus far and having come in as a full member, it’s a little bit different, but at the same time, it’s sort of the same. I’m going through the same procedures to prepare for the event, and I’m looking forward to a great week here at Glen Abbey.”

Some of the young guns in the 156-player field are: long-hitting Taylor Pendrith, Adam Svensson, Garrett Rank, Corey Conners and amateur Austin Connelly (who finished fifth in the Pan Am Games last week).

A notable Canadian missing is fan favourite Mike Weir. The Canadian Golf Hall of Famer announced last week he would not be at Glen Abbey this week (which would have been his 25th Canadian Open appearance) due to personal reasons. He’s taking an extended leave from the game.

While there is no Weir, all of the red and white flags and homer crowd in attendance at the Abbey is sure to give the rest of the Canadians a boost, and just maybe that’s the extra edge to snap that 61-year drought.

“When you have so many people pulling for you, behind you, wanting you to do well, if you’re a little bit down and you hit a good shot and they go crazy, it’s certainly helpful to pick you back up,” Hadwin said. “When you’re playing well, you sort of ride the momentum of the fans and the crowd. You see it all the time in other sports where one team is down, their home crowd gets excited, they get cheered and you can kind of ride that momentum.

“I think you can do that here. Especially if you got into contention on the back nine on Sunday, I think it will be a huge help and huge bonus to have that many people behind you and want to see you win.”

Serena Ryder: Is It O.K.