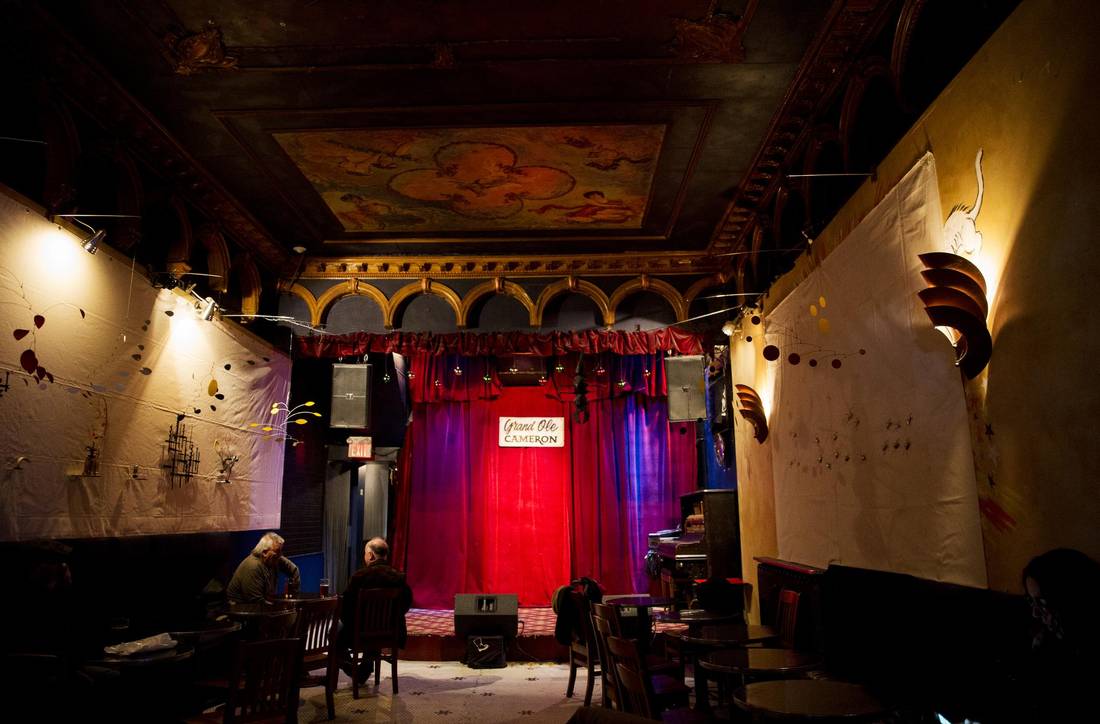 It’s a Thursday night here on Queen Street West. Inside The Cameron House, Corin Raymond and The Sundowners are on stage. It’s standing room only for 100 music lovers who cram the narrow bar’s front room to hear Mr. Raymond’s weekly pay-what-you-can gig – one of the longest running artist residencies in Toronto, at 13 years and counting. Above the bar, a sign says: “This is Paradise.”

The Cameron House may indeed be a Utopia for musicians and fans alike but, along with the nearby Legendary Horseshoe Tavern, which turned 70 this year, it’s one of the few left in the downtown Toronto neighbourhood that once had handfuls of places where live music could be heard on a nightly basis.

Leave The Cameron and head north on Spadina Avenue. Eventually, after a few blocks, on the west side, you’ll stumble upon The Silver Dollar Room, which opened in 1958. The venue, where Bob Dylan, Levon Helm (The Band), Barenaked Ladies and Blue Rodeo once played, closed this past May; a high-rise student-housing complex is set to take its place.

Other notable recent venue casualties in Toronto include The Hideout, Soybomb, The Hoxton, The Central, Holy Oak, Harlem, and Seven44. They followed the earlier exit of the The Colonial Tavern, Albert’s Hall, The Gasworks, The Edge, The Diamond, and The Bamboo. As Toronto arts weekly Now Magazine noted last March, seven music clubs alone closed in the first three months of 2017.

They’re falling in succession amid a perfect storm of economic factors that threatens them and other small businesses: As core real estate soars in value, property assessments and taxes rise in concert. Landlords then either find wealthier tenants who can afford escalating rents or sell to developers eager for their coveted properties.

The net effect for musicians, particularly the younger ones learning their craft and not yet ready for the city’s bigger halls and arenas, is troubling – fewer small venues means fewer opportunities to play. Fans lose out, too.

Despite what many call a crisis, it’s not all doom and gloom, though. Amid these countless closings, some Toronto venues have reopened (Hugh’s Room) or are set to reopen (El Mocambo) with new looks and new business models. Additionally, Massey Hall, part of the non-profit charitable corporation that also operates Roy Thomson Hall, is entering the second phase of a massive revitalization project that will include two new performance spaces.

The other good news: City councils, not just in Toronto, but other metropolitan areas such as Hamilton and London, Ont., are taking notice, adding “music offices” inside their local governments as liaisons with the music industry. “The news of venues closing is always a concern,” says Toronto councillor Josh Colle, who is a member of the Toronto Music Advisory Council (TMAC). “It alerts us to how important these venues are.”

Mr. Colle says TMAC is working on dozens of reviews related to live music venues: everything from bylaw changes to conversations between developers, planners and landlords. He acknowledges that taxes and rising real estate affects more than just music clubs. “We are losing bookstores, green grocers, shoe stores, etc.,” he adds. “The way MPAC [the provincial Municipal Property Assessment Corp.] assesses properties based on their highest and best use is a threat to every local business.”

Fellow councillor Mike Layton, who previously served on TMAC, adds: “There’s no doubt rent is playing a significant role in many of these closings. Unfortunately, there is not much we can do in limiting commercial establishments and the taxes they pay; that’s not within our powers but it is adding significant pressure. In municipal planning, we don’t zone for people, or for the tenants, we zone for the use.”

The cost of real estate makes it prohibitive for certain kinds of businesses such as live music venues to thrive in certain neighbourhoods. Besides trendy Queen Street West, take Yonge Street. This is an issue close to Mark Garner’s heart. Following the recent closure of Hard Rock Cafe on Yonge after its lease expired and the owner was asking for $2-million a year in rent, plus taxes and other expenses, the chief executive officer of Downtown Yonge Business Improvement Area is now working to help protect more of these legacy venues.

“We do a great job in Toronto of protecting the facades of our buildings, but we don’t protect the interiors,” Mr. Garner explains. “Taxation increases are really what is decimating these businesses – especially in our patch of the city. What happens on Yonge will eventually happen on Ossington [Avenue] and other neighbourhoods.

“We did an analysis of buildings on Yonge, from Queen Street to Bloor, and found buildings appraised in 2012 for $2.6-million are now valued at $12.2-million,” Mr. Garner continues. “How do you phase in that kind of tax increase?”

More than 100 people recently attended a live music town hall at Lula Lounge on Dundas Street West in Toronto. Present were Mike Tanner of Toronto’s music office and Jeff Cohen, the majority owner The Horseshoe and Lee’s Palace. Other venue owners, music industry stakeholders, journalists, artists and patrons of live music also attended. Issues discussed and debated ranged from loading zones outside venues and noise bylaws to what everyone agreed was the elephant in the room – rising real estate prices in the metropolitan areas across Canada and the ensuing rise in commercial property taxes.

Most club owners lease space from a landlord. When that lease expires, there is often no barrier to how much that rent can increase. While rent control exists for many residential properties, that’s not the case when it comes to commercial buildings.

Sam Grosso, owner of Cadillac Lounge on Queen Street West, is one of the lucky operators who also owns the building. Still, it’s a struggle. And, that’s one of the main reasons the small-business owner recently decided to put the building up for sale.

“I pay my mortgage every month, not rent to a greedy landlord who keeps jacking up my rent until my lease expires,” Mr. Grosso explains. “It’s a double-edged sword. I bought the property for a good price years ago, but I’m still struggling to make the business happen and get people in the door.

“Meanwhile, I’m sitting on all this property that is worth a lot of money. You are beating yourself against the wall, and sometimes I ask myself: What am I doing?”

At the end of the day, Ms. Benjamin at Music Canada Live says all discussions about live music venues and real estate need to be long-term; there is no short-term solution.

“It’s important for TMAC and for other cities to pay attention and prioritize live music spaces in that big picture,” she says. “Once they are gone, it’s hard to bring them back.”

Meet Tebey: Professional Country Songwriter has his own EP To Do