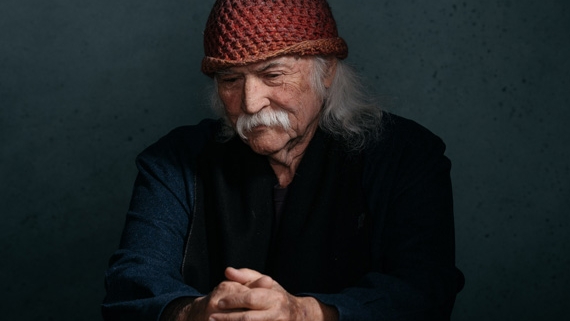 Time is not on David Crosby’s side.

If this is indeed his final act, the legendary songwriter has no plans to go gently into that good night.

As a two-time inductee into the Rock and Roll Hall of Fame (The Byrds and Crosby, Stills & Nash) with five decades of pop stardom behind him, the reality is that musically he has nothing to prove; yet, in the last five years, since the dissolution of Crosby, Stills, Nash & Young (CSNY), following the supergroup’s 2015 tour, he’s had one of the most productive periods of his career, releasing four records (with a fifth on the way).

This creative reawakening piqued the interest of filmmaker A.J. Eaton. The result: the director’s first full-length documentary, David Crosby: Remember My Name, which had its debut at the Sundance Film Festival this past January.

Honesty is the film’s central conceit. Twelve-step programs teach us that honesty is all we’ve got. As a past AA member (for 14 years) the songwriter embraces these teachings. Rather than resort to a puff piece or hagiography—like so many celebrity documentaries—Eaton, co-producer Cameron Crowe, along with their main subject Crosby, knew that to do this right, it had to be the most honest piece on the pop icon ever produced.

BeatRoute: Why now? What was the inspiration to create and release this documentary at this time?

David Crosby: Largely because of this surge of work. It doesn’t make a whole lot of sense to me. I was supposed to be dead 20 years ago. At the end of your life, you should just wave and go off into the distance gracefully, but instead I’ve made four records and into a fifth one. That is not how it is supposed to go. This got AJ’s [director A.J. Eaton] attention. He thought it was fascinating and said he wanted to do a documentary about it. I was like, ‘Yeah kid, sure, whatever!’ Then producer Jill Mazursky mentioned it to Cameron Crowe. He’s known me since he was 15. You know the Almost Famous movie, right? He was the kid and we [CSNY] were the band. Cameron said, ‘Let me ask him the questions.’ Since he is my friend, they knew I would open up to him; he knows where all the bones are buried. He was in the dressing room when the bones were being buried!

BeatRoute: As you told me when we jumped on this call, some people felt this film is too in-your-face, that there is too much truth and honesty to handle, but that’s the point, right?

Crosby: Definitely. Cameron [Crowe], AJ [Eaton] and I have all seen how other people make documentaries and we did not want to do that. What I call a shine job, where they say, ‘isn’t that great, isn’t he cute, he is so lovely, etc. etc.’ Those types of documentaries are bullshit. They are as deep as a birdbath. They don’t tell you anything about the person you want to know. I want to know what is that person really about: who do they love, what do they want to fix, what is going on in their head, and what really matters to them, not how many records they sold in their prime. All three of us had a unity of purpose. We knew the level that was acceptable to us.

BeatRoute: Staying with the honesty theme, you mention in the film that you’re a ‘flawed human.’ I loved this brutal honesty. Not many people are confident enough and/or are too scared or afraid of what others will say. How and why did you do it?

Crosby: It’s a matter of choice and how you go about things, really. None of the three of us thought we could do it any other way. If we were going to do this film, it had to be brutally honest. Cameron asked me the hardest questions I’ve ever been asked.

BeatRoute: Were there any you didn’t or couldn’t answer?

Crosby: No, I made a promise that I would answer every question he asked me.

BeatRoute: That must have been uncomfortable for you.

Crosby: Yes, very uncomfortable. There were a couple of times I said to them, ‘Don’t put that in the movie,’ and they still put it in; my only job in the movie is to not lie. That was my main contribution.

BeatRoute: I’m guessing there was a real cathartic effect to the whole exercise. Was a weight lifted for you during the process?

Crosby: It definitely is a catharsis. It’s the real deal man! I got to lighten my load; that’s what they teach you in 12-step programs: to look at your life, your mistakes, and your achievements, then learn from it, set it down, and move on. You really have to look inside yourself.

BeatRoute: I loved the stories of your earliest music experiences and how these moved and shaped you. First seeing the symphony with your mom and later hearing Miles Davis for the first time. Music really is your life, isn’t it?

Crosby: For sure. I feel music is the gift I was given. That’s an obligation. If life gives you a scalpel you don’t use it to dig weeds, you do surgery.