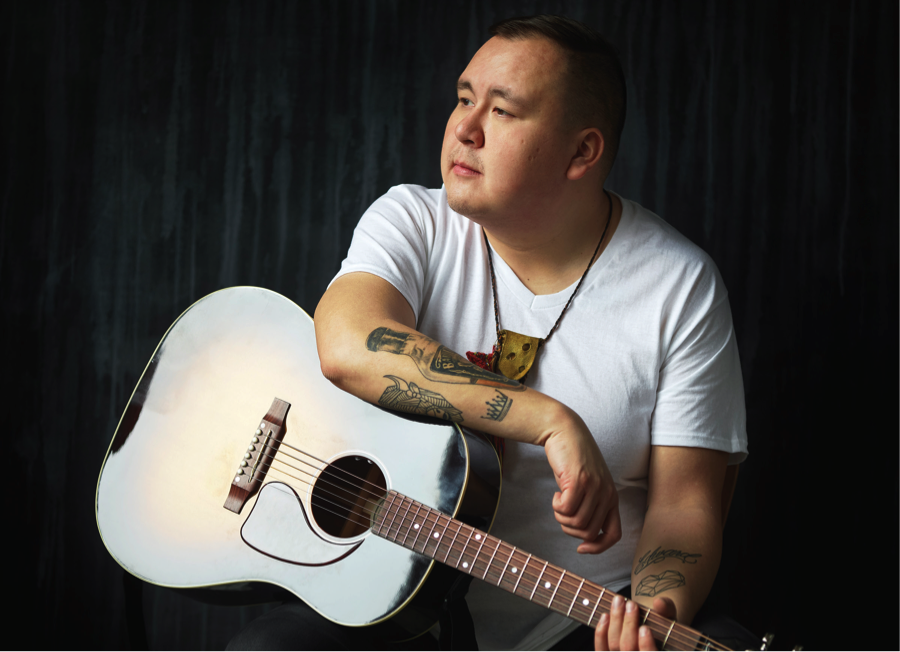 Reliever: a noun meaning something or someone that relieves pain, distress, or difficulty.

Long before he won a Juno for Contemporary Roots Album of  the Year, and left side hustles behind to work full time as a musician, William Prince dreamed of a different calling.

The Peguis First Nation from Manitoba set his head, and his heart, on becoming a physician; he wanted to travel to remote communities and relieve people’s pain. What he didn’t realize is this: despite his path diverging during his university years from doctor to songwriter, his art allowed him to become a different kind of healer.

Through his words, metaphors, and melodies, this musical messenger relieves the burdens of others—sharing his struggles and his gratitude. People find solace in his music. In these days of constant noise, the healing powers of his songs are needed more than ever. Spend time talking with Prince and listening to his music and you come away affected.

“People look for healing and calm in music. William’s music isn’t frivolous or bubble gum for the radio. It’s life affirming. There are healing properties to what he is doing. Authenticity in art is mandatory and William has that in spades.”

When Penguin Eggs connects with Prince, the songwriter is at home in Winnipeg, staring at a cold lunch. When promoting a new record, sometimes just getting a bite in between back-to-back interviews is hard. The artist is not complaining. Prince is full of gratitude.

Despite a recent appearance on CBS Saturday Morning, rave reviews from publications such as Rolling Stone, and sharing the stage in the past with Canadian legends such as Neil Young and Buffy Sainte-Marie, Prince remains grounded. He is happy to talk about his sophomore record with anyone who appreciates his art and is interested in listening. Something about Prince’s honesty and his warm, soulful delivery makes the songwriter a connector.

Reliever, released by Glassnote Records in the U.S. and Six Shooter Records in Canada in February 2020, follows his 2015 debut, Earthly Days. The 11 spirited songs on Reliever offer hope and healing. All are sung with a voice that bleeds passion.

Prince’s pipes are the star instrument, guiding the listener to the heart—and the heartbeat—within each composition. Prince goes through painful reflection. From the heartbreak of realizing the mother of his child is not his soul mate anymore (“Wasted” and “Always Have What We Had”) to coming to terms with the death of his father (“Great Wide Open”) to offering advice to his son (“That’s All I’ll Ever Become”), there is something in these universal human experiences with which everyone can identify.

Take this turn of phrase and wonderful wish from “That’s All I’ll Ever Become”: I want to live to the second last day that my children do / selfishly so I can see them through all that they’ve become.

In “The Gun,” Prince lets go of regrets and realizes he needs to get out of his head before he can truly live and move on, describing this feeling like “living with a loaded gun”. His fatherly advice in this song is simple, yet sincere: It doesn’t matter who you love son / If you don’t love yourself son.

As the songs emerged, Prince’s muse instructed him to throw discontents and resentments out the door. In return, this release offered him a new purpose.

“I was born to sing but I want to exit as a philanthropist, someone who helps and heals,” he says.

As the catharsis of Reliever concludes, gratitude emerges. Each song, like a prescribed pill, offers a dose of medicine that focuses on a different ailment. What he, and the listener, is left with is newfound hope. The simple act of taking these thoughts and letting them pour onto the page was the creative spark his muse needed.

“That was the relief,” Prince explains. “For me to stay alive, I needed to chase these songs. The theme of relief came simply from the fact that that is what I needed most. There are records about drinking, or records of lonesomeness or love, but what I needed most was a break from the ongoing dialogue in my mind: dealing with losing my dad, becoming a dad, the separation from his mother, and the whirlwind from all these hard things I was dealing with in real time.”

Prince sought to balance in his brain these hard truths all while Earthly Days launched the songwriter into stardom. He lived with the grief of these unresolved feelings for years while his career took off. This record was the overdue amends and release he needed to make before he could find internal peace.

“I was in the midst of a dream, yet there was still a cloud hanging over me that I could not shake,” he recalls. “I wrote these new songs as a way to reflect. The songs are not filled with anger, spite, or resentment, but a place of love. Reliever is a piece of art that shows resilience. It tells people how to survive when your engines fail or there is a hole in your boat.”

This honest writing makes Reliever a timeless record. It’s only Chapter 2 in a lifelong story. Forty years from now, just like seminal songs from his writing heroes such as Leonard Cohen, Bruce Cockburn, and Neil Young, Prince believes these pieces will survive and still resonate.

Now that he has found his calling, he plans to make records and continue to heal himself—and others—from Manitoba to Berlin, and wherever else his music finds a home, for as long as his muse delivers these songs as gifts for this reliever to offer the world.