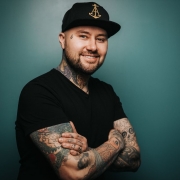 Music brings us together; it helps us heal in these trying times. Artists, and their songs, fill a void when we’re surrounded by emptiness and uncertainty. Aaron Allen, from London, Ontario, is one of many musicians answering the public’s call for new music during the pandemic. Stuck at home, with the family tattoo business – The Taste of Ink (see sidebar) – closed, he’s enjoying time with his wife and two children, and writing away the days.

“I’ve never been busier,” says Allen, who recently landed two Country Music Association of Ontario (CMAO) nominations for both Male Artist and Rising Star of the Year.  “At the beginning, it was hard,” he adds. “Us writers don’t love to do the Skype thing, but now it’s like being in the same room, and I’m firing on all cylinders, all day, every day, doing lots of co-writes for myself and for other artists.”

Allen released Highway Mile on April 3, a six-song EP co-produced with CMAO Producer of the Year Jeff Dalziel. There was a bit of trepidation about putting out new music in the middle of COVID-19, but he figured it was worth the risk.

“At this time people need music more than ever,” he says. The strategy worked: online plays of the new record have already eclipsed two million streams, and continue to climb. The song connecting most with people, and the one recently released to radio, is “Can We Go Back.” Recorded just two weeks before the pandemic hit, it’s a love song to his wife and a nostalgic nod about returning to a simpler time, when they were young and carefree. Allen sings: “I wonder if that tree’s still there/ The one we carved our initials in/ Back when we were kids/ It didn’t really matter where we were at / As long as you were shotgun, holding my hand.”

As if the new EP was not enough, in May, Allen added a publishing deal with Arts & Crafts Music to his resume. He’s excited about expanding his repertoire, exploring more synchs, writing in other genres, and expanding from the sometimes-formulaic structure and rigidity of writing the Nashville way. “In synch you can break some rules, and say some things you normally can’t say in country music,” he says. “I just love songwriting… it’s nice to try something different and learn something new.”

Growing up in London, Allen started penning songs to express his feelings. It quickly became his lifeline. When he was 13, his mother got ill; it hit Allen hard. “She had terminal cancer for many years and I didn’t take it well,” he recalls. “I was really angry. I did not like school. I had this guitar and I locked myself in my room, just shut the world out writing songs.”

Twenty-five years on, Allen still spends endless hours locked away, alone in his home studio, writing away the days. “It’s a part of me,” says. “It saved my life when I was a kid and it’s therapeutic; I would probably be in jail if I didn’t have songwriting.”

The Taste of Ink: Tattoo Artist on the Side

Allen and his wife opened a hair salon and tattoo shop about a decade ago. Realizing tattooing pays more, they morphed the store into The Taste of Ink. Allen says it’s a career where you constantly learn and grow. The songwriter sports many of his own permanent markings of the trade. Asked what they mean, he laughs. “When the shop first opened our apprentices needed someone to work on, so I volunteered… I would not be this covered if I didn’t get them for free!” There are times when Allen’s two vocations intertwine: people come into the shop, share a story, and it works its way into one of his songs. One of the standout tracks on the new EP is “Good Tattoo,” an ode to his wife and their everlasting love: “Our love is like a good tattoo/ It might fade a little along the way, but trust me babe, it’s here to stay.”