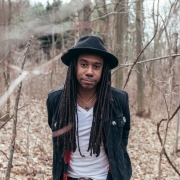 There’s a westbound wind
Blowing through the ridge again
You can stay in, or go outside
And wait for it to die
But either way, it never ends

Our past is always present. Even when we try to leave lost memories behind, they return in unexpected and unimaginable ways. How or why these pieces of our personal history reveal themselves is different for everyone. For Julian Taylor, the spark that took him on a nostalgic trip of contemplation started with death.

Not just the passing of one person, but losing everyone on his mom’s side of the family tree (three aunts and his step-grandmother) in quick succession. To process those losses, the singer-songwriter wrote a series of letters to those who cared for him when he was young, dictating them to his phone. These digital epistles became the skeletons for The Ridge. The new batch of songs was recorded at The Woodshed (Blue Rodeo’s studio in downtown Toronto) and released on June 19thin honour of his grandmother’s birthday, and Juneteenth (aka Emancipation Day) in the United States.

A mellow, acoustic departure from his work over the past few years with the  Julian Taylor Band (self-described “Pilgrims of Funk, Soul, and Roll”), The Ridge has surpassed 300,000 cumulative plays on Spotify and counting; earned rave reviews in publications across North America (including coverage from American Songwriter); and seen Taylor earn significant airplay on BBC 2 in the U.K., and on 70 stations in Australia, as well as accolades from fellow artists such as William Prince, AHI, and Rhett Miller (of the Old 97s). All of which is humbling for Taylor, who’s also the host of the weekday drive-time radio show on Indigenous-forward radio station ELMNT-FM in Toronto, and has been appointed to an advisory committee for the Toronto Blues Society.

“I’ve been banging on the wall for a long time,” he says. “You put something out and share it with the world and you just hope people will enjoy it.”

If they’re enjoying it, it’s because the songs connect with listeners, via universal themes to which they can relate. Some speak of hope and love (“Human Race,” “Ola, Let’s Dance”), but mostly, the songs look back to take stock of one’s place in the universe. Taylor cites one example of how these songs have resonated, describing a note he received from a Black farmer from the U.S. Midwest who told him how much “The Ridge” meant, as it dispelled the stereotypes that all Black folks live in urban areas.

Reviewers have commented that The Ridge is fresh, yet also has a vintage sound. “All my records sound like that,” Taylor says. “I’ve usually got one foot in the past and one in the future.”

Putting these lyrics and melodies to tape was therapeutic. Taylor tries to heal an unseen scar — one that’s haunted the musician, and marked his existence, ever since he was a child: his realization that he’s an outsider. This is especially true for the title song.

“People have asked me what The Ridge stands for,” the songwriter explains. “First, it stands for Maple Ridge, the short form for the place where I spent my summers growing up. It’s also a metaphor. The ridge is like a cut — a divide, in half, of me — not only from an emotional standpoint, but also from a social standpoint as a Black and Indigenous person growing up in a predominantly white experience.

“The Ridge speaks to the pain caused, and left in me, by losing those people so rapidly,” Taylor adds. “It also speaks to that split, and my feeling of not belonging.”

Taylor started singing and writing songs as a teen. Ever since, he’s been a staple of the Toronto music scene, and Taylor chronicles his early attempts to find his voice on “Ballad of a Young Troubadour.” He found success and a major-label deal on Warner Music Canada fronting Staggered Crossing in the late 1990s and early 2000s; more recently, he’s led the Julian Taylor Band. Despite his affiliation with these groups, the artist says he’s always felt he’s a singer-songwriter first and foremost.

Despite his gratitude for the record’s success, Taylor is struggling during the COVID-19 pandemic, and afraid of what the future holds. “I haven’t slept in four months,” he says. “I’m fearful of a lot of things. This time is not like any other I’ve experienced. It’s hard to explain. I’m scared for [the future of] the music industry and the hospitality industry… I’m scared for the next generation. Are they going to be a bunch of germaphobes? How do you teach people not to touch each other? That’s insane!”

While none of us have an answer to Taylor’s rhetorical question, or know when the pandemic might truly end, we do have his songs. And for now, that’s enough to help us heal.