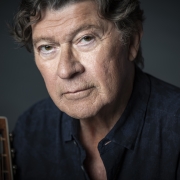 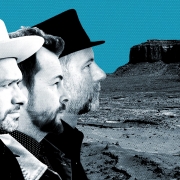 “And the seasons change/ Everything gets rearranged/ But tonight I’m stuck in a yesterday haze.” “Stay Out”

One thing the pandemic of 2020 has taught us is this: change is inevitable. No matter our job, or our financial situation, nothing is as it seems. We must adapt often. We must not fear change. We’ve been reminded what Greek philosophers said centuries ago: “Change is the only constant in this life.” No one understands this better than artists, who have chosen a career that — at the best of times — is one of the most precarious. As Elliott Brood captures in the lyrics quoted above, taken from the single “Stay Out,” everything gets rearranged; often, this leads to getting stuck.

“Nothing is normal ever even though we state it is,” says band member Mark Sasso. “Along the lines of that – as a band – we are good at always adapting and that is the new norm. I like that aspect of it. We like to put hindrances on us when we are recording anyways: record in small places or record over a short time. We are just using the new norm.”

Luckily getting stuck is not something Elliott Brood believes in. The band formed in Toronto in 2002. And nearly two decades on, the trio of talented multi-instrumentalists: Casey Laforet, Sasso, and Stephen Pitkin are still making memorable music for its legions of fans. After a dozen years roaming around from label to label the JUNO-award winners returned to the little indie (Six Shooter Records) who released their first full-length LP (Ambassador) back in 2005. In their absence, the label has grown, but kept the same ethos espoused by founder Shauna de Cartier: “Life is too short to listen to shitty music.”

“It’s good to be back,” Sasso says. “Casey was the first to suggest we should approach them again. They were our first family and have remained huge fans and supporters. We always felt like they are the ones that loved us, so it really felt like coming home. We’ve been wandering around and are now coming home to something familiar, to people who get everything we are doing and are 100 per cent behind it.” As de Cartier jokes, “the prodigal sons have returned!”

These prodigal sons are now older and wiser, balancing families and living apart [Laforet lives in Los Angeles and Sasso and Pitkin live in Hamilton]; yet, they are still making timeless and progressive music. Songs are fragments. Put together they often form a whole. When it comes to folk-rock trio Elliott Brood, usually it’s a complete puzzle – each song connects to the next. That’s is the case on their latest – the brilliant soundscape that is Keeper; a keeper of a record indeed, featuring 10 new songs released on Six Shooter September 18.

Fortunate for the band, Keeperwas more or less finished before the pandemic hit. It was mastered in March and originally scheduled for a May release. Keeper, a title Pitkin came up with, is all about relationships. We all have them. We all want them. And, sometimes – many times– we don’t know what to do with them. Laforet sums this theme up:

“All these songs have to do with people and relationships that you keep even when they are tough or damaged,’ he explains. “You could be that person to someone else … you are a burden to someone but they won’t ever let you down or let you go. That is the idea that runs through all the tracks in one way or another. Once the title came [Keeper] it made way more sense.

“We are still a full album band and are fans of that in the world of singles,” he adds. “We always try to put together a novel of sorts with some sort of story that flows through with sequencing.”

To help construct this novel of soundscapes and storylines in songs, Elliott Brood enlisted the help of some heavy hitters in the industry.  “Stay Out” one of the more poignant tracks that speaks to change, questioning, and uncertainty, and the overarching theme of relationships with these lines: “I got healthy kids and a beautiful wife/ But I don’t wanna go home/ I’m proud and thankful and terrified/ But I don’t wanna go home,”was mixed by Ryan Hadlock (The Lumineers) and engineered by Daryl Neudorf (Neko Case).

The songs were written over the course of several years in a variety of locales, as the band is known to do. Songs were penned during a three-day sojourn last summer in a cabin in the Swiss Alps following a performance at CosmoJazz Festival in Chamonix/Mont Blanc.Other sounds and ideas were gathered during a five-day Artist in Residence stint at the National Music Centre (NMC) in Calgary, Alberta in 2018, where a band already known for experimenting with different instruments added some cool new sounds made with vintage instruments they discovered at this museum such as the world’s first synthesizer Novachord and the melotron. “We came out of there with some cool ideas, new tones, and a different palette,” says Laforet. This is seen most clearly on songs such as “Oh Me,” and “The Coast” with its synth folk-rock feel.

The pandemic has made the trio adapt in other ways: getting more familiar with technology and figuring out how to market and promote a new record without the usual cycle of touring. They enlisted an animator and made a video while in quarantine for the first single “ “ and they joke maybe they will make videos for every song on Keeper.

“We might as well make videos,” says Sasso. “Maybe we will do a Beyoncéthing. The Lumineers did that; they made a short film for their last record. It was all a narrative, one long movie set to 10 songs. Regardless, we understand we need to get more creative and learn new stuff.”

Despite the uncertainty of when the live music industry will return, Laforet is confident the band will survive and their legions of fans will stick around for the ride.

“I think of our band as the small Canadian town of bands because we play those places,” he concludes. “Some of our best shows are in those places where no one goes. For us, it’s not about major markets, we can do a 10-town tour and that is what we will do when we get back to it. Those people keep coming back. I wouldn’t come see us 20 times, but it’s reassuring that they keep coming. I feel like what we’ve built over the last 18 years will be waiting on the other side.”

Published in the Summer/Autumn 2020 issue of Penguin Eggs.