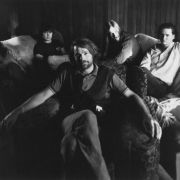 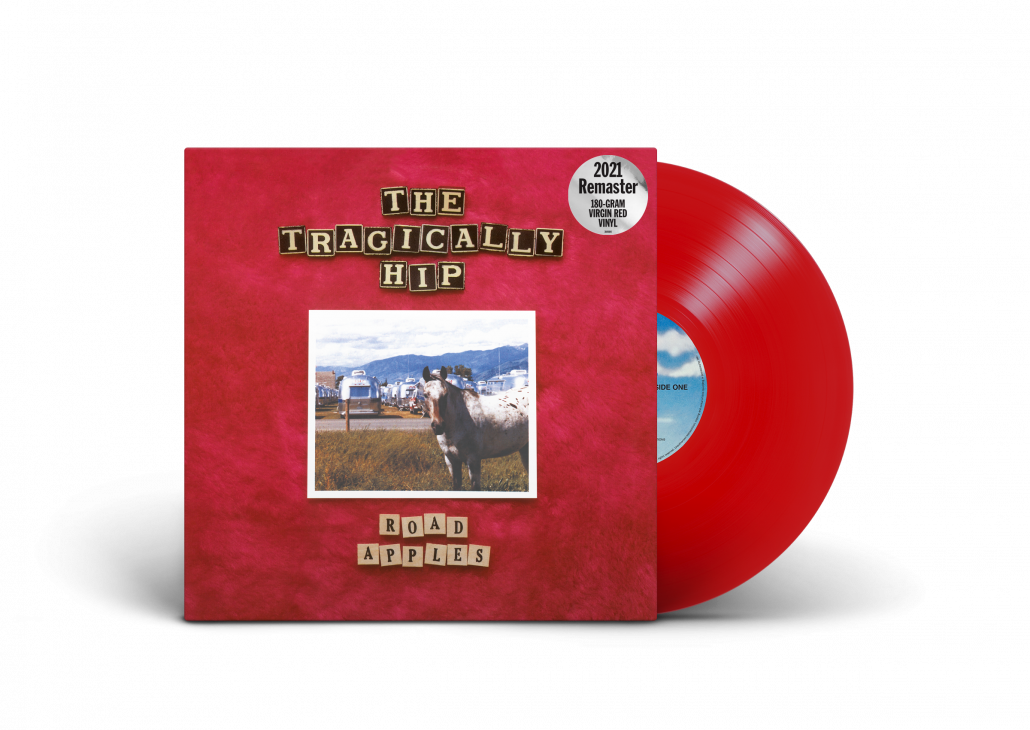 A dozen songs that clock in just shy of 50 minutes with hooks aplenty, I bought Road Apples in Grade 12. In the ensuing decades, it’s been played more than most of my 1,500 CDs. I also own the vinyl. Thirty years on, I still know the words to every song. And, when I sing along I’m taken back to those carefree—and awkward—high school years cranking these tunes, alone in my bedroom, at a friends’ cottage in Muskoka, or in my parent’s car—rolling down the highway with my best buds en route to a Hip show.

My love affair with The Tragically Hip began with Up to Here, but Road Apples is where my adulation for these Kingston boys really bloomed. My friends and I saw them live every chance we could whether at a weekend festival such as Courtcliffe Park in Carlisle, Ontario on July 6, 1991, or at the old Ontario Place Forum later that summer. One look at that ticket price, $10.55 for a seat on the lawn, confirms this event happened 30 years ago.

This was a band my friends and I understood. There was no twisting our arms to make us like these Canadian alternative rockers. From the start, we were all in. Never in my wildest dreams did I fathom while I was rocking out with a bottle of Molson Export in my hand at a high school house party to “Little Bones,” and “Three Pistols,” that three decades on I would jump on a Zoom call to chat with Hip guitarists Paul Langlois and Rob Baker to reminisce and take a deep dive into the making of Road Apples—The Tragically Hip’s first record to reach No. 1 in Canada.

Take a trip now. Close your eyes. Join the band down south in New Orleans. It’s early September 1990. The air is hot and heavy. Here’s where the road to Road Apples begins. Stroll into the French Quarter, down Canal Street, and into one of the older residential neighbourhoods. At the corner of Chartres and Esplanade, stop at 544 Esplanade and enter this 19th century mansion.

Known as Kingsway, Daniel Lanois—the Canadian Grammy-winner and creator of countless sonic journeys—owns and operates this studio. Haunted? Perhaps. No matter, the ambience and the weight of history within this 12,000 square-foot home were palpable from the moment the five members of The Tragically Hip, along with their A-list production team (Bruce Barris and Don Smith) crossed its threshold. Kingsway was the perfect milieu for the birth of Road Apples. Other artists who were drawn to this studio during the 1990s included Peter Gabriel, Bob Dylan, Emmylou Harris, Pearl Jam, R.E.M., and Iggy Pop. “We discovered Lanois had this great beautiful hidden mansion studio down in the French Quarter and we were all in!” Langlois recalls.

“You felt the history all around you,” Baker adds. “I don’t believe in ghosts, but if there were ghosts that is the type of place where you are going to see them. The home was three storeys, but five storeys in the back where the slave quarters were once located … that is the history you are in. It was a strange place in a strange city where a lot of different cultures meet. In New Orleans, there is a lot of good history and a lot of bad history meeting in one spot and we just soaked it all up.”

Before setting foot in this historic manor featuring 12-foot high ceilings, the band spent several days rehearsing in a wooden warehouse in the Ninth Ward. Again, the musical history of this locale was not lost. This district was where rock ‘n’ roll pioneer Fats Domino called home. “It must have been 105 degrees,” Langlois says, of this rehearsal space, “but it was a great way for us to acclimatize to the city … we also got two songs out of those sessions: ‘Little Bones’ and ‘The Last of the Unplucked Gems.’”

The band arrived in New Orleans with the bones to the rest of the songs that eventually appeared on Road Apples. They just needed to assemble the skeleton and flesh them out until they sounded just right. “We felt we already had the makings of a great record and then ‘Little Bones’ comes along,” Langlois comments. “We are all big music fans and there are certainly music historians in the band—I can’t say I’m one of them—but the New Orleans’ culture was something that really fit us. We all felt the vibe and we soaked it in.”

The decision to record in a different location, one that oozed history, culture, and music was something MCA Records’ Bruce Dickinson believed was not just important, but essential, for the band’s studio success. “He felt we needed to get away from friends, family and record company executives who might drop in if we were recording in Toronto,” Langlois explains. “Bruce wanted us removed from all the distractions.”

This vibe definitely kicked the record up a notch and added to the atmosphere and grittier sound found on Road Apples. One wonders if setting up shop in New Orleans—a city known for its temptations (especially at night)—might have blocked productivity? For The Tragically Hip, these diversions did not steer them away from their purpose in the slightest. The band was there with a clear objective: to make and play music. And, since the studio was in a residential district, by 10 p.m. they had to be mindful of neighbours. “You had to tone it down,” says Baker, “so mostly we went into listening mode or acoustic mode. Some nights we went out, but we were pretty restrained.”

Lanois had set up a classic pool table in the house and it was perfect for when the band needed a break. The room was so large that that’s also where they did the bulk of the recording; all five guys played in the same room with monitors and without headphones. The Hip arrived in New Orleans having played hundreds of shows over the past year and a half. Smith understood how tight the band was and the necessity for them to record as if they were performing live. Langlois says Smith was their kind of guy: funny, low-key, and cool. “We were just happy, and frankly, a little surprised that he saw what we were trying to go for. We felt understood by him and that came through in his methods.

“Don was a master at getting the sound of a room through which mics he used and where he put them,” Langlois continues. “He wasn’t overwhelmed by any of it and we all had massive respect for him.”

Baker agrees. “When Bruce [Dickinson] suggested Don to us to produce Up to Here we weren’t immediately familiar with his name. Bruce told us, ‘Well, he just finished the Keith Richards solo album’ and the recent Roy Orbison album.’ ‘Ok’, we said, ‘he sounds like our guy.’ When we got to Memphis to do Up to Here we waited for like three days for him to arrive. I was prepared for Don to adjust my mic, and say stuff like, ‘I don’t want you to use that amp,’ ‘switch your guitars,’ and ‘change your sound,’ but there was none of that. He just wanted to capture the sound of us as we were and what we were about. He didn’t want to push us around in the studio and produce us in some grand sense. While that caught me off guard initially, it really gave us all added confidence.”

Smith: A Master and a Stickler for the Take

Smith was also what Baker refers to as a stickler for the take. “He wouldn’t press record until it sounded just right, which might take five days of pushing mics around and moving one a couple of millimetres,” he says. “Don was a master at the old school method of recording that he learned by working Frank Sinatra and Elvis Presley records in the Capitol building. Once it sounded right he pressed record and we would play and play and play and then he would say, ‘It was really good, now do it again … “Fight take 86!’”

Thirty years on, sadly many of the players who convened in Kingsway Studios in that sultry September in New Orleans are gone (including The Tragically Hip frontman Gord Downie, along with producers Don Smith and Bruce Barris). Yet, the songs live on. They’ve also aged well. For the remaining four members of the band, listening to, and working on, the new anniversary box set, brought mixed emotions.

“Any little thing can bring Gord back because all of us were such good buddies,” says Langlois. “It’s just too bad they are gone. But, on the other hand, listening to all the music, it sounded way better than I was expecting—particularly Saskadelphia. I didn’t think I would be that blown away by it. It was a great feeling of accomplishment. Adds Baker, “When I heard the tapes, it felt like the band was playing in the room with me. At the time, we were playing 250 shows a year and had been doing this for three years, so we had a lot of playing under our belts. We were feeding off each other in a really intuitive way. The ideas were flowing and we were playing really well together. All you had to do was pop the tapes on before they were even mixed … it just sounded like the band was right there.”

Road Apples 30th Anniversary Deluxe was released on November 12. All tracks were completely remastered in 2021 by Ted Jensen at Sterling Sound in Nashville, TN. The deluxe edition features rarities, new discoveries, live recordings, and ‘unplucked gems’ from the Road Apples sessions and era.