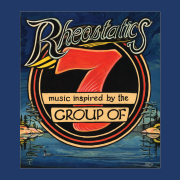 Music and art are natural friends. Many musicians don’t just paint pictures with words and melodies; they also pour these creative thoughts onto canvases. Tom Wilson, Kurt Swinghammer, and Joni Mitchell are a few examples of multi-talented Canadian artists who express their creativity and imagination across disciplines.

In the fall of 1995, The National Gallery of Canada (NAC) in Ottawa, Ont., through a local DJ and promoter at CKCU-FM, approached alternative art-rock band the Rheostatics and commissioned them to write and perform a concert of original music to accompany a Group of Seven 75th anniversary retrospective. Most Canadians, even if they are not art collectors or art historians, are aware of the Group of Seven. Sometimes referred to as the Algonquin School, this collective of famed Canadian landscape artists included: Franklin Carmichael, Lawren Harris, Frank Johnston, A.Y. Jackson, Arthur Lismer, J.E.H. MacDonald, and Frederick Varley. Operating from 1920 to 1933, their evocative and impressionistic works symbolized our national identity.

The Rheostatics—one of Canada’s most beloved indie-rock bands of the last 35 years—were perfectly suited to capture the Group of Seven’s spirit through music. The band had so much fun in the studio writing and creating these instrumental songs that following the curated sold-out concert at the NAC, they returned to the studio to make a full-length record. The result—Music Inspired by The Group of Seven—was released 25 years ago, in 1996. “That record is interesting because we had just come off a cross-Canada jaunt with the Tragically Hip as part of the Another Roadside Attraction tour,” recalls Dave Bidini, a founding member of the band. “We had some relative commercial success with the single ‘Claire,’ at that time too and, through that tour, had made more inroads in the industry. We followed that success up with a completely instrumental record. That was a weird, and problematic career move, but it’s also a very Rheostatics thing to do.”

It was an honour, Bidini adds, just to be asked to participate in this project. “I remember the Hip guys saying to me at the time, ‘It’s not fair! You guys get to do all the cool records!’”

After agreeing to this cool commission, the Rheos gathered at Gas Station Studios in Toronto’s east end, the birthplace of many Canadian indie rock records, and set to work. Long before they picked up their instruments, or struck a note, they spent time creating the right mood for contemplation and creation. “It was more like a film shoot,” Bidini says. “We started off by collecting all of these materials and doing a lot of non-music work.” The band decorated the studio with art and other inspiring images. Guitarist Martin Tielli, also a talented visual artist, poured over books of the Group of Seven’s most famous works. Bidini brought in some records from his collection to play on the old gramophone in the studio. These unique LPs included speeches from former Prime Ministers including William Lyon Mackenzie King and John Diefenbaker as well as Queen Elizabeth, along with interview clips from Newsy Lalonde, an NHL player and professional lacrosse player from the early 20th century. Kevin Hearn brought in additional sampled wilderness sounds like frogs and crickets. Bidini describes these found sounds as: “Cool dashes of spice, sonically and historically, that helped tie us all back to the crazy size of the country and try to reflect that in this recording.”

Music Inspired by the Group of Seven was the first Rheos’ album to feature Don Kerr, who replaced original drummer Dave Clark. He brought a new energy to the group and a keen ear to the production. Kerr met the Rheostatics for the first time when the band recorded demos for their previous record (Introducing Happiness) at Gas Station Studios, which he co-owned and operated at the time with Dale Morningstar.

Kerr’s biggest contribution to this record was the idea to interview visual artist Addison Winchell Price. Kerr met the landscape painter, who worked alongside the Group of Seven, years before. Through a series of edited conversations, Price offered observations on the connection between art and music that provides a narrative thread that ties the album together.

“Dave had brought in funny recordings of people talking about trains and a poem read by the Queen and somewhere in there I was like, ‘I have this old family friend, who is an artist, is brilliant, and his voice is amazing, why don’t I interview him?’” Kerr recalls. “I called him up and talked to him for two hours and just recorded it. It was emotionally moving … so grand and beautiful the way he talked about the link between music and painting and being an artist. We combed through the recording, found the best stuff, and used these to string the songs together for the live show and later for the record. It was a nice addition…as close as we could get to having a Group of Seven member on there.” Bidini agrees: “That is the golden thread…where the album went from a collection of instrumental songs to a cohesive concept album.”

Kevin Hearn also concurs. “The conversations with Price are the heart and soul of the record.” Like Kerr, Hearn became an additional member of the Rheostatics for this album. Hearn was playing with the Look People then, and he had yet to join the Barenaked Ladies full-time. Hearn describes the Look People as “Frank Zappa meets Dr. Seuss.” They shared a rehearsal space with the Rheos and the keyboardist and multi-instrumentalist often sat in with them. They became fast friends and eventually they “invited [Hearn] into their orbit.” The Toronto native was a classically trained pianist, but with the Look People, Hearn was experimenting with synthesizer sounds on his Korg T3. Working on Music Inspired by The Group of Sevenwas a refreshing change and the experience renewed his childhood love for the piano. “There was a Yamaha piano at the Gas Station Studios and it felt right to use it,” Hearn recalls. “I got to go back in time to my roots. This album was a reconnection for me as a pianist and that was an amazing thing for me as an artist. It also fit perfectly with the palette of this music.

“I was not an art expert, but I knew who the Group of Seven were,” Hearn continues. “I remember thinking back then—even though I don’t know who did what—I know the source that inspired their art. All of the Rheos grew up in Canada and spent time in northern Ontario at summer camps, taking canoe trips, and going to cottages. I felt well suited to do this and I loved every minute of it.”

Once the band got down to writing the songs, despite the project’s vast scope, the songs came quickly. The studio became a rehearsal space. The process was a raw, spontaneous, fun, and collaborative affair. “I loved the harmonious way the Rheos worked,” Hearn says. “Each member brought an idea to the table and each idea was treated equally, respectably and enthusiastically. That made me feel comfortable, and for that I’m very grateful.”

The end result of this collaborative affair was a record of mostly instrumental mood music featuring a dozen songs that beautifully capture the Group of Seven’s spirit. Starting in the fall of 2015, to mark the 20th anniversary of the original NAC concert, the band performed the record in its entirety during a series of concerts at art galleries across Canada. Twenty-five years on, the record still resonates and deserves another listen.

“For me, because we were imagining music inspired by paintings and the north evoked by somebody who lived in the city, that record has as much High Park and Humber River in it as it does Tobermory,” Bidini concludes. “Even though I write about Canada—the country—I’m mostly a Torontonian. The album provided me with the liberty of imagining the north as opposed to portraying the north. From touring, I knew Canada from bar to bar, club to club, not from provincial park to natural landform. I, and the rest of the band, had the license to dream it, and we did! When I listen to the songs today, I can see and feel the corner of Liberty and Atlantic—pre hipster Toronto, pre Liberty Village, as much as I hear Algonquin Park.”

MUSIC INSPIRED BY THE GROUP OF SEVEN FAST FACTS

RECORD: Music Inspired by The Group of Seven

MASTERED BY: Joao Carvalho at the Dub House